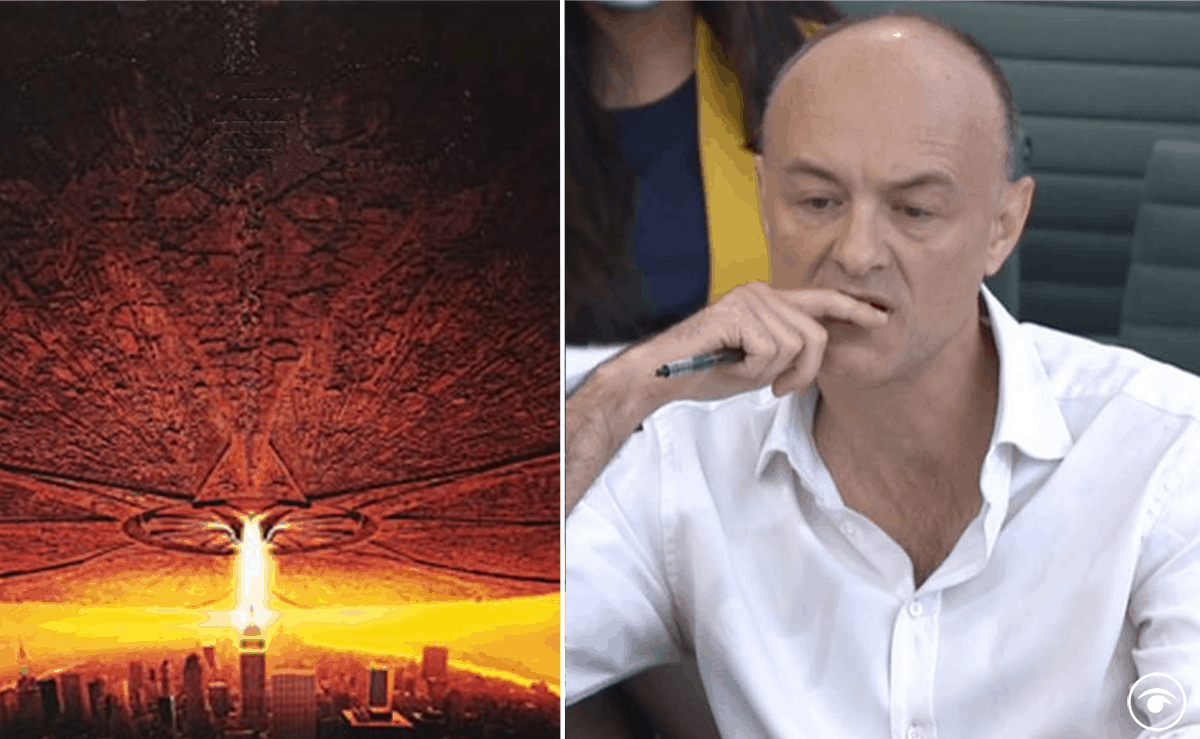 Dominic Cummings has described chaos in Downing Street in the days leading up to the first Covid lockdown, with a “scene from Independence Day” and the Prime Minister’s fiancee Carrie Symonds going “completely crackers” over press coverage of her dog Dilyn.

Boris Johnson’s former chief adviser told MPs the country should have locked down the first week of March 2020 at the latest but the “official logic” even on March 17 was that this would only cause a peak of the virus later on.

He claimed the Government’s delay in locking down and lack of action plan was similar to 1996 disaster film Independence Day in which the US is devastated by a surprise alien invasion, and compared his data expert colleague Ben Warner to Jeff Goldblum’s scientist in the film whose warnings were ignored.

He told the committee of MPs the situation at the time was: “This is like a scene from Independence Day with Jeff Goldblum saying, ‘the aliens are here and your whole plan is broken, and you need a new plan’.”

Mr Cummings said: “One of the critical things that was completely wrong in the whole official thinking, in Sage and in the Department of Health in February/March was first of all the British public will not accept a lockdown, secondly, the British public will not accept what was thought of as a kind of East Asian style track and trace type system, and the infringement of liberty around that.

“Those two assumptions were completely central to the official plan and were both obviously completely wrong.”

Mr Cummings said he felt “mounting panic” about the response and was pushing on March 11 and 12 for the Government to announce that individuals should stay at home if they had symptoms and households should quarantine.

But he said there was “push back from within the system” and “me and others were realising at this point the system is basically delaying announcing all of these things because there’s not a proper plan in place”.

He added: “As far as I could tell from Sage, and as far as the minutes show, the fundamental assumption remained we can’t do lockdown, we can’t do suppression, because it just means a second peak.”

Mr Cummings said March 12 was a “completely surreal day”, starting with him texting the Prime Minister at 7.48am saying: “We’ve got big problems coming.

“The Cabinet Office is terrifyingly s***, no plans, totally behind the pace, we must announce today, not next week, ‘if you feel ill with cold or flu stay at home’.

“Some around the system wanted to delay because they haven’t done the work.

“We must force the pace, we’re looking at 100 to 500,000 deaths between optimistic and pessimistic scenarios.”

He said the day got derailed from dealing with Covid because in the morning “suddenly, the national security people came in and said ‘Trump wants us to join a bombing campaign in the Middle East tonight’… and we need to start having meetings about that through the day with Cobra as well.

“So everything to do with Cobra that day on Covid was completely disrupted because you had these two parallel sets of meetings, you had the national security people running in and out talking about ‘are we going to bomb the Middle East?’… And then to add to it, it sounds so surreal it couldn’t possibly be true, that day The Times had run a huge story about the Prime Minister and his girlfriend and their dog, and the Prime Minister’s girlfriend was going completely crackers about this story and demanding that the press office deal with that.

“And you have all these meetings kind of going on through the course of the 12th.”

He said he had a meeting with advisers Ben and Marc Warner around 9pm “when they kind of hit the total panic button with me and they said, ‘we’re looking at all this data, we’re looking at all of these graphs, we’re heading for a total catastrophe and we need to have Plan B’.”

Mr Cummings said that on the evening of March 13 it was realised that a meeting would need to be held with Mr Johnson to explain “we’re going to have to ditch the whole official plan, we’re heading for the biggest disaster this country has seen since 1914”.

Mr Cummings has tweeted a picture from this evening, which he called the “first sketch of Plan B, PM study, Fri 13/3 eve – shown PM Sat 14/4”.

He said the “second most powerful official in the country” at the time, Helen MacNamara, who was deputy cabinet secretary, walked into the room during the meeting with Ben Warner on March 13 and said: “I’ve just been talking to the official Mark Sweeney who is in charge of co-ordinating with the Department of Health. He said, quote, ‘I’ve been told for years that there was a whole plan for this. There is no plan. We’re in huge trouble’.”

Mr Cummings said she told him: “I think we are absolutely f*****, I think this country is headed for disaster, I think we’re going to kill thousands of people.”

Mr Cummings said he told her: “I think you’re right. I think it is a disaster.”

He said that on March 14, the Prime Minister was told: “You are going to have to lock down.”

But Mr Cummings added: “But there is no lockdown plan. Sage haven’t modelled it, DH don’t have a plan, we are going to have to figure out and hack together a lockdown plan.”

He added: “This is like a scene from Independence Day with Jeff Goldblum saying, ‘the aliens are here and your whole plan is broken, and you need a new plan’… that is what the scene was like that morning, with Ben Warner in the Jeff Goldblum role.

“He took the Prime Minister through all the graphs, and through the NHS graphs, and showed him that the system is thinking this is all weeks and weeks and away… but this is all completely wrong… The NHS is going to be smashed in weeks.”

Mr Cummings said it was a “huge failure” on his own part that he did not push harder for an earlier lockdown.

He said: “I bitterly regret that I didn’t kind of hit the emergency panic button earlier than I did.

“I think, in retrospect, there’s no doubt that I was wrong not to.”

He said he was “incredibly frightened” to say the official plan was wrong in case he himself was wrong.