With a lockdown battle brewing, today's PMQs is one heavyweight bout you don't want to miss. 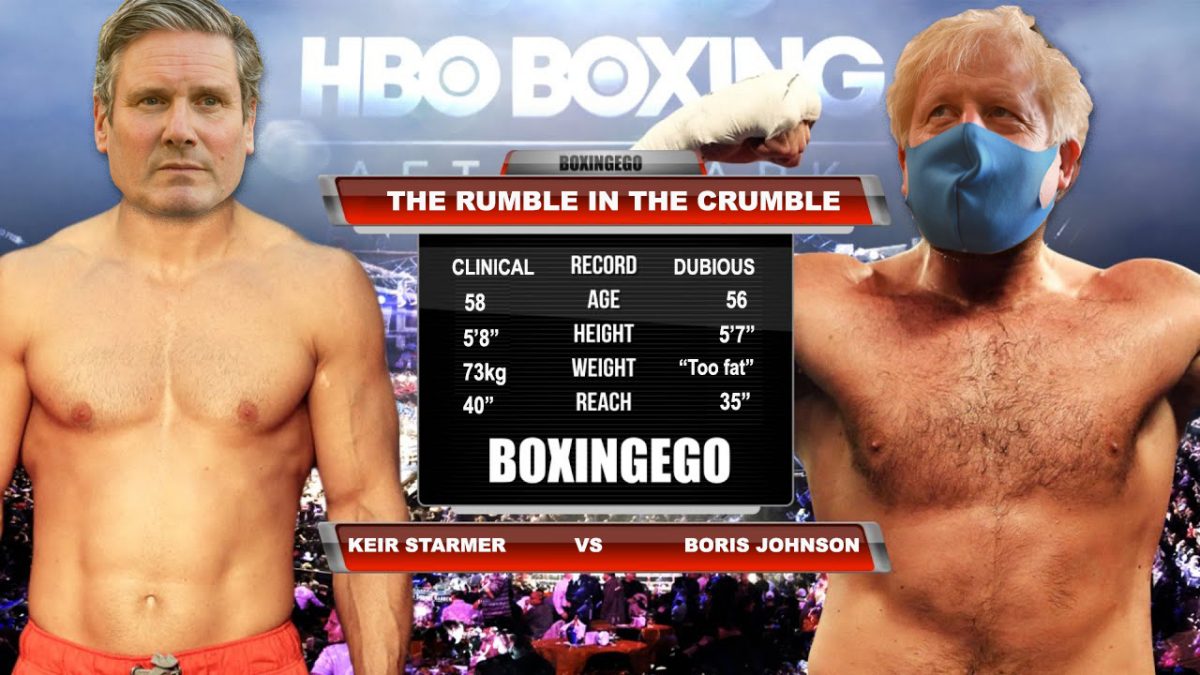 It feels like a cheap joke at the prime minister’s expense to refer to anything he does as a ‘heavyweight clash’. But, for fans of bad jokes, awkward put-downs and grown men (and it is almost always men) whooping and hollering like they’re on the terraces, there’s only one place to be today.

Whereas football fans wait all week for the clock to hit three o’clock on Saturday, politicos set their watches for noon on Wednesday.

Spurred on, inevitably, by their days in university debating clubs, political journalists will soon be dusting off phrases like ‘SHOTS FIRED FROM STARMER’ and ‘BRUTAL FROM BORIS’ as the prime minister and the leader of the opposition face off at the despatch box once more.

The weekly meetings between Boris Johnson and Sir Keir Starmer have quickly fallen into a steady rhythm. The Labour leader points out one of the government’s myriad failings in dealing with Covid-19, and Johnson harangues his opposite number for carping from the sidelines and insufficiently backing Britain.

But, really, there has been little daylight between the government and the opposition when it comes to fighting coronavirus. Since the spring, Sir Keir has been engaged in a tetchy process of constructive criticism, supporting Downing Street’s efforts to contain coronavirus while pointing out the odd flaw along the way.

That changed last night, when Starmer held a press conference to urge Johnson to enact a two or three week ‘circuit-breaker’ lockdown to try and bring the virus under control. The Tory response quickly emerged. Johnson, on a Zoom call with his restive MPs, reportedly accused Sir Keir of “playing politics” with the pandemic – a phase we’re likely to see repeated at PMQs.

Labour, on the other hand, will believe that Starmer’s gambit will have forced the government into a U-turn in the coming days – much to the disappointment of flailing pubs and restaurants up and down the country.

So, and I am sure that I will immediately regret writing this the second Johnson labels his opposite number ‘Captain Hindsight’ or ‘Sergeant SAGE’ or something else intolerable, PMQs today is actually a bout worth setting your alarm clock for.

IN THE RED CORNER…

…We have Sir Keir Starmer, the perfectly-quaffed prosecutor who seems to have finally stopped jabbing at the Tories, and is set to swing a big right-hook at prime minister.

On Sir Keir’s team today is science, a rather nebulous entity that the Labour leader’s opponent once took pride in following come what may. But the white-coated SAGE-sayers seem to have switched sides, turned off by Johnson’s reluctance to listen to their concerns.

The FT reports today that two SAGE members, who sit on the influential Scientific Pandemic Influenza Group on Modelling, have compiled a paper revealing that a ‘circuit-breaker’ lockdown – timed to coincide with half-term – would save around 3,000 lives.

Expect Starmer to ask Johnson why he suddenly seems unwilling to follow his scientific advisers’ advice, and why he is reluctant to take action that might save the lives of thousands of Brits.

Also in Sir Keir’s corner is something that football pundits insist is “a funny thing in sport”: momentum. No, not that Momentum. Although Starmer stuck his head over the parapet and called for a new lockdown yesterday, it had started to feel like we were moving inexorably towards one anyway.

According to this morning’s papers, government officials are already discussing how and when to implement new restrictions. The Sun quotes a “close Cabinet colleague” to Johnson saying there’s a 60 per cent chance a lockdown is introduced over half-term. The Telegraph has a “senior source” putting the chances at 80 per cent.

Not for the first time, Johnson has started to resemble King Cnut – trying desperately to hold back the tide of scientific, public and political pressure.

IN THE BLUE CORNER…

…Well, it’s only bloody Boris! BoJo! Bozza! BJ! No crisis is too big for a wee bit of Latin here, a faux Churchillian flourish there and a well-aimed attack at the unpatriotic opposition can’t fix.

The prime minister is currently under attack from all sides. Opposite him, Sir Keir smells blood and will be on his case for not introducing new Covid restrictions fast enough. Behind him, the crusading Conservative libertarians are furious that Johnson has gone too far.

The Sun this morning urges the PM not to “surrender control to the erratic scientists of SAGE” and “buckle to the immense pressure”. A PPS, Chris Green, quit yesterday – angry at the impact of new restrictions on struggling businesses.

So it looks as though Johnson is damned-if-he-does and damned-if-he-doesn’t. The last thing he will want is to look like he is being pushed into action by Labour, but a refusal to follow Sir Keir’s lead could open him up to the very accusation that he is seeking to level at the opposition: that he is playing politics rather than prioritising the health of the nation.

Look, it’s hardly going to be Foreman-Ali or Joshua-Klitschko. It probably won’t even be as good as that time Freddie Flintoff went twelve rounds with that enormous American bloke. But, as PMQs goes, this is one you don’t want to miss.