It comes as the footballer backed a new campaign to end the child hunger pandemic in the UK. 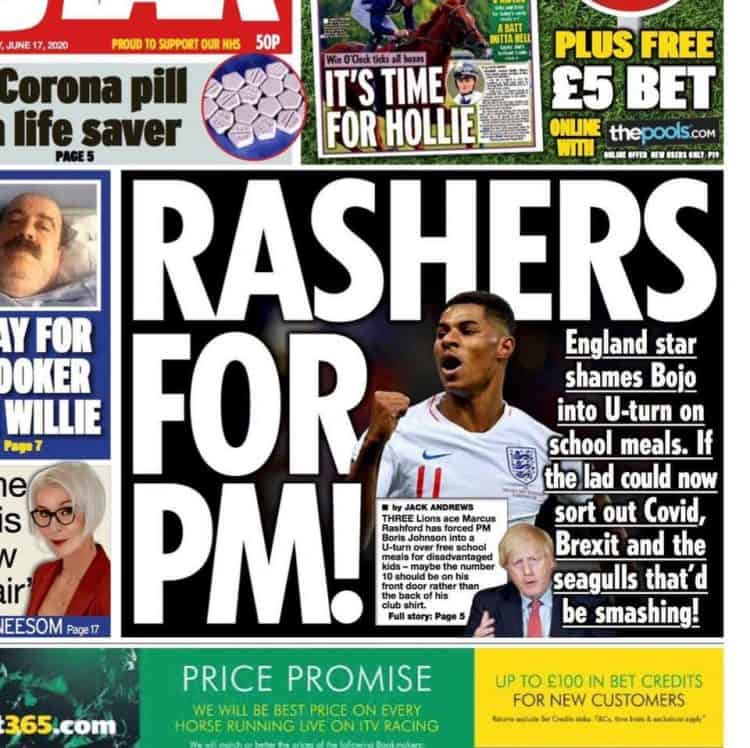 A fan page set up in a bid to make Marcus Rashford the next prime minister has started gaining traction on Facebook.

The Manchester United and England forward launched a fresh campaign to end the child hunger pandemic today, calling on Brits to write to their MP about backingHenry Dimbleby’s National Food Strategy.

As part of the recommendations, he is urging the government to expand free school meal eligibility to all children aged 7-18 in all households earning £20,000 or less after benefits, and to children that are undocumented or living in immigrant households with “no recourse to public funds” (NRPF).

Providing long-term funding for the Holiday Activities and Food Programme and expanding Healthy Start eligibility are also among the requests.

New data from The Food Foundation shows that more UK households with children aged 17 and under are experiencing food insecurity than in the first wave of the pandemic.

A survey of 6,490 UK households found that 15 per cent have experienced food insecurity in the past six months – levels that are approximately 27 per cent higher than before the pandemic.

Rashford said: “Whilst we’ve come a long way in the last 20 months, placing the issue of child food poverty at the forefront, devastatingly, the issue is getting worse not better.

“The entire nation got behind the national team this summer so let’s put these figures in football terms: You can fill 27 Wembley stadiums with the 2.5 million children that are struggling to know where their next meal might be coming from today.

“What is it going to take for these children to be prioritised? Instead of removing support through social security, we should be focusing efforts on developing a sustainable long-term road map out of this child hunger pandemic.”

Speaking to Good Morning Britain on Monday, Dimbleby said Rashford was an “amazing” voice for the cause, adding: “He’s lived it.

“He can really talk to the experience and he gets rid of this idea that somehow this nanny state-ism or this is things that families should be able to do for themselves by painting a picture of what it’s like to be in that situation.”