Quoting Churchill, he said: "We will not give up, and we will not lose, we will fight until the end, in the sea and in the air, we will continue fighting for our land whatever the cost." 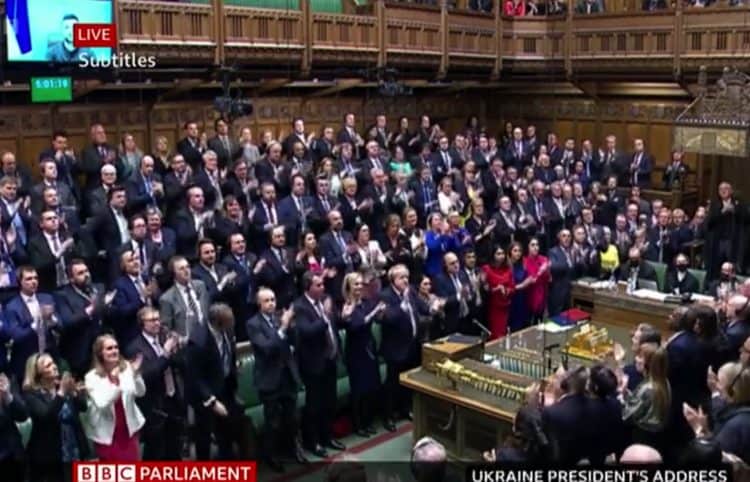 Ukraine’s president Volodymyr Zelenskyy received a standing ovation from a packed House of Commons following a powerful speech this evening.

Addressing the floor by video link from Ukraine, he likened the war with Russia to Britain’s efforts in World War II.

“On day one at 4am we were attacked by cruise missiles, everybody woke up, people, children, the entire Ukraine and since then we have not been sleeping,” he said. “We have all been fighting for our country.”

He said Ukraine then faced airstrikes, but when Russia demanded they lay down arms, Ukrainians “continued fighting”.

Mr Zelenskyy continued to explain how the war unfolded day-by-day, saying constant shelling has taken place across the country.

He said the question for Ukraine now is “to be or not to be.”

“For 13 days this question could have been asked but now I can give you a definitive answer, it is yes, to be”.

Quoting Winston Churchill’s speech to parliament during the Second World War, he said:

“I would like to remind you of the words the United Kingdom have already heard which are important again. We will not give up, and we will not lose, we will fight until the end, in the sea and in the air, we will continue fighting for our land whatever the cost.

“We will fight in the forests, in the fields, on the shores, in the streets.”

He added that Ukraine is “looking for your help”, adding: “We are thankful for this help and I am grateful to you Boris”.