Like the rest of his gilded existence, Boris was once again everywhere and nowhere. 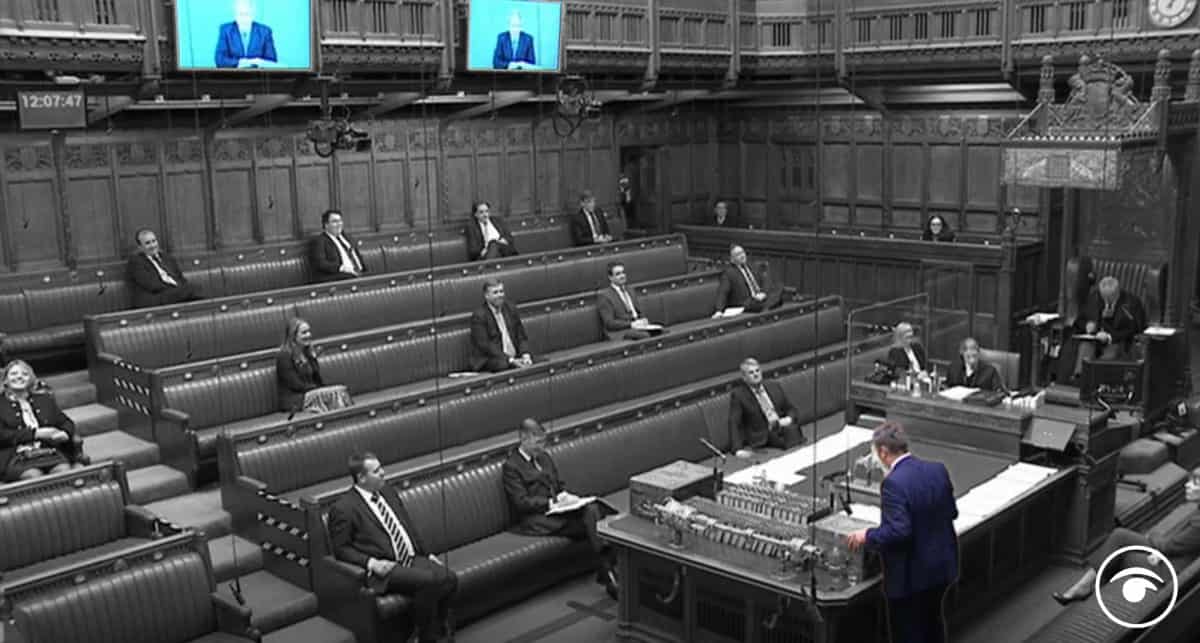 The Zoom (other life-sapping video meeting software is available) quiz is back. I’ve been trying to avoid them… we all have.

Today we got to watch the political version, with Boris Johnson streamed into the chamber on video link with a dodgy microphone, dodgy internet and a well-tuned knack at dodging tricky questions in tow.

It was a first for parliament, and must have wound up luddite Jacob Rees-Mogg on his one man crusade against virtual participation.

The picture round was easy enough. Name the useless politician with unkempt hair and no pants on.

There is always someone on a quiz who everybody wishes hadn’t turned up (speaking from grim experience), and self-isolating Johnson would not have been missed today if he decided to not bother.

“Look Boris you really don’t have to join, we know you are self-isolating.”

“Oh you are sending Dominic Raab instead? Alright, see you at noon.”

Johnson on webcam or Raab in the flesh – it’s Sophie’s choice. Raab has got that sort of strained smile that makes it seem like he’s keeping someone hostage in the basement. At least this brave new virtual world gives us the chance to mute Boris Johnson.

Imagine the bother we’d all have been spared if Have I Got News For You had decided to do the same all those years ago.

So, like it or lump it, there Boris was on every screen in the House of Commons. That crashing you heard in the background was Zoom’s share price plummeting through the floor like an untethered elevator.

But it did seem fitting, like in the rest of his gilded existence, that Boris was at once everywhere and nowhere. Our omni-absent prime minister.

You couldn’t even see the Winston Churchill posters and Pericles manuscripts that presumably adorn his Downing Street flat on the screen behind him.

Instead it looked and sounded like Johnson was speaking to us from inside a tin can. I half-expected Carrie Symonds to stride past stabbing a voodoo Dom doll.

Maybe she was there, because he kept sneaking a peek to the right. Perhaps she was holding a prompt card reading “garble garble then cut off your microphone”, as that was the strategy that Johnson stuck to throughout today’s session.

Did the prime minister answer any questions today? Not even remotely (boom boom).

Sir Keir Starmer told him that “the single biggest threat to the future of the United Kingdom is Boris Johnson’s mouth” and pushed him on the £21 million handed out to a middle man for PPE and the billions handed to Tory friends.

But Boris wasn’t having any of it. The argument seems to be: “We gave as much money as we could, to our mates, with the least scrutiny possible, but you got a few gowns out of it didn’t you? Nothing to see here.”

The SNP’s pint-sized Braveheart Ian Blackford had a go too. “Over the past 20 years, Westminster has imposed an extreme Brexit, an illegal war in Iraq, £9,000 Tuition Fees, the Windrush scandal, the rape clause, the bedroom tax and a decade of Tory austerity cuts which have all pushed millions into poverty,” he bellowed. Can you tell he doesn’t like English politics all that much?

But Johnson brushed it all aside, unlike his hair, and there was no mention of Jeremy Corbyn or Dominic Cummings today either. There seemed to be a virtual truce, I’ll not show you yours if you don’t show me mine.

There wasn’t enough space for the two elephants in the Zoom.

Related: PMQs – Pfizer’s fizz will wear off but a hard Brexit will leave the economy flaccid