A Labour MP was cut off by the Speaker for drawing attention to Johnson's alleged Islamophobic remarks. 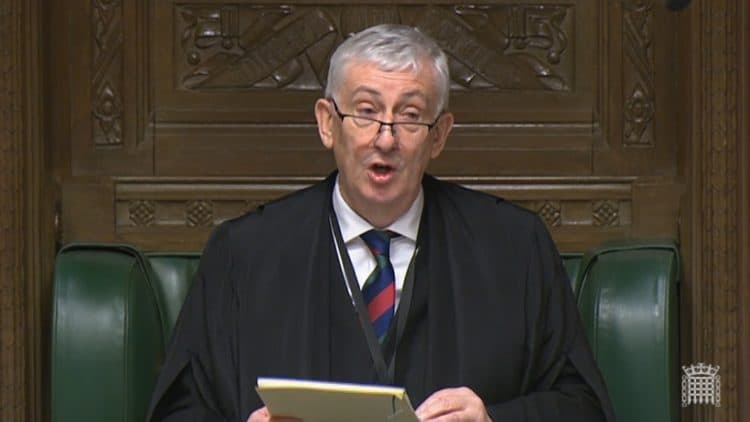 Parliament is “not the appropriate place” to be highlighting concerns about Boris Johnson’s remarks about Muslims, the Speaker has called.

At Prime Minister’s Questions on Wednesday, Labour MP Imran Hussain said that Johnson was “no stranger to derogatory remarks about Muslim women”.

Poised to answer a question, Hussain continued “let me ask the prime minister…” – before he was cut off by Sir Lindsay Hoyle.

“This is not the appropriate place to be raising that,” the Speaker said, before moving onto another MP.

Cut off by Hoyle

Hussain had started his question by raising concerns about Mark Spencer, the Tory minister who was recently appointed Commons leader despite being under investigation for alleged Islamophobia.

But when he turned to the prime minister’s own record he was cut off. Johnson has infamously described Muslim women as looking like “bank robbers” and “letterboxes”.

Spencer has faced claims – which he has denied – that he told MP Nusrat Ghani she lost her ministerial role because her Muslim faith made people feel uncomfortable.

In an interview with The Sunday Times last month, Ghani said she was told that her “Muslimness” had been raised at a Downing Street meeting.“It was like being punched in the stomach. I felt humiliated and powerless,” she said.

“When I challenged whether this was in any way acceptable and made clear there was little I could do about my identity, I had to listen to a monologue on how hard it was to define when people are being racist and that the party doesn’t have a problem and I needed to do more to defend it.

“It was very clear to me that the whips and No 10 were holding me to a higher threshold of loyalty than others because of my background and faith.”

Spencer subsequently identified himself as the whip in question, saying: “To ensure other whips are not drawn into this matter, I am identifying myself as the person Nusrat Ghani MP has made claims about this evening.

“These accusations are completely false and I consider them to be defamatory. I have never used those words attributed to me.

“It is disappointing that when this issue was raised before Ms Ghani declined to refer the matter to the Conservative Party for a formal investigation.”

He added: “These claims relate to a meeting in March 2020. When Ms Ghani raised them she was invited to use the formal CCHQ complaints procedure. She declined to do so.”

The Commons Leader has a key role of upholding standards in Parliament, a position for which Labour said Spencer is “completely inappropriate”.

Thangam Debbonaire, the shadow leader of the House, told the Guardian that Spencer “has been publicly accused of blackmail and threatening to withdraw investments… unless MPs toe the line.

“This is just the latest in a long line of appointments that demonstrates this Government’s complete disregard for standards in politics.”