Johnson will meet the Saudi Crown Prince in Riyadh days after the largest mass execution in the kingdom in modern history. 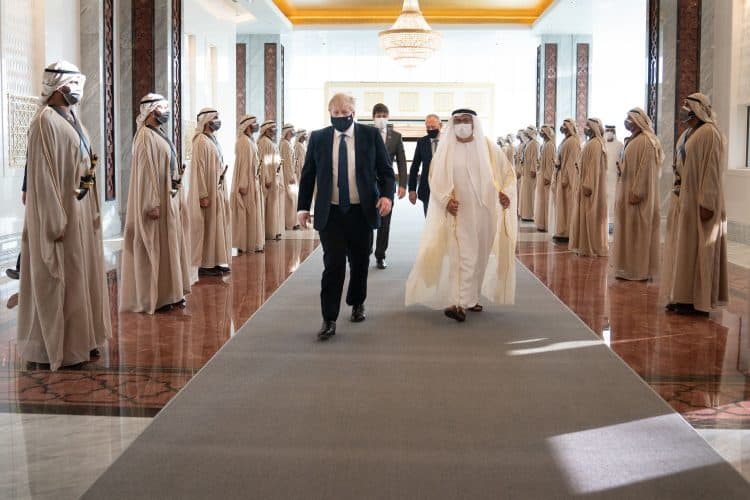 Boris Johnson has insisted that forging closer ties with Saudi Arabia does not mean “we can’t stick to our principles” after he was accused of going from “dictator to dictator” to find new fuel sources.

The Prime Minister is visiting the Gulf state and its neighbour the United Arab Emirates on Wednesday as he tries to wean the West off Russian energy in response to Vladimir Putin’s invasion of Ukraine.

But Mr Johnson downplayed his chances of managing to secure greater oil production from the Middle East in an attempt to lessen the severity of the cost of living crisis facing the UK.

He will meet Saudi Crown Prince Mohammed bin Salman in Riyadh days after the largest mass execution in the kingdom in modern history.

In his first stop in Abu Dhabi, Mr Johnson insisted he has raised the two countries’ poor human rights records “many, many times”, adding: “I’ll raise them all again today.”

He pointed towards Saudi Arabia announcing a £1 billion investment in green aviation fuel in Teesside.

“That’s the kind of thing we want to encourage – doesn’t in any way mean we can’t stick to our principles and raise those issues that we all care about,” he told broadcasters from under the rapidly warming sun on a terrace at the Emirates Palace hotel.

But he appeared pessimistic that he will be able to open up the spare capacity of the Saudi-led Organisation of the Petroleum Exporting Countries (Opec) to soften the blow of divesting from Russian fossil fuels.

“It’s not just a question of looking at the Opec countries and what they can do to increase supply, though that is important. There’s also the issue of Emirati investment in UK wind farms, already huge; what more can they do?” he said.

“When we look at the dependency the West in particular has built up on Putin’s hydrocarbons, on Putin’s oil and gas, we can see what a mistake that was because he’s been able to blackmail the West and hold western economies to ransom. We need independence.”

Mr Johnson pledged that his long-awaited energy strategy will come “next week” and include a “massive jump forward on renewables, more nuclear, using our own hydrocarbons more effectively” and sourcing fuel from outside Russia.

After his interview, Mr Johnson was going on to meet the UAE’s Crown Prince Sheikh Mohammed bin Zayed before heading to Riyadh.

Critics have particularly questioned the move to strengthen ties with Prince Mohammed bin Salman, with the Saudi leader implicated in the assassination of US-based journalist Jamal Khashoggi in 2018.

Labour leader Sir Keir Starmer said “going cap in hand from dictator to dictator is not an energy strategy”.

Conservative MPs and human rights watchdogs are among those calling on the Prime Minister to question the nations on their track records, with Saudi Arabia executing 81 people convicted of crimes ranging from killings to belonging to militant groups on Saturday.

Prince Mohammed bin Salman has largely been shunned by the West after US intelligence alleged he ordered the murder of Mr Khashoggi at the kingdom’s consulate in Istanbul, something the Saudi ruler denies.

One person who did embrace him, however, was the Russian president, with the prince and Mr Putin sharing a high-five and a laugh at a G20 summit in the month after Mr Khashoggi’s death.

Mr Johnson, who will be deputised at Prime Minister’s Questions on Wednesday by Justice Secretary Dominic Raab, has argued he needs to “build the widest possible coalition” to address Mr Putin’s attack on Ukraine.

The Prime Minister is expected to discuss the importance of allies increasing the diplomatic and economic pressure on the Kremlin while mitigating the global fallout from the war.

Conservative MP Julian Lewis, who chairs Parliament’s Intelligence and Security Committee, called on the Government to ensure that “in seeking to lessen our dependence upon one source of oil and gas, we do not end up creating a source dependency on another unreliable and sometimes hostile regime”.

Mr Johnson, who travelled overnight before starting the trip in the UAE on Wednesday morning, is being joined by investment minister Lord Grimstone.

Related: A letter from Gaza: Finding pride in hardship