The Speaker of the US House of Representatives discussed the Northern Ireland Protocol with Johnson in Downing Street. 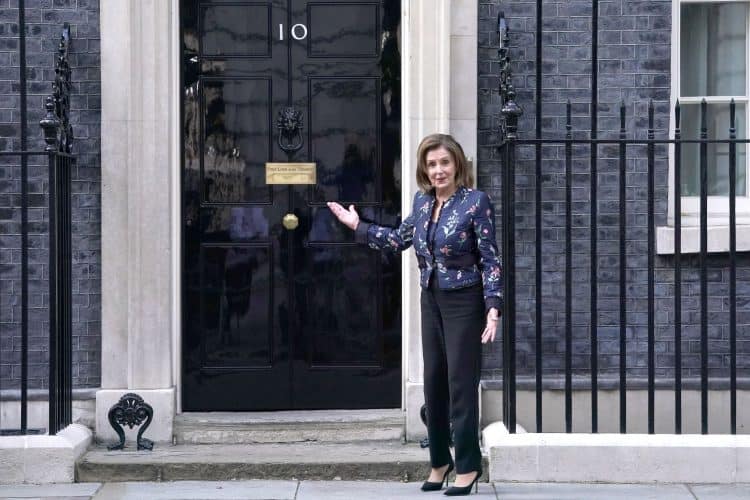 Nancy Pelosi has said a breakdown in the talks over the Northern Ireland Protocol would be “problematic” for a post-Brexit UK-US trade deal.

The Speaker of the US House of Representatives has been critical of Prime Minister Boris Johnson’s approach to Northern Ireland following Britain’s exit from the European Union.

The pair discussed the issue in Downing Street on Thursday and Pelosi expanded on her views about the talks currently under way between the UK and Brussels to resolve issues surrounding the implementation of the protocol.

The senior Democrat said she felt it would be “very unlikely” for London and Washington to agree the fresh trade terms coveted by the UK Government “if there is destruction of the Good Friday accords” as a result of the negotiations.

It is not the first time there has been intervention from senior Washington figures about Brexit’s impact on Ireland, with US President Joe Biden – who has Irish ancestry – and other Democrats, such as Pelosi, taking a keen interest in the situation in Northern Ireland.

At a time when the UK was considering overriding parts of the agreement in 2020, Pelosi made similar comments, warning that Congress would never pass a free trade agreement with the UK if the Government’s actions imperilled the peace process.

The UK wants to rewrite the protocol, which avoids a hard border with Ireland by effectively keeping Northern Ireland in the European Union’s single market for goods.

The post-Brexit rules have led to trade barriers for goods crossing the Irish Sea from Great Britain, even with grace periods in place to help goods such as chilled meats continue to be exchanged.

Pelosi told a Chatham House event in London she was “glad that more time” had been afforded for talks between the UK and the EU on how to operate the protocol.

But she said there “has to be an agreement” that respects the terms of the peace agreement in Northern Ireland or transatlantic relations and the prospect of a trade concord could suffer.

“If it takes a little more time, then so be it,” the senior US politician said.

“This is not said as any threat, it is a prediction: if there is destruction of the Good Friday accords, it would be very unlikely to have a UK-US bilateral.

“We have to have a path that includes it. It would be problematic in terms of a bilateral.”

Johnson to the White House

She revealed that Johnson had given her “reading material” about the issues Britain faces around the protocol when they met at No 10 this week.

And in the clearest indication yet that the Prime Minister will travel to Washington as part of his trip next week to the US for the United Nations general assembly, Pelosi said she “hopes to host” the Conservative Party leader at the House of Representatives, where she will raise any matters that arise from her reading.

Reports on both sides of the Atlantic have suggested Biden is set to welcome his UK ally to the White House as the pair look to work closely together on climate change and their approach to China.

It comes after the US, UK and Australia announced a new defence pact, known as Aukus, which is being seen as an attempt to keep China’s military expansion in the Indo-Pacific in check.