Several peers could be heard telling him “you can’t do that”, but others around the House raised their hands. 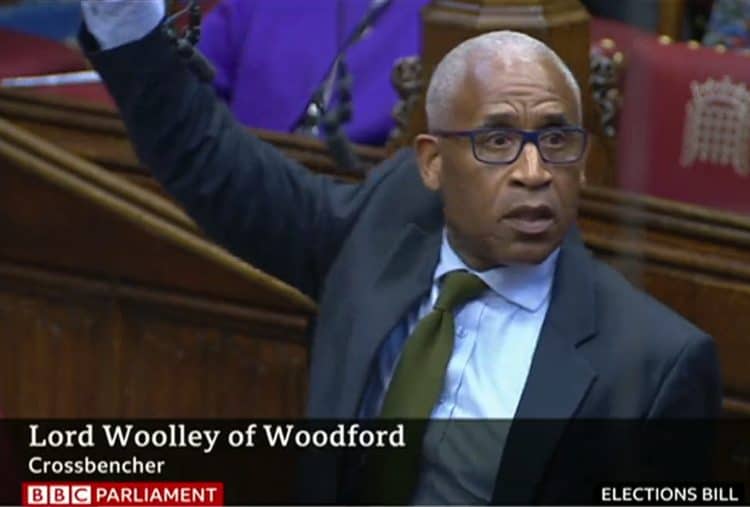 Peers faced calls to raise their hands if they had been stopped and searched by the police, as they debated plans for new voter ID to enter a polling station.

Independent crossbench peer Lord Woolley of Woodford asked peers to raise their hands as he questioned whether the new identification requirement in the Elections Bill would be “abused” by the authorities to “target” people from BAME backgrounds.

Lord Woolley, founder and director of the campaign group Operation Black Vote, told peers: “When people talk about identification cards, ID cards, let me ask you in this House straight, how many of you here, raise your hands, have been stopped and searched by the police?”

Several peers could be heard telling him “you can’t do that”, but others around the House raised their hands, including Lord Woolley himself.

Lord Woolley also raised his own hand after asking: “How many of you here have been stopped and stripped-searched?”

The peer then addressed laughter that could be heard in the chamber, saying: “I am sorry if you find this funny, my lord, this really isn’t funny. You ask Child Q if it is funny. Ask her.”

Lord Woolley also contested claims by Conservative former minister Baroness Verma, who said she had spent weeks talking to people from all backgrounds in Leicester, including black, Asian, minority ethnic and poor communities, and not one had objected to the plans for a voter ID card.

He said: “Because our worry, Baroness Verma, in the hands of the authority, that they will use identification cards to target us, because that is our lived experience, and so we worry. We worry will it be abused?

“Will we be harassed and humiliated?

“I know it is a digression but the subject came up and I wanted to knock it on its head.

“I am also from Leicester and I know the young Africans and Muslims there and they are worried about what we do here.”

He concluded: “That is why I am worried, that is why I have been worried about photo ID. I want to make it work. I want to bring people in, not lock people out.”

The peer had earlier claimed that a pilot of voter ID in Derby showed that “disproportionately black and brown people didn’t come back to exercise their franchise” once they had been turned away with insufficient identification.

He added: “If you calculate the number, the number was between 0.5% and 0.7% of those that came to the polls, turned away and never came back.

“If that translated to the general population we would be looking at hundreds of thousands, if not more than a million people, being turned away for exercising their franchise.

“Are we happy to accept that? Are we? Ask yourself that one question.”

Lord Woolley withdrew his amendment aimed at removing the requirement for voter ID from the Bill, but peers will continue their line-by-line scrutiny of the proposals.