“You can go to a game and if you throw a banana on a pitch, there'll be repercussions. Online, you can post a banana to a black player and you're not going to get punished. How is that right? Can't be," the former England footballer and TV pundit said. 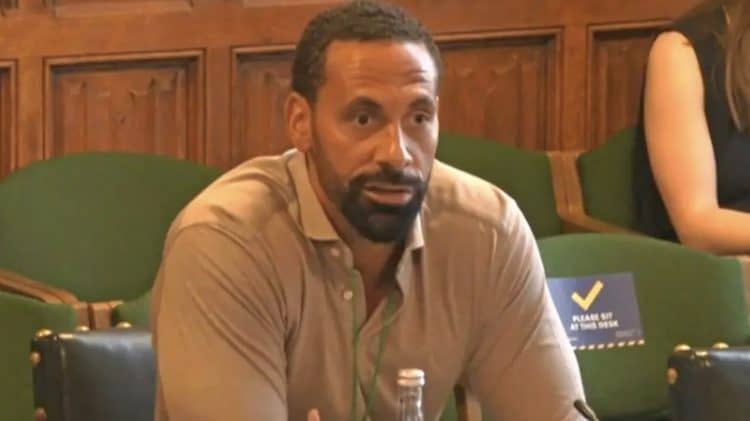 Former England footballer and TV pundit Rio Ferdinand has called on the government to stem the tide of racist abuse on social media, saying it will continue to happen in real life if it is allowed to go on unheeded.

Giving evidence at Parliament about online racist abuse in the aftermath of Euro 2020, Ferdinand said that when Marcus Rashford, Jadon Sancho and Bukayo Saka missed the penalties, his first thought was to check what was happening on social media.

He said: “I expected what happened to happen. And that is the disappointing thing.”

‘I’ve seen my family disintegrate when this happens’

“A black player is representing the country and doing great things. And they make no mistake, but they miss a penalty. And they have to sit there and go through abuse in the coming days via social media, it’s totally disheartening.”

Ferdinand said it is not just the players who “shouldn’t have to go through this”. He said racism affects their families and friends too, and added: “I’ve seen members of my family kind of disintegrate at times when situations like this happen.”

He called for punishments to be set out, coupled with education, whilst saying that being anonymous online is “an absolute problem for everybody in the society”.

He said: “The fact that you can be anonymous online, gives you a certain amount of power, enables you to puff your chest out and be able to really say what you really feel especially compounded with the fact that there’s no repercussions at the moment.

“You can go to a game and if you throw a banana on a pitch, there’ll be repercussions. Online, you can post a banana to a black player and you’re not going to get punished. How is that right? Can’t be.”

But although the abuse is often from people hiding behind the curtain, Ferdinand revealed people behind online racist abuse come from different backgrounds and walks of life – from young schoolboys to estate agents or bankers.

He said the negative discrimination and language on social media puts both self esteem and mental health at risk, and that some people are already at low when the abuse hits them further.

“I was racially abused again recently, so I know from personal experience that it’s becoming more normal,” he added.

But he said that social media platforms insist it is down to the victim to report abusive content or put blocks in place so that they do not see it – which he thinks does not stop the problem.

He added: “I have to sit there and have breakfast with my kids and explain to them what the monkey emoji means, in that context, what the banana means, and why there is a banana under my posts.

“I’m having to do that in today’s day and age when there’s AI and resources available for these companies to be able to deal with these situations, so that I as a parent don’t have to go down this road and explain that.”

“It’s just a knock-on effect from ‘it’s okay online, so it must be okay in the stadiums’. Until you stop those situations online, it’s going to keep being reflected in the stadiums,” he concluded.

Imran Ahmed, CEO and Founder at the Center for Countering Digital Hate, who have been researching sources of disinformation and hate speech on social media platforms, said big tech firms “put profit before people” when given the chance to change the way the operate.

He said the Online Safety Bill is Parliament’s chance to encourage social media firms to protect users and to hold them accountable.

Ahmed explained that when social media users see a type of content frequently, they think it’s “normal” and “true” – and that trust in social media is the key driver in vaccine hesitancy.

And he warned it’s not a case that social media platforms are “all about freedom of speech”.

“Their algorithms mean that they pick winners and losers in the content game,” he explained.

He added: “The prevalence of hate speech and misinformation damages free speech in other ways. You haven’t got free speech if you’re a black footballer and 100 racist people jump down your throat every time you post. In fact, the barrier to entry for you to using this vital tool for promoting your brand for transacting business is taken away from you.”

And he said that conspiracist information is addictive and keeps people on the platform, and the incentive to allow this information to spread is rooted in the fact that “eyeballs equal ad revenues”.

He added: “Smart people are just as vulnerable to conspiracy theories for a variety of reasons, not least of all, because they’re more confident that they know what the truth is, once they’ve worked out what they think the truth is that they’re using the evidence in front of them.”