The First Minister said Scotland will stick to a “careful, evidence-based path” out of lockdown. 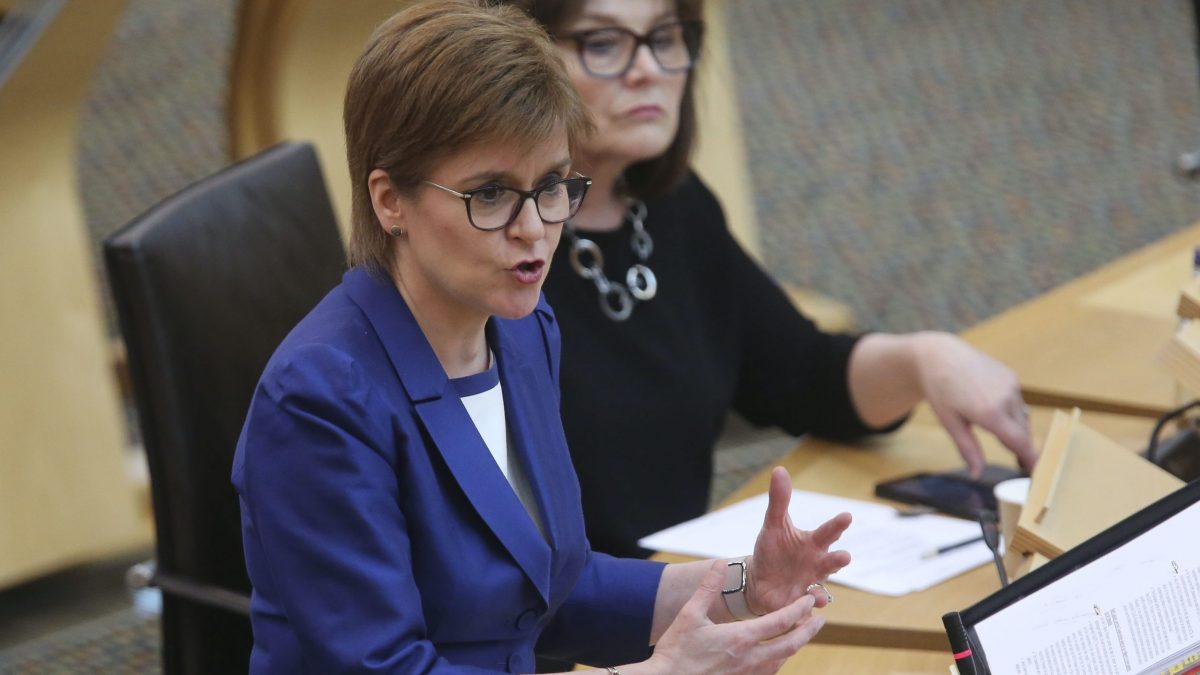 Scotland’s First Minister has insisted she will not be drawn into a “reckless race” with other parts of the UK on lifting coronavirus restrictions.

The First Minister acknowledged Scotland’s pace in coming out of lockdown is “slightly slower than England’s” but said she hopes it is “more likely to be sustainable than if we went faster”.

She has been criticised by the Scottish Conservatives for maintaining the two-metre social distancing rule, which is being relaxed in England from July 4.

“What is gut-wrenching is the thought of losing that, and customers leaving Scotland and going to other countries. England and Ireland are ahead of us.” #FMQs

While Ms Sturgeon announced a series of dates when restrictions in Scotland will be eased – if progress in tackling Covid-19 is maintained – Scottish Tory leader Jackson Carlaw pressed her to bring forward the date of a review of the two-metre rule.

Without this being lifted, many pubs, hotels and restaurants will not be able to cope, Mr Carlaw claimed.

He told the First Minister: “Every day literally counts for Scottish tourism.”

Mr Carlaw said as thing stand, when the five-mile limit on travel is eased in Scotland for leisure trips on July 3, “Scots can travel to holiday in England but not in Scotland”.

With most of Scotland’s hospitality and tourism sector not due to open up again until July 15, Mr Carlaw said the chief executive of the Crieff Hydro hotel Stephen Leckie had said it will be “gut-wrenching” to lose customers to other parts of the UK.

NS: "In addition, before the end of July we will provide further advice to those who are shielding. We want, if we can, to move away from the current position of blanket advice for all shielding people to much more tailored advice about risk and how to mitigate it."

Responding to his calls for advice on a possible easing of the two-metre rule to be brought forward, the First Minister said: “If I was to put pressure on an independent advisory group to give me advice earlier than they were ready to do so Jackson Carlaw would be the first one getting to his feet criticising me for that.”

She said while she had tried “not to criticise other leaders taking very, very difficult decisions” she still has “not seen the evidence” for the easing of the rule in England.

Ms Sturgeon said Scotland will stick to a “careful, evidence-based path” out of lockdown.

Speaking at First Minister’s Questions she said: “Every step we take that potentially risks this virus running out of control again doesn’t just put livelihoods at risk, it puts lives at risk.

“And I am not prepared to do that in some kind of reckless race with other parts of the UK.

“I am determined to get this right and to balance the various harms we know are being done to our country and our economy in a way that build as quick as recovery as possible but – fundamentally, even more importantly – that builds a sustainable recovery.”

Ms Sturgeon added: “I want to act as quickly as I possibly can but I want to make sure that is on the basis of evidence.”

She later said: “Let me say quite candidly and quite directly and quite bluntly – if we have a second spike, or wave, or outbreaks of this virus, then hotels, restaurants, cafes, whole swathes of the economy will be forced to close again and all us will remain in lockdown longer than I believe is necessary.

“That is how we have proceeded thus far. I believe that is why we now have this virus closer to the point of elimination in Scotland and indeed why we see infection rates and thankfully now the number of people dying lower than in some parts of the UK.

“That says to me we stick to our careful, evidence-based path.”

The First Minister today updated the Routemap with indicative dates for the remainder of Phase 2 and the early part of Phase 3. Here's the one page summary: pic.twitter.com/B57FheKExh

Her comments came after she announced pubs, hairdressers and cinemas will be able to open from July 15 if coronavirus continues to decline in Scotland.

The updated route map out of lockdown also allows for outdoor hospitality areas such as beer gardens to be able to open from July 6.

To applause from MSPs in the chamber, she said barbers and hairdressers will also be able to open from July 15.

But she stressed if the Covid-19 virus begins to take hold again such moves “will be halted”.

The First Minister warned Scots: “If at any stage there appears to be a risk of its resurgence, our path out of lockdown will be halted and we may even have to go backwards.

“To avoid that, we must get as close as possible to elimination of the virus now.”