The government’s socialist measures might be a temporary economic prop, but they can't ignore the wealth building movement for much longer.

by Guest Contributor
in Business and Economics, Economics 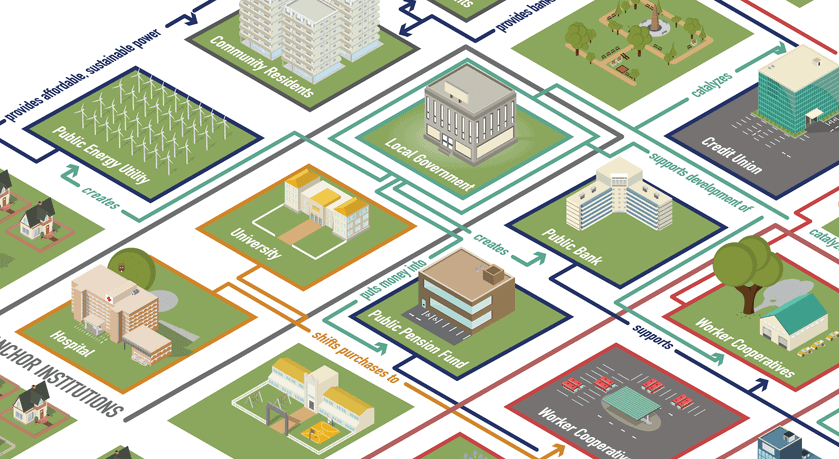 It’s over two years since the ‘Preston Model’ became the darling of alternative economics. When progressive Guardian commentator Aditya Chakrabortty championed the small Lancashire city’s anti-globalist approach to economic recovery in January 2018, local government’s relationship with the Community Wealth Building movement was given a violent shove from flirting to semi-serious. The number of councils at least batting their eyelids at wealth building is approaching three figures, not to mention devolved government bodies like the Welsh Assembly.

Despite the Preston Model being conceived by two Councillors and two economists in a local pub six years earlier, its fame was premature; it was the preparatory work for creating worker co-operative businesses that became celebrated, rather than the long term aims. The research undertaken, of where local ‘Anchor Institutions’ like councils, the university, colleges, housing associations etc. were spending their money, helped re-direct over £200million into the local economy in just two years. Preston’s procurement strategy also became an EU project in itself, developing and sharing good practice on public sector spending across the continent.

Preston is now actually pushing on with creating more worker owned businesses in the city after receiving funding from Soros’ Open Society vehicle. This was always the main strand of the model following inspiration from the Evergreen Co-operatives in Cleveland (Ohio) and the Mondragon Corporation co-operatives umbrella in Spain;  Mondragon being the best example of a ‘whole place’ co-operative strategy with a bank, a university, welfare and social support systems alongside the 100 worker owned businesses.

Covid19 also required a co-ordinated, co-operative response. The UK state financial package was unprecedented; welfare on a massive scale, seized upon by progressives to push ideas like Universal Basic Income and a living wage for key workers. Councils have been at the heart of the support for those shielding from the virus, disseminating information, food and other support services.

Unfortunately, the government’s uncharacteristically socialist measures appear a very temporary economic prop and the biblical efforts of local authorities and the third sector of feeding and supporting the vulnerable displays little evidence of sustainability. The national Covid19 operation was about making sure everyone had the basics while isolating – the homeless were housed and the hungry were fed. Footballer Marcus Rashford even managed to force a u-turn on feeding hungry children over the summer.

The foundation of the food drive however has been donations and supermarket surplus. Any system that produces so much surplus is not sustainable, either environmentally or financially. The huge growth in food banks will create a dependency culture which will collapse when the profiteers need to reduce costs – and even if it could be sustained, is this the world we want to live in? Feeding the poor with crumbs from the top table?

It’s an ill wind that blows no good and Covid19 has given new economics the platform it requires to make the case for whole place wealth building. It was already happening to an extent with several regional community banks being formed to support the sectors neglected by the high street financiers and councils like North Ayrshire producing encompassing wealth building strategies with the Centre for Local Economic Strategies.

The Tories have barely acknowledged the new economy, apart from a brief mention of Anchor Institutions in the NHS Plan. Yet this government have displayed the capacity for u-turns and have enacted the shameless annexation of elements of Labour’s defeated manifesto policies. As the wealth building movement snowballs, they will be unable to ignore it for much longer.