James Felton tweeted: "Starting to think they just like to pretend they’re oppressed." 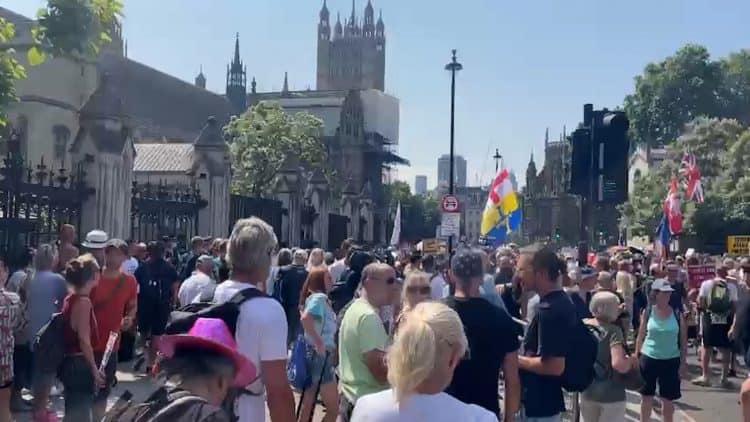 Police are responding to an anti-lockdown protest in Westminster which saw demonstrators block a road and force traffic to a standstill on so-called ‘freedom day’.

Protesters held signs and chanted “freedom” as they gathered in Parliament Square on Monday after all remaining coronavirus restrictions were lifted in England, including an end to social distancing rules.

The demonstration moved from Parliament Square to spread onto the road and up to the gates of the Palace of Westminster, leading Metropolitan Police officers to urge protesters to move out of the road.

An officer was seen to put a lock on a gate at the entrance to Parliament while those outside held signs with anti-vaccination and anti-police messages, with some chanting “shame on police” and “arrest Boris Johnson”.

The Metropolitan Police tweeted: “We are responding to a demonstration in Parliament Square this afternoon.

“A group have blocked the road which is causing traffic disruption.

“Officers are on scene, speaking with those taking part in the protest and looking to ease congestion as soon as possible.”

Social media was abuzz with footage from the march, with Oli Dugmore, head of news and politics at Joe Media, tweeting that QAnon was in attendance.