The Conservative Party Conference was still packing up when the knives were out for Theresa May. With Theresa May hanging onto power by her fingernails the plot to oust the PM is being “masterminded” by Grant Shapps. “A growing number of number of my colleagues, we realise that the solution isn’t to bury our heads […] 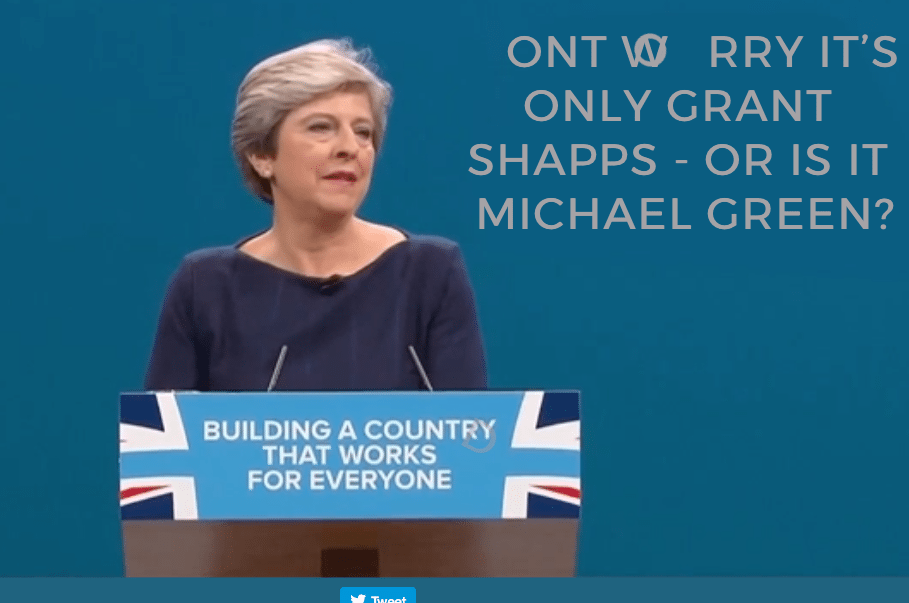 The Conservative Party Conference was still packing up when the knives were out for Theresa May.

With Theresa May hanging onto power by her fingernails the plot to oust the PM is being “masterminded” by Grant Shapps.

“A growing number of number of my colleagues, we realise that the solution isn’t to bury our heads in the sand and just hope things will get better, the MP for Welwyn Hatfield told Radio 4’s Today programme this morning.

Shapps told Radio 5 Live that he is one of five former Cabinet ministers among 30 Tory MPs “perfectly within their rights” to ask May to quit for losing their majority in the snap election.

“We don’t want to write a formal letter, we don’t want to do make it difficult and embarrassing for Theresa. When the time is right we’ll give the list to Theresa,” Schapps told Sky News, insisting that the “list” is “pretty much my initiative.”

The former minister added: ”if something isn’t working, you have to do something about it. We are very unhappy about the situation.”

So why is Grant Shapps the MP sticking his head above the parapet to call for May’s resignation?

Well perhaps he has no career to ruin. As Tory colleague Michael Fabricant said – he would not “buy a used car” from Grant Shapps.

In 2008, Shapps was revealed to be one of several Tory shadow ministers receiving cash from firms linked to their portfolios. The donors were originally recruited by Michael Gove.

People are joking that they want to see Shapps’ list as at least three of the names on it should be him. In 2012, the year he became co-Chairman of the Conservative Party a scandal erupted when it was revealed that he was using the names Michael Green and Sebastian Fox for his business interests, and using his access to parliament under one of his alter egos. The scandal emerged when he was photographed wearing a badge saying “Michael Green.” Green – or is it Schapps continued to use a false identity while an MP. He is even alleged to have shown business contacts around the House of Commons, as his alter ego. Michael Green had founded an internet marketing scheme called HowToCorp selling all kinds of guides to “get rich quick” – a business Green – I mean Schapps – insisted wasn’t in his name any more as an MP.

Sebastian Fox – I mean Shapps was accused of patronising and totally out of touch with working-class people after the 2014 budget, when he tweeted: “Bingo. Cutting the Bingo tax and beer duty: To help hardworking people do more of the things they enjoy.”

Sebastian Fox – I mean Michael Green – I mean Shapps denied having used a pseudonym after entering parliament and, in 2014, threatened legal action against a constituent who’d said he had on Facebook.

In February 2015 he told LBC presenter Shelagh Fogarty: “Let me get this absolutely clear…I don’t have a second job and have never had a second job while being an MP. End of story.”

In March Shapps admitted having had a second job while an MP and conducting business under a pseudonym. That month the constituent he had been threatening to sue, threatened to sue Shapps.

In 2012 Shapps admitted editing his Wikipedia page to make it more accurate, after it was revealed that someone from his office had been editing his page to get rid of embarrassing details.

During the 2015 general election a Wikipedia admin claimed that Shapps had used a sockpuppet account to remove embarrassing material from his English Wikipedia page as well as make “largely unflattering” edits to articles about other politicians, including some within his own party.

Having been sacked from the cabinet, Green – I mean Shapps was appointed as minister of state at the Department for International Development in May 2015. But in November that year he quit as minister after it emerged that as party co-chairman, Shapps had ignored repeated allegations of bullying, involving Mark Clarke, Tory youth organiser. The alleged bullying was linked to the suicide of a young activist.

Perhaps many of the reasons that Shapps has never got on with Theresa May, and is now accused of leading both Brexiteer and a Remainer plots against her.

Some Tory MPs are accusing the former remained who know insists he is fully behind Brexit of being part of a plot too install a pro-Remain Tory leader and disrupt Brexit.

Others think Green – I mean Shapps just has sour grapes after being sacked from his job twice, as do other MPs who have lost their jobs and fallen out of favour.