She accused the opposition of trying to prevent her from "stopping the invasion" and "scourge" of immigration into this country. 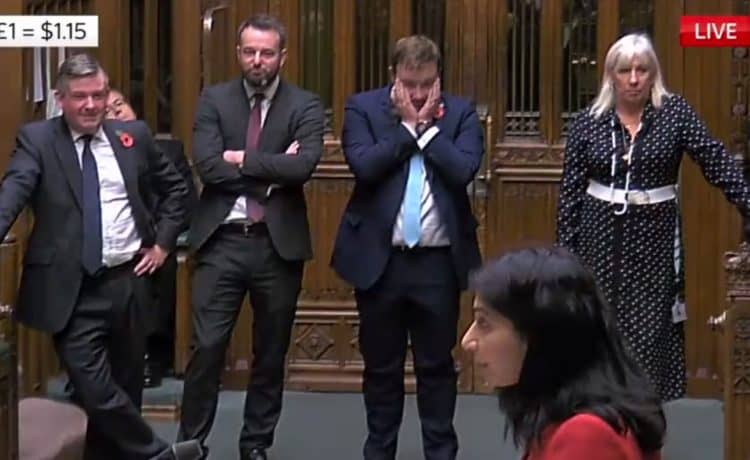 Under-pressure Home Secretary Suella Braverman has vowed to fix the UK’s “broken” asylum system as she rejected calls to resign over her response to the migrant crisis.

In a combative Commons performance on Monday, Ms Braverman denied ignoring legal advice to procure more accommodation amid warnings a temporary holding centre at Manston in Kent was dangerously overcrowded.

With the Government spending £6.8 million a day putting up migrants in hotels – at an average cost of £150 per person per night – she insisted she was right to order a review of the way the system was working.

But she faced criticism from some opposition MPs for inflaming the situation after she said the Government is committed to “stopping the invasion on our southern coast”.

Labour questioned how – with Ms Braverman facing multiple accusations of breaching the Ministerial Code – the public could have confidence in her ability to discharge her responsibilities for national security.

Earlier, in a lengthy letter to MPs, the Home Secretary apologised for a series of “errors of judgment” in which she used her personal email to send official government documents.

The disclosure led to her resignation from former prime minister Liz Truss’s government, only for new Prime Minister Rishi Sunak to reappoint her six days later as part of what Labour claimed was a “grubby deal” to secure her support in the Tory leadership race.

While Ms Braverman insisted there was no risk to national security, she was forced to admit she had sent official documents to her personal email address on six separate occasions.

On the day of her resignation, she waited several hours before alerting officials to the fact she inadvertently sent a document to a member of staff working for a Conservative MP, she also admitted.

In the Commons, shadow home secretary Yvette Cooper said Ms Braverman may have committed as many as three breaches of the Ministerial Code in a day.

The Home Secretary, however, strongly denied claims she ignored legal advice and rejected calls by officials to procure more hotel accommodation for migrants amid mounting concern about the situation at Manston.

She said she will be visiting the facility “shortly” and will continue to “personally” oversee efforts to resolve the problems there.

Last week, the chief inspector of borders and immigration David Neal told MPs the conditions he found at the centre left him “speechless”.

Reacting to her speech in parliament, a few MPs looked similarly dumbstruck.