We didn't see that on the side of a bus back in 2016. A prominent pro-Brexit campaigner now says leaving the EU 'is part of the long game'. 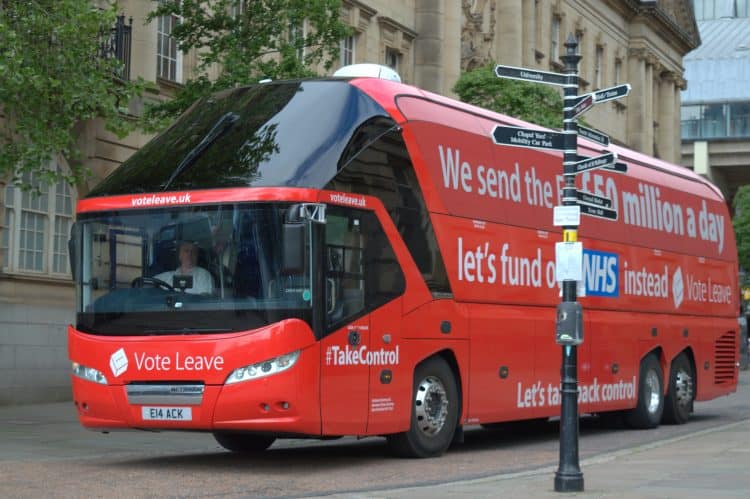 We seriously doubt voters would have been so enthusiastic to back the Leave campaign had this been one of their taglines. Alas, even some of the most fervent defenders of Brexit are now trying to change the goalposts.

Andrew Lilico, a senior economist and former Tory councillor, suggested on Sunday that we’d only really be able to tell if Brexit was a success ‘over the next 40 years’. Those hoping for sunlit uplands will now, apparently, have to wait decades to see them…

“So far all that’s happened is that we’ve succeeded in Brexiting. Whether we make a success of being outside the EU is a matter of what we do over the next 40 years. It isn’t the kind of thing that is a success or failure over a two or three year timescale.” | Andrew Lilico

When will we benefit from Brexit? Well, 40 years is better than 50…

The Tweet has generated a tumultuous response online. Many have scoffed at the suggestion that the benefits of Brexit will be worth a two-generation wait. However, Lilico’s prediction is actually an improvement on one made by Jacob Rees-Mogg a few years back.

“Maybe things are getting better. Jacob Rees-Mogg previously advised us all to wait 50 years before we could start judging Brexit. We’ve not got Andrew Lilico suggesting it will only take 40 years.” | Alistair McQueen

Will UK voters seek to rejoin the EU?

Mark English, of the European Movement UK, says that Brexit will chart a very different course between now and the 2060s. He predicts that the damage of leaving the EU will only worsen, feeding the appetite for a ‘rejoin’ campaign.

“Many economists think Brexit will have slow drip effect, undermining UK competitiveness and getting worse over time. In the next 40 years, the UK will try to mitigate damage Brexit zealots have caused, This could mean we ultimately rejoin the EU at some point.” | Mark English