A group wearing life jackets was brought to Dover, just a day after a dinghy capsized off Calais, killing dozens. 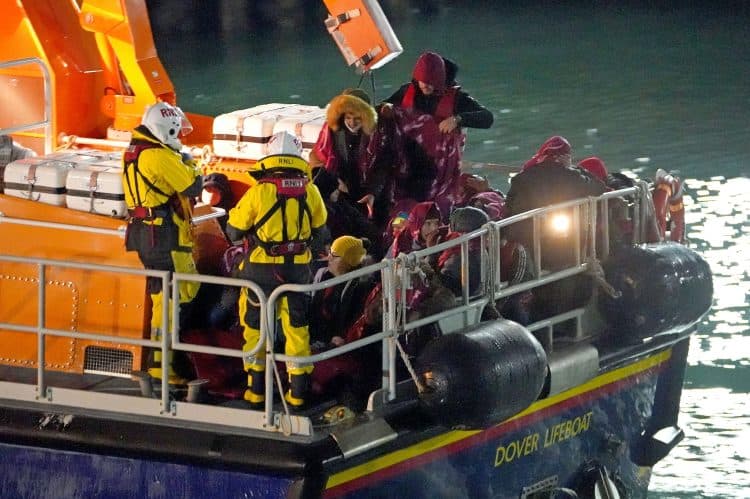 More people making the perilous journey across the Channel have been brought ashore in the UK following the deadliest day of the current migrant crisis.

A group wearing life jackets and wrapped in blankets were seen huddled together on board an RNLI lifeboat before disembarking in Dover on Thursday morning, just a day after a dinghy capsized off the coast of Calais, causing the loss of dozens of lives.

Ahead of talks with Home Secretary Priti Patel, French interior minister Gerald Darmanin said the loss of 27 lives was an “absolute tragedy” as he blamed human trafficking gangs who promised people the “El Dorado of England” for a large fee.

Boris Johnson called on France to agree to joint police patrols along the French Channel coast, while French politicians pointed the finger at UK authorities for failing to tackle the issue.

Pierre-Henri Dumont, the MP for Calais, rejected the Prime Minister’s proposal as a “crazy solution” that “will not change anything” along the vast shoreline.

‘All options on the table’

Johnson spoke to President Emmanuel Macron on Wednesday evening in the wake of the tragedy, with French officials saying pregnant women and children were among the dead.

Downing Street said the two men had agreed to “keep all options on the table” in their efforts to break up the human trafficking gangs responsible for putting desperate people at risk in one of the world’s busiest sea lanes.

Darmanin told French radio network RTL the smugglers are “criminals, people who exploit the misery of others, of women and children – there were pregnant women, children who died yesterday on that boat… and for a few thousand euros they promise them ‘El Dorado in England’.

“And, sadly, this has been repeated every day for the last 20 years.”

A joint search and rescue operation by the French and British authorities that was launched after a fishing boat spotted people in the sea off France was finally called off late on Wednesday.

The dead were said to include five women and a girl, while two survivors were picked up and were being treated in a French hospital. One of the dead women was later reported to have been pregnant.

Darmanin said the boat which sank had been very flimsy, likening it to “a pool you blow up in your garden”.

He was unable to state the nationalities of the victims, but said the two survivors were Somali and Iraqi and had been treated for severe hypothermia.

The French authorities have arrested five suspected people traffickers in connection with the incident, while the regional prosecutor has opened an investigation into aggravated manslaughter.

Following a meeting of the Cobra emergencies committee, Johnson said it is clear that French operations to stop the migrant boats leaving “haven’t been enough” despite £54 million of UK support, adding that the people traffickers are “literally getting away with murder”.

However, Mayor of Calais Natacha Bouchart said it is the British who are to blame and called on Johnson to “face up to his responsibilities”.

“The British government is to blame. I believe that Boris Johnson has, for the past year and a half, cynically chosen to blame France,” she said, according to French media reports.

Franck Dhersin, vice president of transport for the northern Hauts-de-France region, said the “mafia chiefs” at the top of the trafficking networks live in the UK and must be arrested.

“And the mafia chiefs live in London… They live in London peacefully, in beautiful villas, they earn hundreds of millions of euros every year, and they reinvest that money in the City,” he told French TV station BFMTV.

But Enver Solomon, chief executive of the Refugee Council, said the “tragedy of this magnitude” should be the “wake-up call” needed for the government to rethink its approach.

A number of people are also believed to have reached Britain in small boats on Wednesday, with an Afghan soldier who had worked with British forces reported to be among those landing at Dungeness in Kent.

‘Stop blaming each other’

The Dover Strait is the busiest shipping lane in the world and has claimed many lives of people trying to cross to Britain in inflatable dinghies.

More than 25,700 people have made the dangerous journey to the UK in small boats this year – three times the total for the whole of 2020, according to data compiled by the PA news agency.

Immigration minister Kevin Foster said Britain had supplied a helicopter during Wednesday’s search for survivors and insisted the UK is “happy to look at doing more” to support French efforts to prevent crossings of the Channel.

“We have offered resources, we are happy to support their operations on the beach,” he told BBC Breakfast, adding that ministers are “determined to smash this really evil business model” of people trafficking.

But Calais MP Dumont told the same programme that more patrols “will not change anything because we have 200-300km of shore to monitor 24/7”.

“I think it’s time for both our governments to stop blaming each other and to try and talk to each other and find real solutions, not a crazy solution such as having more and more people patrolling, sending the British Army to the French shore,” he said.

“That is not acceptable and will not change anything.”