EXCLUSIVE: Alexandra Bulat, Lara Parizotto and Marcela Benedetti, who set up Migrants for Labour in a bid to shake up the party’s diversity, have all been selected by Labour to undergo candidate training for Westminster in the 2024 parliamentary elections. 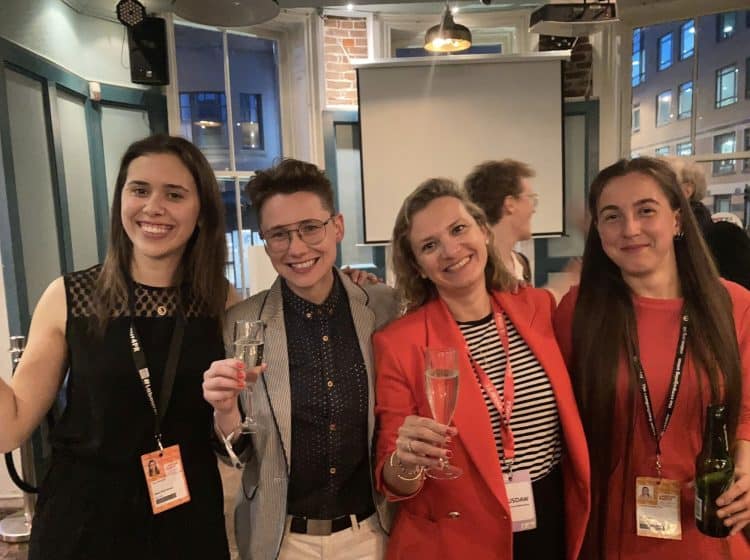 Young, female, first-generation EU migrants are on track to make history in the UK as they are one step closer to appearing on the ballot paper in the next general election.

Alexandra Bulat, Lara Parizotto and Marcela Benedetti, who set up Migrants for Labour in a bid to shake up the party’s diversity, have all been selected by Labour to undergo candidate training for Westminster in the 2024 parliamentary elections.

They started campaigning for EU migrants since the Brexit vote threatened their rights in the UK without being allowed a say in the country they have been calling home – and now have the chance to become MPs and fill a gap in EU migrants’ lack of representation across British politics.

Bulat, currently a Labour County Councillor – the first in the UK of Romanian background – is representing a Cambridge ward and would like to stay in the eastern region of England and represent the “diversity of communities”.

“We have more than 800,000 applications from Romanians under the EU Settlement Scheme, and can we name any person of Romanian background in Parliament? No,” she told The London Economic.

She added: “There are barely a few local councillors, the representation is just not there for the Romanian community in terms of UK politics, local or national.

“I think it would be nice to be represented by someone who comes from this diverse background.”

The 27-year-old thinks having people of migrant background in politics could also help shape a more positive narrative about immigration, especially when it comes to Eastern Europeans, who have been consistently portrayed negatively by the UK media over the years.

“It [being an MP] does kind of like send the message that migrants are part of every level of society,” Bulat said.

“It’s a very important message to not have this feeling or idea anymore, that migrants are just for themselves, they just live in a separate community and don’t want to integrate, and so on. Having migrants in politics actually shows that it’s not true. Migrants are our communities, they’re part of our communities. We all face similar issues, whether it’s housing, education, environment, and we need to work together.”

Bulat thinks that having people with lived experiences of being a migrant, a young person and a woman represented is more important than having someone speaking about issues these demographics face, because they relate more to issues that concern them.

At the 2019 general election, 34 per cent of all MPs were women, the highest ever number and proportion of women elected in the UK Parliament.

The average age of MPs since 1979 has remained around 50, with 49 per cent of all MPs being over the age of 50 as of the last election. By contrast, only three per cent of elected members were aged 18 to 29.

Bulat thinks young people’s representation is needed because they are “worse off” than their parents’ generation – but she thinks the way politics is structured makes it often inaccessible for them, and that it is “often really difficult as the youngest person in the room to speak up”.

MP with a Latin American background

Parizotto, who lives in London and identifies as a Londoner, is hopeful she would be able to represent the city’s diverse demographic – but is also interested in young and migrant communities who experience issues she faced in the UK – such as renting, housing and the gig economy.

As a Brazilian with Italian citizenship, Parizotto struggles to think of an MP with a Latin American background, despite a community of more than around 250,000 Latin Americans in the UK, of which over half live in London.

She added: “Representation is not the silver bullet that solves all the problems, but it does help somewhat.

“If you’re not there at the table where the decisions are being made, often the issue that affects you personally or that you’re capable of talking about will not be addressed.”

The 25-year-old thinks that had there been MPs from EU backgrounds in Parliament during the Brexit negotiations, EU migrants would have had fewer problems generated by the EU Settlement Scheme put in place by the UK government.

Parizotto said: “There were lots of MPs who spoke about it. But you still had to do the effort of convincing them to talk about it and explaining it to them.

“If you already have someone that has lived it and understands it, the arguments are are different and often more persuasive.”

Benedetti, who is half white Italian due to her father and has indigenous Latin American blood from her mother, says politics is in her DNA.

Born in Argentina, the 46-year-old said her father was arrested by the then dictatorial government and imprisoned for a long time.

After he was released, she campaigned as a child for him to become a council leader and, at school, she was elected as president of the student union.

Although she was involved in politics for as long as she can remember, when she moved to the UK aged 30 and went to a hustings for local council candidates, a Tory council candidate told her first generation migrants “did not have the right to participate in politics”.

“I thought that was true,” she said. “I decided to focus on my work in the charity sector, supporting families, women and girls, fleeing domestic abuse, thinking politics was not for me. And then in that journey, I met a councillor from the Labour Party who had an even heavier accent than mine, and he said to me, no, politics is for everybody.”

But she thinks prejudice goes beyond accent when it comes to the hardships migrants experience in the British society – and that being a migrant woman is particularly  “more difficult in any profession”.

She said: “We arrive in the country and we don’t understand the system, we don’t have family, and normally we don’t have anyone to kind of guide us.

“We created Migrants for Labour to offer a platform of support and network, all of the things we don’t have as migrants, because we don’t have connections or family.

“You feel that you have to work harder than the rest, to demonstrate that you can do it, and to keep quiet and be grateful for having the opportunity to be in the UK.”

Benedetti, who thinks migrants should also be allowed to vote in all elections without having to acquire the expensive British citizenship, was further disappointed when she discovered EU migrants could not have a say about their future in the 2016.

As well as supporting voting rights for all UK residents, Benedetti is hopeful the UK’s next election will have a properly diverse Parliament. “Parliament should be a space of representation to everyone,” she concludes.