The PM couldn't resist taking a swipe at the "greenshirts" as the government announced grants of £5,000 to replace gas boilers with low carbon heat pumps. 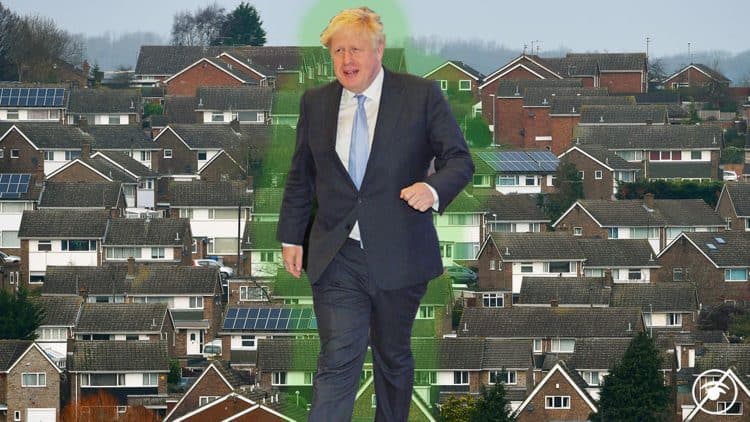 Boris Johnson has assured homeowners that the “greenshirts of the boiler police” won’t kick down doors to rip out dirty gas boilers as he set out plans to make the nation’s buildings greener.

The government announced today that grants of £5,000 will be available to households to replace their gas boiler with a low carbon heat pump as part of efforts to cut emissions from homes.

Johnson set out the plans as he confirmed a target for all new heating system installations to be low carbon by 2035, but insisted families are not going to be forced to remove their existing fossil fuel boilers.

In an op-ed penned for The Sun, he said: “While we’re going to have to make some pretty major changes to the way we heat our homes, the Greenshirts of the Boiler Police are not going to kick in your door with their sandal-clad feet and seize, at carrot-point, your trusty old combi” – much to the bemusement of people on social media.

Jan Rosenow, Europe director at the Regulatory Assistance Project – which aims to accelerate the shift to clean, reliable and efficient energy, said there were many positive elements to the strategy, but questioned the extent of the roll-out.

He said: “The UK would be the first country in the world banning the installation of new fossil heating systems which will set an example to others. This is an important signal in the run-up to Cop26 in Glasgow.

“Providing grants for installing heat pumps is essential as they are more expensive than gas boilers, but the level of funding is too low.”

He said the funding would only allow 30,000 homes to benefit from the grant – just enough to support current installation levels – and not enough to meet the Government’s target to install 600,000 heat pumps a year by 2028.

Environmental campaigners at Greenpeace and Friends of the Earth also criticised the level of funding for heat pumps and energy efficiency measures in homes.

Ed Miliband, shadow business secretary, said: “As millions of families face an energy and cost-of-living crisis, this is a meagre, unambitious and wholly inadequate response.

“Families up and down the country desperately needed Labour’s 10-year plan investing £6 billion a year for home insulation and zero carbon heating to cut bills by £400 per year, improve our energy security, create jobs and reduce carbon emissions.”

But Greg Jackson, chief executive and founder of Octopus Energy, said that when the grant scheme launches, the company will install heat pumps at about the same cost as gas boilers and had begun training 1,000 engineers a year.

He said it would help kickstart a cheap, clean heating revolution, and scaling up the technology and supply chain in Britain would mean companies such as Octopus would soon be able to install heat pumps without Government support.

“Today we’ve crossed a massive milestone in our fight against climate change and to reduce Britain’s reliance on expensive, dirty gas,” he said.