Policy experts have suggested that the bloc establish a Partnership for Enlargement that offers Ukraine, Moldova, Georgia, and Western Balkan states concrete steps towards deeper integration. 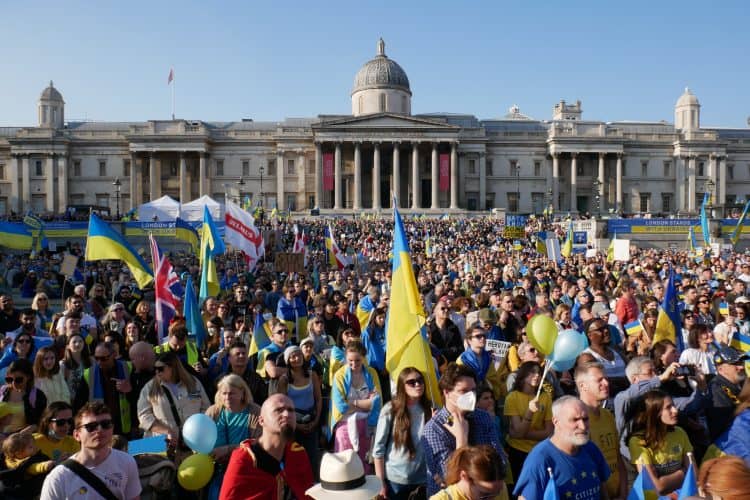 With EU leaders due to announce later this week whether they will grant Ukraine EU candidate status, new analysis from the European Council on Foreign Relations (ECFR) found the move would be a popular choice with most people.

Across the ten countries polled, 57 per cent said they are in favour of Ukraine joining the EU, while 19 per cent opposed such a move.

Poland, which has taken centre-stage in the crisis, is most in favour of Ukraine becoming an EU member.

Seventy per cent of the country’s respondents supported Ukraine’s EU accession, followed by 69 per cent in Portugal and Finland, and 66 per cent in Sweden.

A majority in Spain (58 per cent) is also in favour.

Germany and Italy displayed the most opposition to Ukraine’s EU membership bid.

Almost one-third (32 per cent) of those polled in Germany, and just over a quarter of French (26 per cent) and Italian (28 per cent) respondents oppose Ukraine’s EU accession.

However, the prevailing view in these three countries was still in support of Kyiv joining the bloc (48 per cent, 47 per cent and 46 per cent, respectively).

Piotr Buras, head of the ECFR’s Warsaw office, said: “Russia’s war on Ukraine puts the entire future European order at risk. It is already forcing a profound reconsideration of the EU’s and its neighbours’ interests.

“To address this, the EU needs to devise a new approach to its neighbourhood, similar to the way in which it has rapidly enhanced its security and economic policies to respond to the threat. This would be a strong signal.

“The EU should establish a Partnership for Enlargement that offers Ukraine, Moldova, Georgia, and Western Balkan states concrete steps towards deeper integration – and a pathway to eventual membership.

“This new partnership should include three pillars: single market integration and the reconstruction of Ukraine; the energy and climate transition; and stronger political cooperation in security matters.

“It is important that Germany and Poland as countries with key interests in the Ukraine war should work particularly closely to drive this new project forward.”