Things are going well, then? Liz Truss has been dragged into another serious political battle - against a shop-bought lettuce. 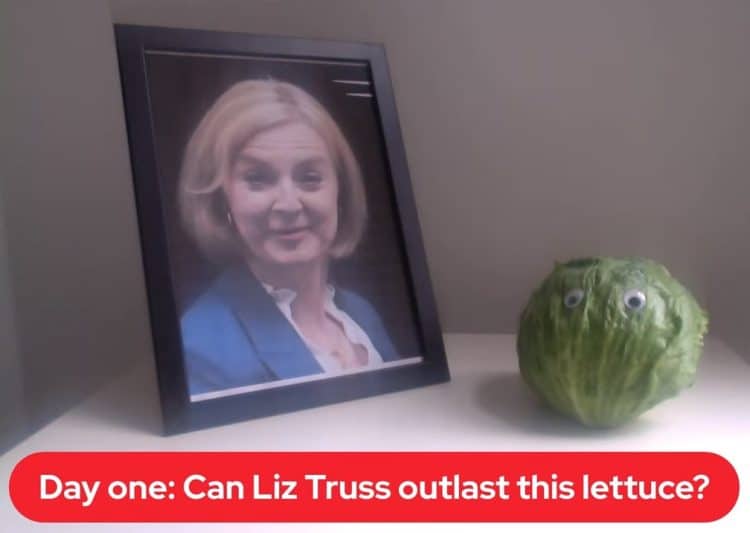 No matter how bad Liz Truss’ premiership could have gone, surely not even her fiercest critics could have envisioned this. The Prime Minister now finds herself in a longevity contest with a shop-bought lettuce – thanks to the Daily Star.

The tabloid publication has made a name for itself recently, by absolutely eviscerating the government. A number of front-page splashes have gone viral this year, and their latest stunt now has the nation captivated.

On YouTube, the Daily Star have shared a live stream of a lettuce – completely with googly eyes, a wig, a set of smiling lips, and even a mug of tea – next to a picture of Liz Truss. The food item has a shelf-life of roughly 10 days, and tends to decompose after about 35 days.

The Prime Minister has until the start of next week to survive past the shelf-life date, and until the end of November to completely outlast her well-matched opponent. This stunt has made international headlines worldwide, as the UK’s reputation remains in tatters.

Catastrophic economic plans presented by Truss and Kwasi Kwarteng have sent the markets into meltdowns. Only intervention from the Bank of England prevented a major collapse, and the value of the pound has plummeted dramatically this month.

Race is on for Liz Truss to outlast this lettuce

Even the US President has had his say on the whole disaster-class. Joe Biden has branded Truss’ plans a mistake, and said that the turmoil was ‘wholly predictable’. The Conservative leader was also branded a ‘libertarian jihadist’ by a fellow Tory MP on Sunday.

Amongst the criticism, perhaps there no words more damning than those that came from The Economist. It was in this esteemed publication that Liz Truss was said to have ‘the shelf-life of a lettuce’. Thus, a sensational idea was spawned.