The Tory leadership favourite evaded answering a question about the Back to Black pamphlet by suggesting the BBC does not get ‘facts right’. 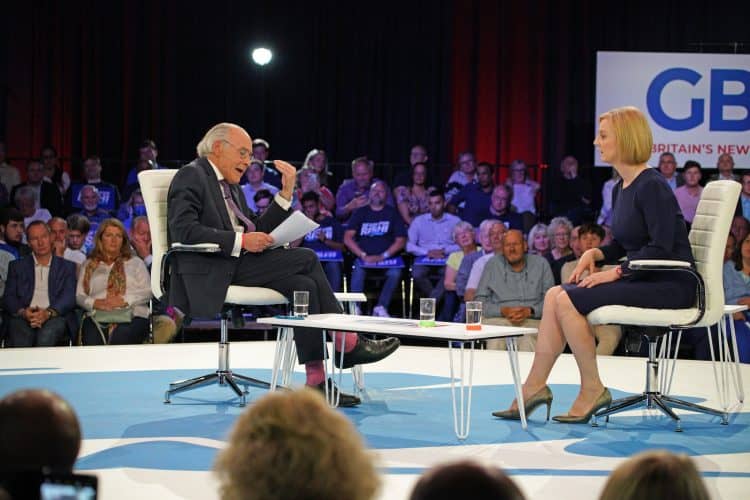 Tory leadership frontrunner Liz Truss successfully sidestepped a question about a controversial report she co-authored in 2009 by mocking the BBC’s journalistic standards.

During the GB News Tory leadership hustings in Manchester on Friday, Alastair Stewart tried to ask her about a pamphlet which she co-wrote when she was deputy director of the Reform think tank.

It called for patients to be charged to see their GP and for doctors’ pay to be slashed by 10%, as first reported by TalkTV’s The Newsdesk on Thursday.

Ms Truss and six others wrote the 40-page report, entitled Back to Black, which also suggested abolishing universal child benefit.

At Friday’s hustings, Mr Stewart said: “A piece that you contributed to back in 2019 Reform about budget considerations has caused…”

He replied: “I do beg your pardon, it’s a typo.

Ms Truss laughed and said: “I always thought you had high-quality standards at GB News.”

But Liz Truss replied: “It’s not the BBC, you actually get your facts right.”

The broadside at the BBC drew loud applause from the audience.

“None of this was rehearsed, I promise absolutely.”

Under a section called “Introduce user charges for GPs”, the pamphlet states: “User charges should be introduced and there should be greater reliance upon other health professionals … for treating less serious ailments”.

It claims that such fees “could save the NHS money” and “would lead to a reduction in demand, which would, in turn save the NHS the costs of providing unnecessary services”.

“Reduce the pay of doctors and NHS managers by 10%,” the report continues.

“Remove pensioner gimmicks, such as the winter fuel payment and free TV licences for over-75s…

Ms Truss’s campaign was approached for comment on the 2009 report, and told The News Desk: “Co-authoring a document does not mean that someone supports every proposal put forward.

“Liz is focused on her bold economic plan to boost growth, cut taxes and put money back into hardworking people’s pockets”.