Benjamin Zephaniah talks to TLE about the Black Lives Matter protests and the current political environment. 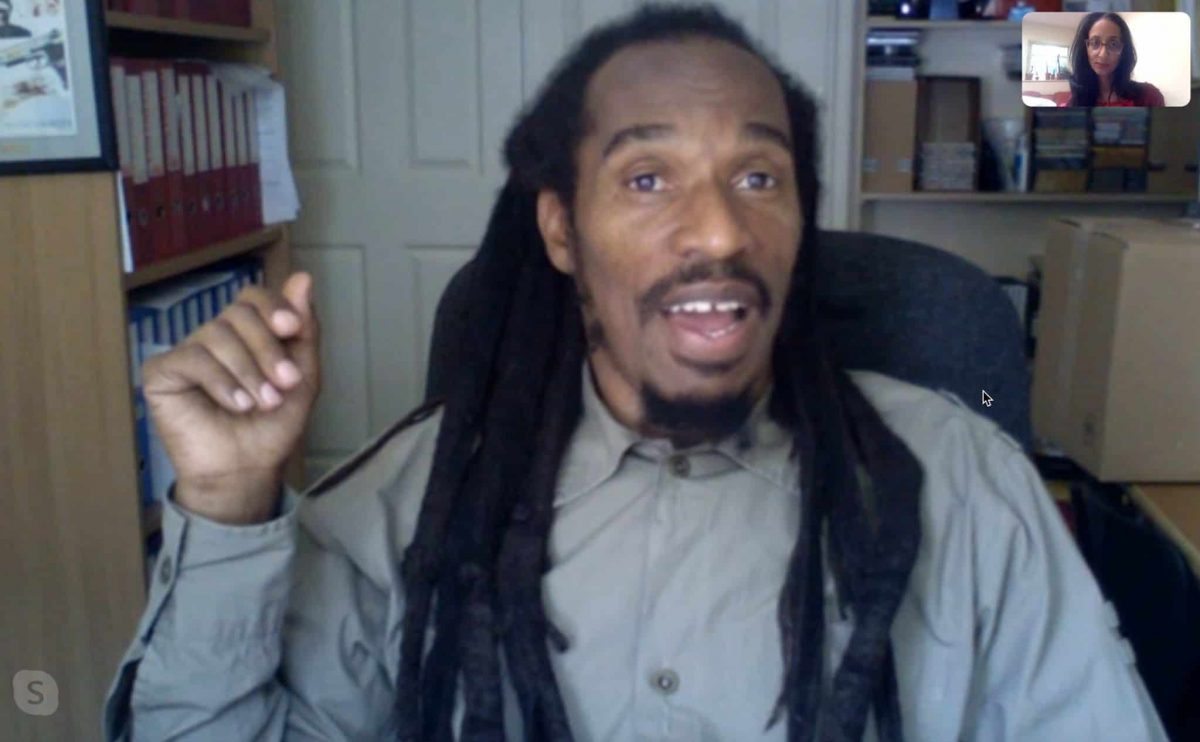 Benjamin Zephaniah says the Black Lives Matter movement is testament to how little has changed since stop and search police brutality that gave rise to the Brixton riots, and that the world should “make some noise” instead of observing a one minute of silence for victims of systemic institutional racism.

The legendary dub poet who is a patron of the UK Chagos Support Association has dedicated a lifetime of work to vocalising the realities of institutional racism.

He said he understood the sentiment behind kneeling for George Floyd, but it was not something he resonated with. “I was thinking the other day if I would kneel like that. When people say “let’s have a minute’s silence for Stephen Lawrence, I go, ‘no, we don’t want one minute of silence, we want one minute of noise.’”

We’ve been silent for too long

He said that when he performs his Stephen Lawrence poem with his band, “I have this section at the end where I say ‘now make some noise for Stephen Lawrence,'” and the audience go crazy.

“What gets me, is we’ve been silent for too long, and standing there silently, to me, the symbolism doesn’t really grab me. It’s a bit like clapping for NHS workers.”

Speaking of which, he said it “bothers” him to see Boris Johnson clap for NHS workers and that it is “really telling” when those who clap “had voted for those same NHS workers to go back to their countries.”

But he said the black power fist was preferable to kneeling for eight minutes and 46 seconds, for which US Democrats were criticised on social media.

But the criticism did not only stem from donning Ghanian Kente cloth — but also for the symbolism of re-enacting Floyd’s death by kneeling because of the time it took for him to die.

But he said it was “important not to get caught up” in the debate over how to show solidarity for the Black Lives Matter movement. “We have to be very careful. People are dying and that’s more important.

“If some people want to kneel, that’s up to them. But I do think the black power fist is more potent because it connects us to the past, to the legacy of Malcolm X, to Stokely Carmichael, to Maya Angelou, and to the apartheid movement.”

The fight against institutional racism, he said, required “solidarity” between all people – not just black people.

He said political activist Tariq Ali told him how Malcolm X had said: “I’ve been telling all these people that have been listening to me, that this struggle is about black people, only we alone can do it for ourselves.

“But then he realised, we need all people to come together, and he said , ‘I’ve got to go back to the states now and tell them I’ve changed my mind,’ but within nine days, he was dead. So unity is strength.”

He said BLM movement today is a far cry from the days when it was a purely black movement, and this gave him “hope” for the future and in the UK’s young generation.

“I watched one protest the other day, I think it was in Germany and it was all white. Black people were the minority, but the anger these white kids felt, I just thought, yeah.”

He said the UK “does multiculturalism better than most” and this gave him “so much faith in the younger generation.”

“They give me so much hope for the future. That may sound naive, and I can’t back it up with science or data, but I simply believe in the victory of good over evil.”

For the movement to be effective, he added, it was “important for the white people who walk amongst us to educate their communities.”

“I used to get invited to a school in Devon to recite poetry in the morning and play football in the afternoon. And I asked the woman who arranged this, “why do you make such an effort to bring me all the way down here?

“She told me ‘I spend a good half of my budget to bring you here Benjamin, because there are no black people here and we need this more than ever.’”

He said George Floyd’s killing was reminiscent of his cousin Mikey Powell’s death, who died in police custody in 2003.

“It was a foot on the neck rather than a knee, and it was inside the vehicle, not outside.

“We took the police to court, he got off and then we had an inquest, and the inquest said he died of asphyxiation. But we couldn’t charge the police. It was just like Floyd. They kind of admitted they had their foot on his neck and because they couldn’t identify exactly which police officer, they couldn’t open the case.

“Now we have a thing called ‘guilt by association.’ So if a gang of kids go out and one kid kills another, it’s the whole gang that gets blamed. If that had been applied to Mikey’s case, we wouldn’t have had to identify the individual who did it.”

Speaking about Rodney King, who was beaten by LA police officers in 1991, he said: “We saw what happened to him on television, and at the time I thought this is it, the world is going to change now, pictures never lie, this is what we’ve been waiting for. But the cops still got off. I was like, what do we need to do?”

Tearing down the system to start again is one option that Zephaniah has voiced in the past.  He told The London Economic: “I’m a revolutionary. And as much as I’d like this to happen, it’s not going to happen next week.

“But if we have to operate within this parliamentary system, then we need a really left wing government”.

Colonial history and black writers’ voices are also crucial to “teach the truth about atrocities committed by people like Winston Churchill and Edward Colston,” he added.

“As a humble poet, but when people tell me they love my work, I feel embarrassed because I’ve done bad things in my past. I’m not perfect. But the problem with a lot of people on the right is they’re not willing to criticise themselves, or their own heroes.”

The dilemma of protesting in the BLM marches in the age of COVID-19 is challenging for many, he said. But as a black man in his sixties who had TB as a child, and more recently, witnessed family members die from coronavirus, he was in the “danger zone,” and could not afford the risk.

He added: “But we have to also express our anger. And if I was young, I’d be out there too. But I’d also be careful about who I’m coming home to.”

Right now, he said, it is more necessary than ever for young black people to express their creativity.

In answer to a question about this from 17 year old BLM member Kesena Mordi, he said: “There’s nothing like human beings with all their faults and vulnerabilities telling their truth, even if their reality is far removed from yours.

“So don’t worry about fashion or trends. Tell your story, because there’s nothing like someone telling their own personal view, their own experience and their own pain, and expressing it from the heart.”

Related: Johnson’s racial inequality commission written on ‘back of a fag packet’ – Lammy