The shadow chancellor, who visited the Australian inmate at HMP Belmarsh, compared the WikiLeaks founder’s plight to the Dreyfus case in France. 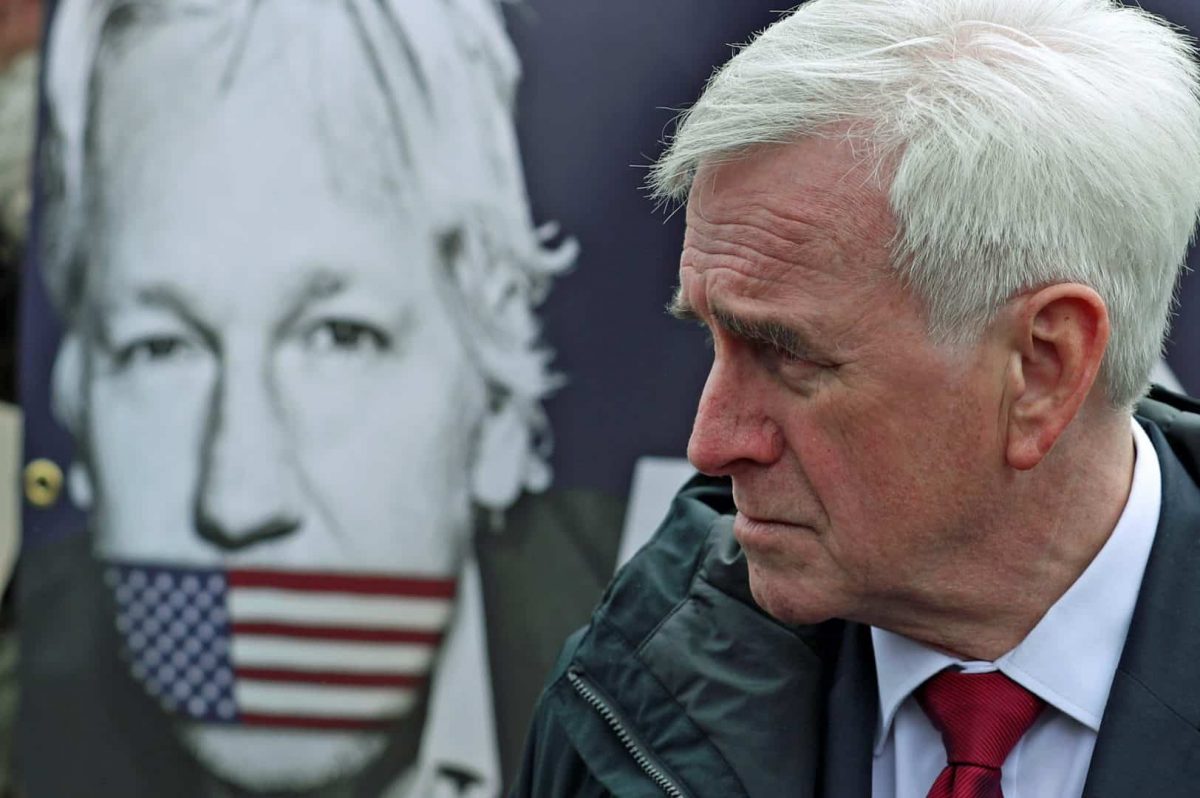 WikiLeaks founder Julian Assange should not be extradited to the US because it would “damage the democratic standing” of the UK, shadow chancellor John McDonnell has said.

The Labour politician on Thursday visited Assange for two hours at Belmarsh prison in southeast London, where the Australian is awaiting the start of an extradition hearing next week.

The Dreyfus case of our age

Speaking to the press afterwards by the prison gates, Mr McDonnell said: “I think this is one of the most important and significant political trials of this generation, in fact longer.

“I think it’s the Dreyfus case of our age.

“The way in which a person is being persecuted for political reasons, for simply exposing the truth for what went on in relation to recent wars.”

Mr McDonnell was referring to the 1895 conviction at a court martial of French officer Alfred Dreyfus on treason charges many felt were brought against him because he was Jewish.

He was later exonerated after a long campaign featuring intellectuals such as novelist Emile Zola who wrote a denunciation of the prosecution case entitled J’Accuse (I accuse).

Mr McDonnell said: “We’re hoping that in court he (Assange) is able to defeat the extradition bid.

“We don’t believe that extradition should be used for political purposes.”

Assange, 48, is wanted in the US to face 18 charges, including conspiring to commit computer intrusion, over the publication of US cables a decade ago.

If found guilty he could face up to 175 years in jail.

He is accused of working with former US army intelligence analyst Chelsea Manning to leak hundreds of thousands of classified documents.

Mr McDonnell said Assange’s health had been affected by his imprisonment but said he appeared “strong” and “determined” to fight his extradition.

“This is all about the protection of sources, whistleblowing, ensuring that people have true information in the public domain on which they can make they own judgments,” Mr McDonnell said.

He added: “I think if this extradition takes place it will damage the democratic standing of our own country as well as America.

On Tuesday it emerged that fellow inmates at the high-security Belmarsh successfully lobbied for Assange’s release from solitary confinement.

Assange’s legal team have claimed his health has deteriorated in recent years as he sought to avoid extradition.

Assange’s father John Shipton said his son’s condition has improved, but said if he was extradited it would be akin to a “death sentence”.

He made his comments after a group of 117 doctors and psychologists called for an end to what it calls “the psychological torture and medical neglect” of Assange.

The hearing is due to begin at Woolwich Crown Court on Monday, beginning with a week of legal argument.

At a court hearing on Wednesday it emerged US President Donald Trump allegedly offered Assange a pardon if he said Russia was not involved in the leak of Democratic National Committee emails.

A series of emails embarrassing for the Democrats and the Hillary Clinton presidential campaign were hacked before being published by WikiLeaks in 2016.

The White House denied the allegation.

Assange has been held on remand in Belmarsh since last September after serving a 50-week jail sentence for breaching his bail conditions while he was in the Ecuadorian embassy in London.

He entered the building in 2012 to avoid extradition to Sweden over sex offence allegations, which he has always denied and were subsequently dropped.