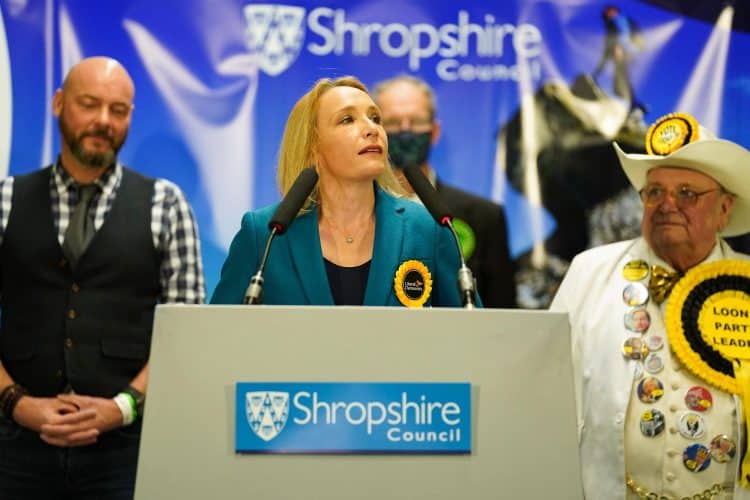 Boris Johnson has been warned he is in “last orders time” after the Liberal Democrats overturned a massive Tory majority to win the North Shropshire by-election.

Conservative support in the ultra-safe seat collapsed as the Lib Dem candidate Helen Morgan sailed to victory by 5,925 votes, in another body blow to the Prime Minister’s battered authority.

Opposition parties and Tory MPs were quick to seize on the result as a verdict on the performance of the Government, after weeks of damaging headlines over “sleaze” and reported partying in breach of Covid rules.

Conservative Party chairman Oliver Dowden acknowledged the voters had given the Government a “kicking”, but insisted Mr Johnson had the vision to get them through a difficult period.

But after the revolt earlier this week by 100 Tory MPs over the latest Covid restrictions, the veteran backbencher Sir Roger Gale warned the Prime Minister was living on borrowed time.

“Two strikes already, one earlier this week in the vote in the Commons and now this. One more strike and he’s out.

“We got rid of a good prime minister to install Mr Johnson.

“Johnson has to prove that he’s capable of being a good prime minister and at the moment it’s quite clear that the public don’t think that that’s the case.”

With the mood in the party having been described as “sulphurous” even before the result, senior backbencher Sir Charles Walker warned  a leadership challenge would be “completely self-indulgent”.

Under party rules, the chairman of the Conservative backbench 1922 Committee, Sir Graham Brady, is required to call a vote of no confidence in the Prime Minister if 54 Tory MPs submit a letter to him calling for one.

Sir Charles, who is the committee vice-chairman, acknowledged voters were “tired, angry, exhausted” but insisted it was not the time for a leadership contest.

“The Conservative Party is not going to have a leadership challenge as we are heading into potential further restrictions around Covid and difficulties around Covid,” he told the Today programme.

“That would be completely self-indulgent.”

The by-election was triggered by the resignation of Owen Paterson, with many Tory MPs still angry at the Government’s botched attempt to get him off the hook after he broke the rules on paid lobbying by MPs.

The former minister held the seat with a majority of almost 23,000 at the 2019 general election but the contest was overshadowed by reports of No 10 parties last Christmas in breach of lockdown rules.

Dowden acknowledged voters were angry with the Government but insisted Johnson was still an “electoral asset” for the Tories.

“Voters in North Shropshire were fed up and they gave us a kicking. I think they wanted to send us a message and I want to say as chairman of the Conservative Party we’ve heard that loud and clear,” he told Sky News.

“We need to get on with delivering the job and that’s precisely what we’re doing.”

However, coming after the the Lib Dems’ victory earlier in the year in the Chesham and Amersham by-election, where they overturned another big Tory majority, party leader Sir Ed Davey said it was a “watershed moment” in British politics.

“We’ve now this year beaten the Conservatives in two of their safest seats,” he said.

“Liberal Democrats have proven the Conservatives can be beaten anywhere. And I think people are so fed up with Boris Johnson, so fed up with his incompetence and his behaviour, I think they’ll be really happy about that.”

Labour shadow business secretary, Jonathan Reynolds, said it was a “terrible result” for the Conservatives.

He told BBC Breakfast: “Clearly, people have wanted to send a message to the Government they’re fed up with the incompetence, the sleaze, the kind of revelations we’ve seen over the last few weeks.”

Morgan won 17,957 votes, pushing Tory candidate Neil Shastri-Hurst into second place on 12,032, with a 34 per cent swing to the Lib Dems – the fourth largest in a by-election in the last 30 years.