“Tonight, the people of North Shropshire have spoken on behalf of the British people." 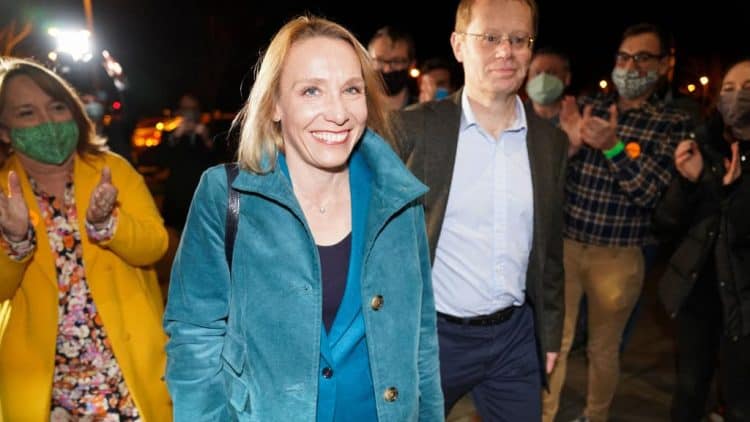 The Liberal Democrats have overturned a huge Tory majority to win the North Shropshire by-election in a seismic victory that will pile further pressure on Boris Johnson.

In one of the most comprehensive by-election defeats in recent decades, the Conservatives lost what was an ultra-safe seat to Lib Dem Helen Morgan by 5,925 votes.

The Prime Minister’s authority was dealt another blow with the swing to the Lib Dems a massive 34% in the ballot triggered by the resignation of Owen Paterson.

The former minister had a near-23,000 majority in the West Midlands constituency in the 2019 general election when the Mr Johnson achieved a landslide, but support evaporated as the Tories battle damning allegations on multiple fronts.

Not only was the vote triggered by the sleaze scandal centred on Mr Paterson, it came after the beleaguered Prime Minister has been battered by claims of lockdown-breaching parties in Downing Street.

And the defeat will cap a torrid week that included the massive rebellion Conservative backbenchers dealt Mr Johnson on Tuesday over his new coronavirus restrictions as the Omicron variant surged.

“Tonight, the people of North Shropshire have spoken on behalf of the British people. They have said loudly and clearly, ‘Boris Johnson, the party is over’,” Ms Morgan said in her victory speech.

“Your Government, run on lies and bluster, will be held accountable. It will be scrutinised, it will be challenged and it can and will be defeated.”

North Shropshire had returned a Tory MP in every vote since 1983, which was the constituency’s first election in its current form.

But the Brexit-backing area has been true blue, only twice voting for another colour, since the Conservative Party’s inception in 1830.

Mr Paterson represented the constituency for 24 years until his resignation after the Prime Minister’s botched attempt to shield him from a 30-day suspension.

Mr Johnson attempted to force a Tory-led review of the rules for MPs after Mr Paterson was found to have breached lobbying rules for two companies paying him £100,000 a year.

Multiple fresh allegations of sleaze were levelled at the Tories during the row and ultimately the MP was forced to resign, saying he wanted to escape the “cruel world of politics”.

Leaving the election count in defeat, Mr Shastri-Hurst was asked if the Prime Minister was to blame for the dismal result.

“We’ve run a positive campaign here, I’m extremely proud of the work that everybody’s done. Of course it’s a disappointing result for us,” he told reporters.

Asked if the party needs to change, he said: “We’re 11 years into a Conservative Government, by-elections are never an easy thing to do.”

Ms Morgan came third with just 10 per cent of the vote when facing Mr Paterson in the general election.

Thursday’s defeat compounds a tumultuous period for Mr Johnson after 100 Conservatives defied the leadership to vote against the introduction of mandatory Covid health passes for entry to large venues – the biggest rebellion since he entered No 10.

Asked on Wednesday if Mr Johnson would quit if North Shropshire falls, the Prime Minister’s press secretary said: “We are fighting for every vote.”

“Fighting for every vote”

The 34 per cent swing to the Lib Dems was the fourth largest in a by-election in the last 30 years and even bigger than in the party’s first seizure of a former Tory stronghold since the general election.

Chesham and Amersham had been a Conservative stronghold since the constituency’s creation in 1974, but the Lib Dems took it with a 25 per cent swing from the Tories in July.

Ms Morgan, a 46-year-old accountant who lives in the Shropshire village of Harmer Hill, will become the newest MP having beaten Mr Shastri-Hurst, a barrister based in Birmingham.

Lib Dem leader Sir Ed Davey, in a statement from isolation after testing positive for Covid-19, said: “This result is a watershed moment in our politics and offers hope to people around the country that a brighter future is possible.

“Millions of people are fed up with Boris Johnson and his failure to provide leadership throughout the pandemic and last night the voters of North Shropshire spoke for all of them.

“The party is over”

“From Buckinghamshire to Shropshire, lifelong Conservatives have turned to the Liberal Democrats in their droves and sent a clear message to the Prime Minister that the party is over.”

Labour was also celebrating the victory, with a source arguing it was a “disaster” for Mr Johnson which shows he is “too weak to lead”.

“Not only has the Prime Minister lost his authority in the House, he’s lost control of his party, and he’s lost the benefit of the doubt with the public,” they said.

Related: Another one?! PM joined party in No 10 during first lockdown, it’s claimed