Marr said he didn't consider his dad's funeral - which took place on the week of a No 10 party - as "fluff". 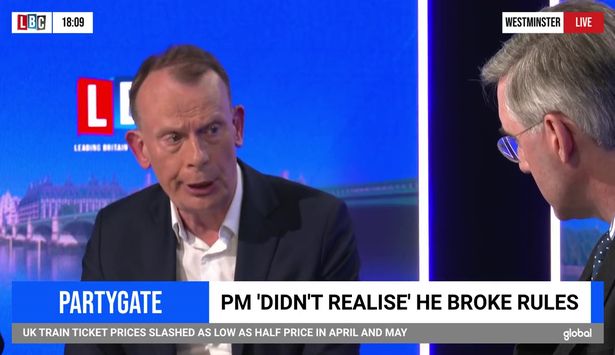 Jacob Rees-Mogg told Andrew Marr that people need to “get a sense of perspective” over Partygate, after the broadcaster opened up about burying his father while Downing Street parties.

In a jaw-dropping clash, the top Tory stood by his controversial claim that Partygate was “fluff” – even after Marr showed his “intense anger”.

The former BBC broadcasting veteran, who now helms a nightly LBC show, said: “I buried my father on the week that one of those parties took place and it was a party.

“He was an elder of the Church of Scotland – that church was locked and barred.

“We had a small gathering, most of the family weren’t there. The other parishioners he would have loved to be there weren’t allowed to be there because we followed the rules.

“And I felt intensely angry about that – and I do not regard this as fluff.”

But, when pressed, he did not disavow his use of the word fluff – even now that Johnson has been fined by the police.

The Brexit opportunities minister said: “What is happening now two years on against what’s going on in Ukraine, what is going on with the cost of living crisis, one has to get a sense of perspective.

“What is going on in Ukraine is fundamental to the security of the Western world. And you are comparing this to a fine issued for something that happened two years ago.”

Marr responded that what happened to him also “happened to so many others up and down the country”, adding: “We find, I would say, that word ‘fluff’ quite offensive.”

But Rees-Mogg was undeterred, saying: “I still think that in comparison with the war in Ukraine… a fine for something that happened two years ago is not the most pressing political matter.”

He added: “The Daily Mail headline said ‘don’t forget there’s a war on’ and this is something we have to remember – we need a sense of perspective”.

Related: Church and BBC round on Boris over ‘disgraceful Ukraine slur’