The First Minister was speaking after the SNP picked up 48 of the 59 seats in Scotland in the General Election. 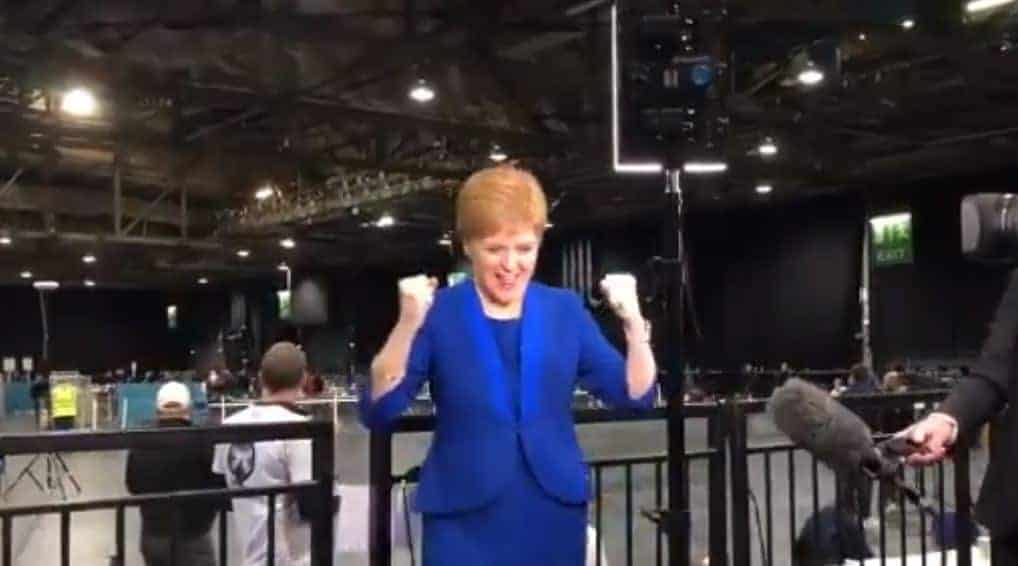 A second vote on Scottish independence is now a “democratic right” after the SNP’s victory in Scotland in a “watershed” General Election, Nicola Sturgeon has declared.

The First Minister confirmed she will formally request the powers for Holyrood to hold a ballot, saying the Scottish Government would “publish the detailed democratic case for a transfer of power to enable a referendum to be put beyond legal challenge”.

Speaking after the SNP increased its tally of MPs to 48 – at the same time as the Conservatives lost more than half the seats they had held north of the border – the First Minister said Scotland has chosen a different future than the rest of the UK.

Ms Sturgeon said the “stunning” result for the SNP “renews, reinforces and strengthens” the mandate for a fresh vote on independence.

The SNP leader said: “This is not about asking Boris Johnson or any other Westminster politician for permission.

“It is an assertion of the democratic right of the people of Scotland to determine their own future.”

Mr Johnson has already made clear he is not prepared to grant a section 30 order – which would transfer the power to Holyrood to hold a referendum.

But Ms Sturgeon said the Tories – who focused their election campaign north of the border on their opposition to a second independence vote – had suffered a “crushing defeat in Scotland”.

The Conservatives were left with six MPs in Scotland, after having won 13 seats two years previously.

Speaking at a press conference in Edinburgh, Ms Sturgeon said: “Given what I fear the Tory Government has in store for Scotland, that right to choose our own future has never been more important.”

She told Mr Johnson directly: “Let me be clear. This is not simply a demand that I or the SNP are making.

“It is the right of the people of Scotland – and you as the leader of a defeated party in Scotland have no right to stand in the way.”

With Scotland having voted to stay part of the European Union in 2016, the First Minister claimed “Westminster has ignored people in Scotland for three years”.

Ms Sturgeon told the Prime Minister is was time to “start listening”.

She said she accepted “regretfully” Mr Johnson had a mandate for Brexit in England but added: “He has no mandate whatsoever to take Scotland out of the EU.”

The First Minister said: “It is clear that that the kind of future desired by the majority in Scotland is different to that chosen by the rest of the UK.

“Scotland has rejected Boris Johnson and the Tories and, yet again, we have said no to Brexit.”