The portrait was unveiled as the prime minister prepares to take to the stage in Birmingham at the Tory Party Conference. 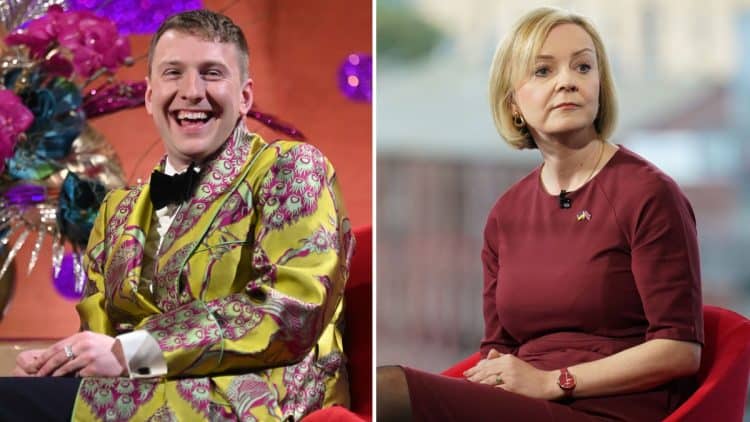 “Incredibly right-wing” comedian Joe Lycett has unveiled a portrait of Liz Truss ahead of her conference speech in Birmingham.

The Brummie lad revealed the artwork as the prime minister continues to battle market turmoil and division from within her own party.

Yesterday, home secretary Suella Braverman doubled down on her calls for the UK to leave the European Convention on Human Rights (ECHR) – even though that is not government policy.

Penny Mordaunt, the Leader of the House of Commons, also seemed to be at odds with Truss over benefits payments, a stance supported by former Tory leader Iain Duncan Smith.

On the back of the turmoil, long-standing Truss fanboy Lycett appeared to stand by the beleaguered PM, unveiling his latest artwork and a ‘In Liz We Truss’ caption wedged between two Union Jack emojis.

On Instagram, he added: “While diners enjoyed the fruits of my small garden and the genius of the kitchen I sat in the corner of the restaurant painting.

“One of the paintings was of the Prime Minister, who across the city was refusing to tell journalists if she would support raising benefits in line with inflation, a policy which will undoubtedly affect and likely increase the homeless population of this country. IN LIZ WE TRUSS, BABY!!!”

In his original interview with Kuenssberg, Lycett sarcastically claimed that he believed Truss’s promise of support to help cover energy bills amid the cost of living crisis.

“Yeah, she was very clear what she said,” he said. “I think you know exactly what’s going to happen. I’m reassured, you’re reassured.

“I think the haters will say we’ve had 12 years of the Tories, and that we’re sort of at the dregs of what they’ve got available, and that Liz Truss is sort of like the backwash of the available MPs. I wouldn’t say that, because I’m incredibly right-wing, but some people might say that.”