"I don't need Sue Gray to tell me I went" to a party, the shadow climate secretary said during a blistering attack on LBC. 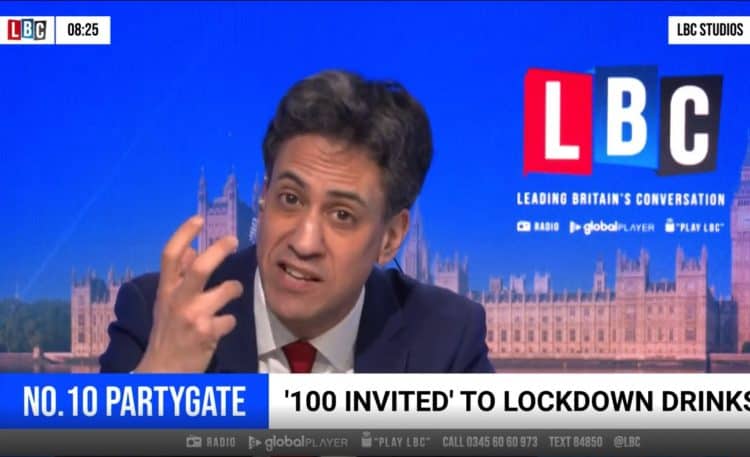 Ed Miliband’s blistering attack on Boris Johnson has been making the rounds on social media this morning.

The shadow climate secretary appeared on Nick Ferrari’s LBC breakfast show after it was revealed the prime minister’s aide organised a “bring your own booze” Downing Street drinks party during the first lockdown.

Mr Johnson has refused to answer questions about the latest allegation of rule-breaking, instead claiming the public should wait for the conclusions of an investigation by senior civil servant Sue Gray – a line repeated on Tuesday morning by health minister Edward Agar.

But Miliband has moved quickly to ridicule the line of defence – saying “if I went to a party, I know I went.

Johnson has come under significant pressure to resign this morning, with a former Conservative attorney general branding him a “serial liar”.

Dominic Grieve accused the PM of a pattern of behaviour that is undermining trust, including by lying about potential rule-breaking gatherings at Number 10.

He said: “He ought to be in a lot of trouble because he’s told a series of untruths about these issues over a period of time and the latest evidence clearly suggests that the rules were broken.

“There may be mitigating circumstances for that, I don’t know. But it’s part of a pattern of behaviour by him which undermines trust. And because trust is undermined, it then becomes very difficult to accept anything he says on any topic whatsoever.”

Mr Grieve said he thinks the public now has “very little” trust in Mr Johnson and added: “The difficulty we have here is that we have a Prime Minister who’s effectively a serial liar.”

Speaking on the BBC’s Good Morning Scotland programme, he said: “My impression is that there are many MPs who are deeply unhappy about him, but the difficulty is that replacing a prime minister requires courage, it requires the upheaval that goes with it, and it requires the coordination necessary to get him removed.

“I think it’d be very desirable if he were removed.

“I think the Conservative Party would find that it has a much better future without him than it has with him at present.

“But whether that’s going to happen in the short-term future, I think is open to doubt. In the longer term, I think that he is going to have great difficulty recovering from these events.”