One reader called the group "deluded", while another questioned why they show a "relentless lack of faith in their own country". 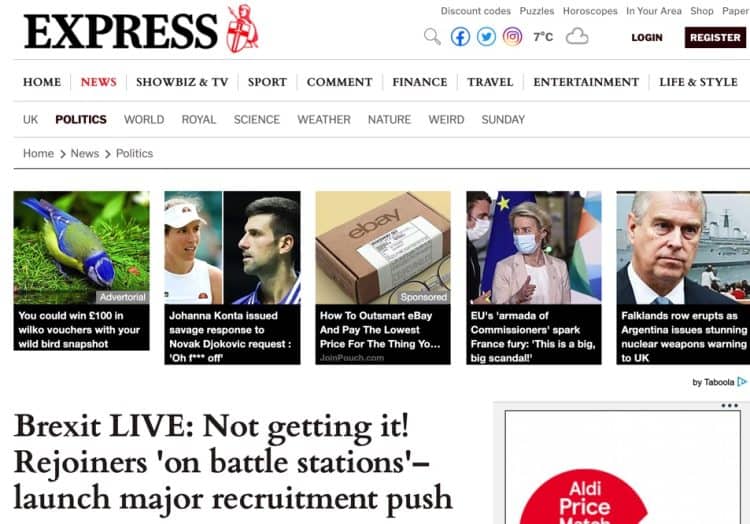 Daily Express readers have expressed their anguish at news that a new ‘Rejoin’ movement is on battle stations to launch a major recruitment push ahead of the next general election.

The European Movement has added Scientists for EU founder Dr Mike Galsworthy and social media influencer and Inspire EU founder Jack Dart to its books as indications show the tide is turning on Brexit.

The all-party pressure group that it “is on battle stations” and has recruited more staff than ever before, much to the bewilderment of the Express newspaper, who said they are “not getting it!”

Several readers highlighted their dismay at the move, with one person saying such groups should be “banned from manipulating a democratic vote” and another questioning why they show a “relentless lack of faith in their own country”.

Meanwhile, another reader called the group “deluded”. They said, without any basis in evidence, that “if we rejoined we would have to join the Euro and lose the pound and control of fiscal freedom.

“We would have to join the EU army which is in the making.

“We would end up paying Billions on top of what we used to pay to support the Euro zone debts etc etc…and just that’s for starters….”

Commenting on the reaction Mike Galsworthy told The London Economic: “I’m delighted that the Express should rage at my joining the European Movement team – and that they had to reach back to a year ago to find a poll showing support for rejoin at only 39 per cent, which incidentally, is still far more popular than this government which is struggling in the low thirties.”

The latest polling actually shows there has been a four-point surge in support for reversing the 2016 referendum, with 53 per cent backing membership in a survey by Savanta ComRes.

Significantly, one in ten Leave voters now want to rejoin the bloc, as do one in five Conservative supporters, the poll found – while 40 per cent of adults back a fresh referendum within the next five years.