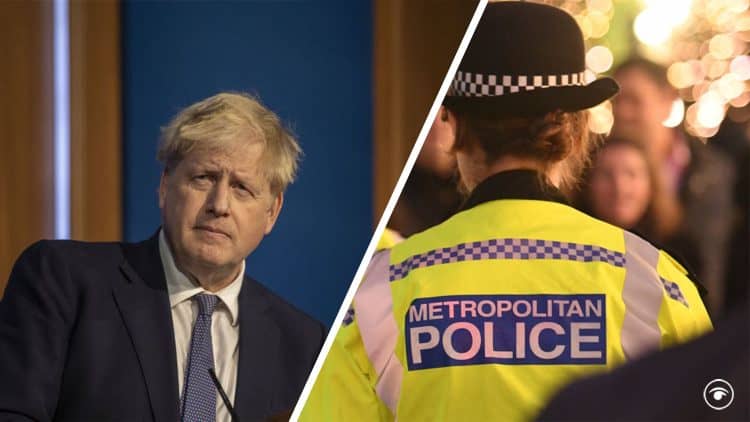 Police are in contact with the Cabinet Office over claims the Prime Minister’s aide organised a “bring your own booze” Downing Street drinks party during the first lockdown.

Following political calls for officers to investigate allegations relating to May 2020, the Metropolitan Police confirmed it is liaising with the Whitehall department over the latest claims.

“Make the most of the lovely weather”

Mr Reynolds said they should “make the most of the lovely weather”, despite England being under tough coronavirus restrictions banning groups from meeting socially outdoors when the message was sent.

A spokesman for Scotland Yard said: “The Metropolitan Police Service is aware of widespread reporting relating to alleged breaches of the Health Protection Regulations at Downing Street on May 20 2020 and is in contact with the Cabinet Office.”

Multiple reports have suggested the Prime Minister attended the event with his wife, Carrie Johnson.

The Conservative Party leader sidestepped questions on Monday about whether he attended the evening gathering allegedly organised by Mr Reynolds.

The Liberal Democrats said if rules were found to be broken then “those responsible should face the full force of the law”.

The party’s home affairs spokesperson Alistair Carmichael said: “This garden party looks like a clear breach of lockdown rules at a time the public were being ordered to stay at home.

“Boris Johnson himself said just days after this party that the police should step in to stop people holding outdoor gatherings.

“It would absolutely reek of double standards if the police don’t investigate these allegations in full.”

The Metropolitan police had tweeted on the day the alleged “bring your own booze” event is said to have taken place, telling people they could have a picnic, exercise or do sport outside providing you are “on your own, with people you live with, or just you and one other person”.

The-then culture secretary Oliver Dowden used a Downing Street press conference that day to remind the public they could “meet one person outside of your household in an outdoor, public place provided that you stay two metres apart”.

No 10 said it would not be commenting on the allegations while Sue Gray, a senior civil servant, carries out her inquiry into numerous allegations of rule-breaking events being held in Downing Street during the coronavirus pandemic.

Downing Street denied reports that Mr Reynolds is to be moved to another post following the claims.

The Prime Minister’s official spokesman said he was staying in his current role.

“The Prime Minister has full confidence in his team. There is no change in that post,” he told reporters on Monday morning.

The spokesman also refused to be drawn on reports that Mr Johnson had attended the event.

“There is an independent process going on to look into this, led by Sue Gray, and I can’t comment further while that is taking place.”

Ms Gray, a Cabinet Office official, as well as looking into the May 20 2020 claims, has also expanded her investigation to look into a garden gathering that took place five days earlier, which was revealed by a leaked photo showing the Prime Minister and staff sat around a table with cheese and wine.

Ms Rayner told ITV News: “It is terrible and I think many people that see the evidence now will not only think that Boris Johnson’s lies are catching up with him, but will see it as absolutely despicable that when they were actually told to follow the rules, Boris Johnson and No 10 were breaking the rules.

“It is disgraceful and he should be ashamed.”

She said that police should step in to investigate if Ms Gray’s inquiry finds coronavirus rules were broken by ministers or Government staff.

Human rights lawyer Adam Wagner, who interprets coronavirus regulations on Twitter for the public, said the alleged event looked “unlikely to be legal for attendees”.

Related: BREAKING: European Movement ‘on battle stations for the next election’