The former health secretary claimed he broke social distancing guidelines "because I fell in love with somebody". 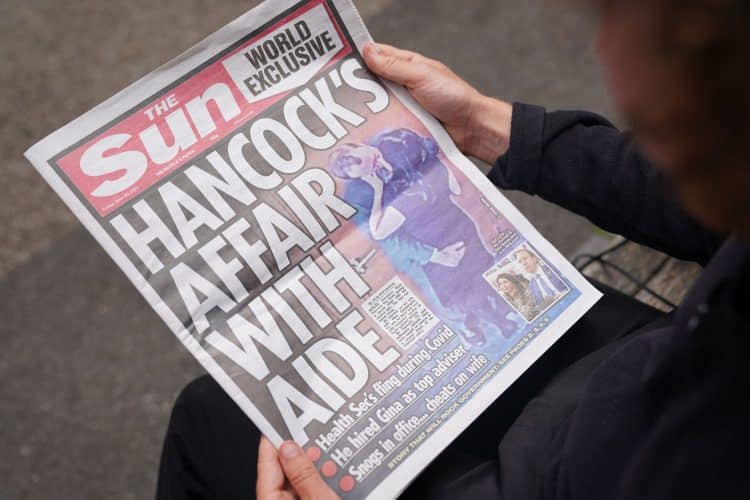 Matt Hancock has claimed the affair that finished his ministerial career was not about “casual sex”.

The former health secretary insisted he fell in love with Gina Coladangelo while they worked together during the pandemic.

Hancock was forced to resign in the summer of 2021 after footage from the Department of Health and Social Care – leaked to The Sun – showed him in a steamy clinch with the married aide, breaching social distancing guidelines.

The rules stated that people should stay two metres apart and not mingle with anyone outside of their strict household bubble. They were eventually relaxed on 17 May, under two weeks after the footage of the pair was captured.

‘They weren’t the law’

But Hancock, speaking to the Diary of a CEO podcast, claimed he did not break the law because it was only guidance which kept people from separate households apart.

He said: “I resigned because I broke the social distancing guidelines by then.

“They weren’t actually rules. They weren’t the law. But that’s not the point. The point is they were the guidelines that I’d been proposing. And that happened because I fell in love with somebody.”

Asked whether his resignation had been the worst period of his life by podcast host, the Dragons Den entrepreneur Steven Bartlett, Hancock replied: “Going through that is undoubtedly the hardest thing I’ve ever done by a long, long way.”

But he insisted his relationship with Coladangelo was serious – and that he had known her “for more than half of my life”.

“I haven’t had casual sex with anybody,” he said. “I fell in love with somebody.”

The former health secretary said he had worked with Coladangelo on a student radio station at Oxford. During the pandemic, they spent “a lot of time together, ironically, trying to get me to be able to communicate in a more emotionally intelligent way”.

He added: “And we fell in love. And that’s something that was completely outside of my control.”

And Hancock said he regretted the “very public” pain that their affair had caused the pair’s spouses and six children.

“Of course, I regret the pain that that’s caused and the very, very, very public nature,” he said. “Anybody who’s been through this knows how difficult it is, how painful it is doing that in public is incredibly painful, but I fell in love with someone.”