"What in the clip art is this poster." 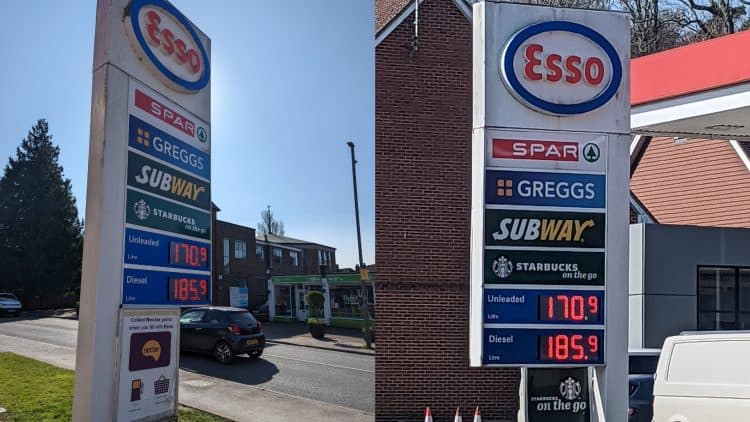 Drivers in the UK say they are still waiting for a fuel cut as their local petrol stations appear not to have reduced prices in line with Chancellor Rishi Sunak’s announcement.

It comes as a graphic to illustrate the change in duty on petrol has been ridiculed online.

Mr Sunak said fuel duty would be reduced by 5p per litre from 6pm on Wednesday, however some customers reported prices rising instead of dropping.

“My local garage has put the price of diesel up by 2p a litre since yesterday. They obviously never got the memo,” @matt76smith wrote on Twitter on Wednesday evening.

Meanwhile @aka_Titch tweeted on Thursday: “OK, so I went to fill up this morning thinking fuel prices will be 5p cheaper. All the prices have gone up by 5p overnight, Diesel was 179.9 buts it’s now 184.9”.

Louise Ali, 39, from Haslemere in Surrey, said a member of staff at her garage was “very much clueless” about whether or not their prices were going to fall.

“I’m really angry to be honest,” she told the PA news agency.

“Some stuff that Rishi said on the surface felt like it was a really good move. But in the case of petrol, what is the good of it if the actual companies owning the petrol stations aren’t going to pass on the reduction?

“I like to hope that there’s going to be something in place where they enforce that, but I don’t know if they can.”

Mrs Ali said she was passing her local petrol station on Wednesday and took a photo of the prices. Revisiting the site on Thursday morning, the cost of unleaded and diesel remained the same.

“I was just like, well, this is an absolute joke – you’ve had overnight to sort this out,” she said.

“And so I went in, I said to the guy ‘what happened? I thought the announcement was it was supposed to be from 6pm? And he was just like, ‘Yeah, that’s what I thought too.’

“He was very much clueless to the thing.”

To explain the cut, if it ever turns up at the pumps, the government went about putting together a graphic to tell the world about their tax cut. However, it seems it just told the good people of the internet that their graphic design skills are truly awful.