The ex-Labour leader said the union is more at risk now than at any time in the past 300 years, including during the 2014 Scottish independence referendum. 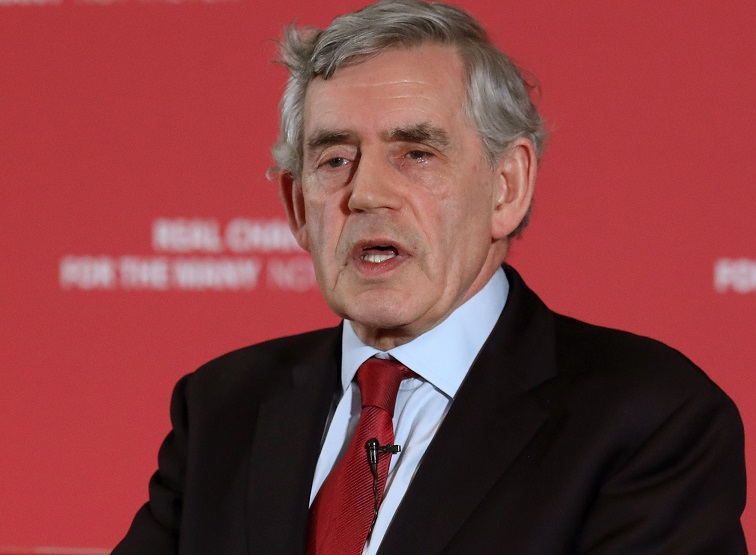 Brexit and rising nationalism means “we are in a battle for the very existence of Britain”, former prime minister Gordon Brown has said.

The ex-Labour leader said the union is more at risk now than at any time in the past 300 years, including during the 2014 Scottish independence referendum.

He warned of twin threats of nationalism from the SNP and hard Brexiteers, and said he believed Boris Johnson would “play the English card” to stoke English nationalism against Scotland if it helps his political career.

He said the national debate is now about more than what kind of Brexit is wanted and instead is about “the kind of Britain we aspire to become”.

“I believe the union is today more at risk than at any time in 300 years – and more in danger than when we had to fight for it in 2014 during a bitter Scottish referendum,” he said.

“I want to argue specifically against the hijacking of patriotism by Nigel Farage and Boris Johnson – a political deception that has tried to present an act of economic self-harm – a no-deal Brexit on October 31 – as a patriotic act.”

He warned the Tory leadership contender’s two decades of writing on the union opposes the “three constitutional pillars upon which today’s union is built – Scottish representation in the UK Parliament, Scottish devolution and Scottish funding”.

Mr Brown said: “The SNP think of him as their best recruiting sergeant for independence.

“And, not surprisingly, few Scots believe the union is safe in his hands, fearing whether through ignorance carelessness or malice he will be prepared to play fast and loose with the union when it suits his personal electoral needs.

“Unless he specifically rules it out, he will almost certainly – and under the influence of his election guru – play the ‘English card’, whipping up English nationalistic fervour against Scotland for English votes that put at risk the union itself.”

He said: “Now they are committed to a wholly separate Scottish pound and to abandon, in a quiet, almost furtive, way the UK customs union and single market which has given us tariff-free, tension-free trade across the four nations for 300 years and prevented what now seems inevitable under independence – a hard border at Hadrian’s Wall separating Scotland and England and life reduced to an unending battle between us and them.

“But just when all mainstream British parties – Conservative, Liberal and Labour – should be waking up to this new threat, on red alert and working together to make the strongest possible pro-union case, those who would seek to defend the union are less and less in evidence.

“Four nations united only by nationalism will not sustain the United Kingdom. It means a house divided that cannot stand for long.

“It is now urgent that those who support Scotland’s role in the UK put the case against the two divisive extremes, Nationalist and Conservative, that threaten to blow the United Kingdom apart.”