The ex-Manchester United used a Daily Mirror interview to brand the tax cuts announced by Kwasi Kwarteng as “immoral” and “madness”. 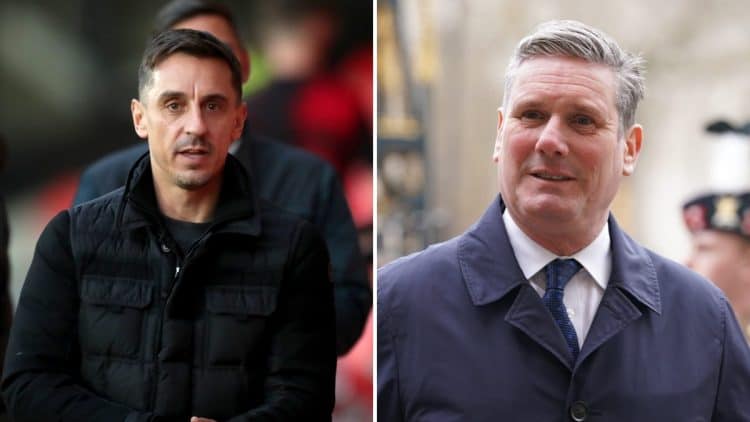 A Labour government would create a state-owned investment fund to back projects which could generate wealth for the nation.

Shadow chancellor Rachel Reeves will use her speech at the party’s conference in Liverpool to set out the plan, which would begin with an initial £8.3 billion investment to fund green industries.

Ms Reeves has the main speech at the gathering on Monday, but party leader Sir Keir Starmer will also appear at the conference alongside former England footballer Gary Neville.

The Sky Sports pundit said Liz Truss was “taking the absolute Mickey out of us” by cutting taxes for the wealthy and declared that having the Labour leader as prime minister would be “a change that cannot come quick enough”.

Ms Reeves’ keynote speech at noon will be a chance for Labour to set out an alternative economic course after Mr Kwarteng’s mini-budget on Friday.

The creation of the national wealth fund could be modelled on similar institutions in countries like Norway and Singapore, and its aim is to create long-term wealth for Britain.

Ms Reeves is expected to say: “Here is the deal: The next Labour government will create a national wealth fund so that when we invest in new industries, in partnership with business the British people will own a share of that wealth and the taxpayer will get a return on that investment.”

Labour wants to target the money at industries where public investment could attract further private sector spending to deliver energy security and a zero-carbon economy.

Ms Reeves will say the plan will result in “wealth that the British people will own a stake in” and “wealth that is invested in our country’s future”.

It would examine progress against four pledges: delivering clean power by 2030, harnessing data for public good, caring for the future and building a resilient economy.

Shadow business secretary Jonathan Reynolds said: “While the Conservatives are dusting off the same tired old policies that got us into this mess, Labour is looking to the future.

“Businesses and workers want a partner in Government that can offer certainty, bringing with it the confidence to invest in Britain.”

Other policy announcements include a commitment to clean up England’s rivers, with a legally binding target to end 90 per cent of sewage discharges by 2030.