Sterling fell by more than 4 per cent to just 1.0327 dollars in early Asia trade, fuelling predictions it could plunge to parity soon. 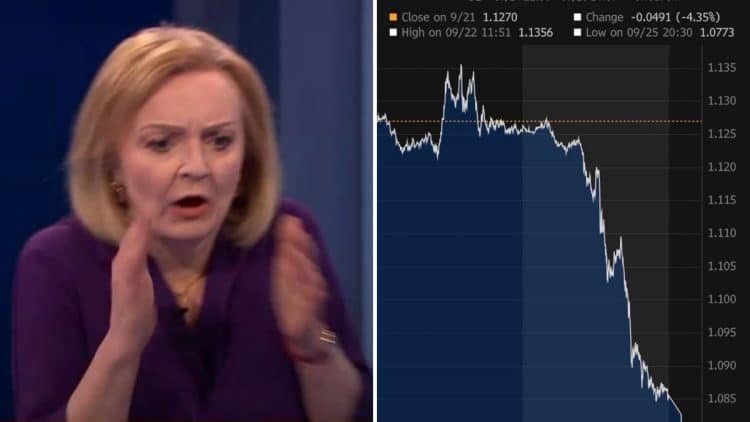 The pound has slumped to its lowest level against the dollar since decimalisation in 1971 after Liz Truss promised to build a ‘World beating economy’ and Kwasi Kwarteng hinted at more tax cuts.

But Mr Kwarteng insisted he is “focused on tax cuts across the board”.

When it was put to him that his measures “favour overwhelmingly people at the very top”, Mr Kwarteng told the BBC’s Sunday With Laura Kuenssberg programme: “They favour people right across the income scale.”

Ms Truss said her Government was “incentivising businesses to invest and we’re also helping ordinary people with their taxes”.

In an interview with CNN, she rejected comparisons with Joe Biden’s approach, after the US president said he was “sick and tired of trickle-down economics”.

The Prime Minister told the US broadcaster: “We all need to decide what the tax rates are in our own country, but my view is we absolutely need to be incentivising growth at what is a very, very difficult time for the global economy.”

Asked whether she was “recklessly running up the deficit,” Ms Truss said: “I don’t really accept the premise of the question at all.”

Three days after his fiscal statement, the Chancellor indicated his announcements were just the beginning of the Government’s agenda designed to revive the UK’s stagnant economy.

He said: “We’ve only been here 19 days. I want to see, over the next year, people retain more of their income because I believe that it’s the British people that are going to drive this economy.”

Mr Kwarteng and Ms Truss could continue their spree in the New Year with possible further reductions in income tax and the loosening of immigration rules and other regulations.

Mr Kwarteng, who has launched a review of all tax rates ahead of a formal Budget, is reportedly considering abolishing a charge for parents who earn more than £50,000 and claim child benefit, increasing the annual allowances on pension pots and a tax break for people who stay at home to care for children or loved ones.

The £45 billion tax-slashing package was met with alarm by leading economists, some Tory MPs and financial markets – with the pound tumbling to fresh 37-year lows.

The slide continued as trading opened in Asia and Australia on Monday, fuelling predictions sterling could plunge to parity with the US dollar by the end of the year.

Such a slump could trigger a rebellion from Tory backbenchers, who could refuse to vote for the Government’s finance bill or submit letters of no confidence, the Telegraph reported, citing backers and critics of the Prime Minister.

Asked whether he was nervous about the diving pound, falling stock markets and rising cost of government borrowing, Mr Kwarteng said: “We’ve got to have a much more front-footed approach to growth and that’s what my Friday statement was all about.

“I think that if we can get some of the reforms … if we get business back on its feet, we can get this country moving and we can grow our economy, and that’s what my focus is 100% about”.

“I’ve been focused on the longer term and the medium term, and I think it was absolutely necessary that we had a long-term growth plan,” he said.