"Shameful. There are now 40 Tories showing more compassion than Labour." 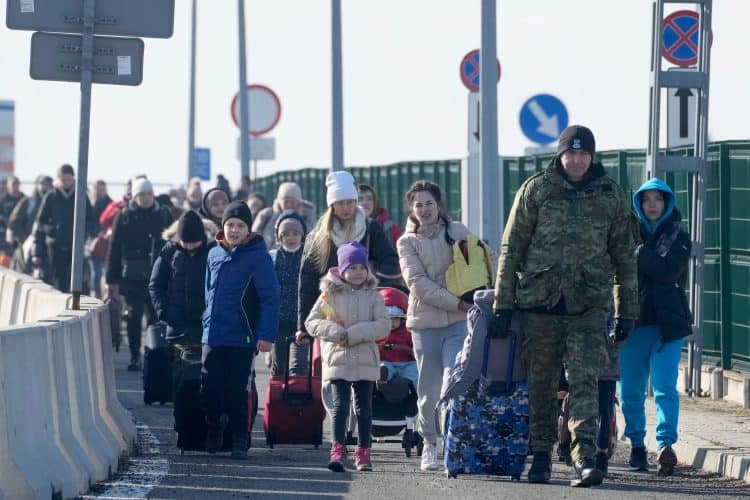 Labour is refusing to back calls for an open door policy for Ukrainian refugees, even after nearly 40 Tory MPs said the UK should adopt one

The party’s international development spokesperson said on Monday that the process for Ukrainians applying to come to Britain should be “simplified” – but did not elaborate.

Preet Kaur Gill said the UK’s visa website should be improved, and that “only those people that have family members in the United Kingdom” wanted to come to Britain.

It comes after Jeremy Hunt – one of 37 Conservative MPs calling on the UK to follow the EU’s lead and welcome refugees fleeing the conflict – told the BBC that Britain had a “long tradition” of helping refugees.

‘Our process is so difficult’

Asked if he supported an “open door” policy like the one adopted by the EU, Hunt told Newsnight: “Yes. And I expect we will get something like that from the next couple of days from the prime minister.

“Remember, he has a track record of being very generous in his offer to people wanting to leave Hong Kong. And I know that Britain has this long tradition of being open to genuine refugees as obviously people fleeing Ukraine are.”

But asked on the same programme whether Labour also backed an “open door” approach, the opposition demurred.

“Well, look, we need a very simplified process,” Preet Kaur Gill said. “What was really clear from the House of Commons today earlier, it was a question that Yvette Cooper put to the Home Secretary was given the current scheme does it actually expand to elderly parents, for example, and she indicated that it did.

“Of course, Yvette had to make a point of order and correct her because that is not the case. At the moment, unless you’re a partner, or you have dependents or someone to care for this scheme does not apply to you.

Gill added: “Our process is so difficult. Just imagine when you go onto the website, how difficult it is to navigate, and all people need from Ukraine is to know that they’re going to be able to join their loved ones.

“Many of these people are women and children. Of course, their partners are left behind. Many of the people fleeing Ukraine will want to stay in neighbouring countries.

“So only those people that have family members in the United Kingdom, they want to be able to come and join them, and we’ve got to enable a process that is simple that enables them to do that.”

Pushed again on whether Labour backed the EU’s approach, she said: “What we’re saying is we need a simplified scheme. We’ve already got one of the Hong Kong one it’s working really well. We need to have something very similar to that.”

Brussels has said it will allow entry to all people fleeing Russia’s invasion of Ukraine and will not require them to apply for asylum.

“I think we will have to prepare for millions,” Alva Johansson, the EU Home Affairs Commissioner, said this week.