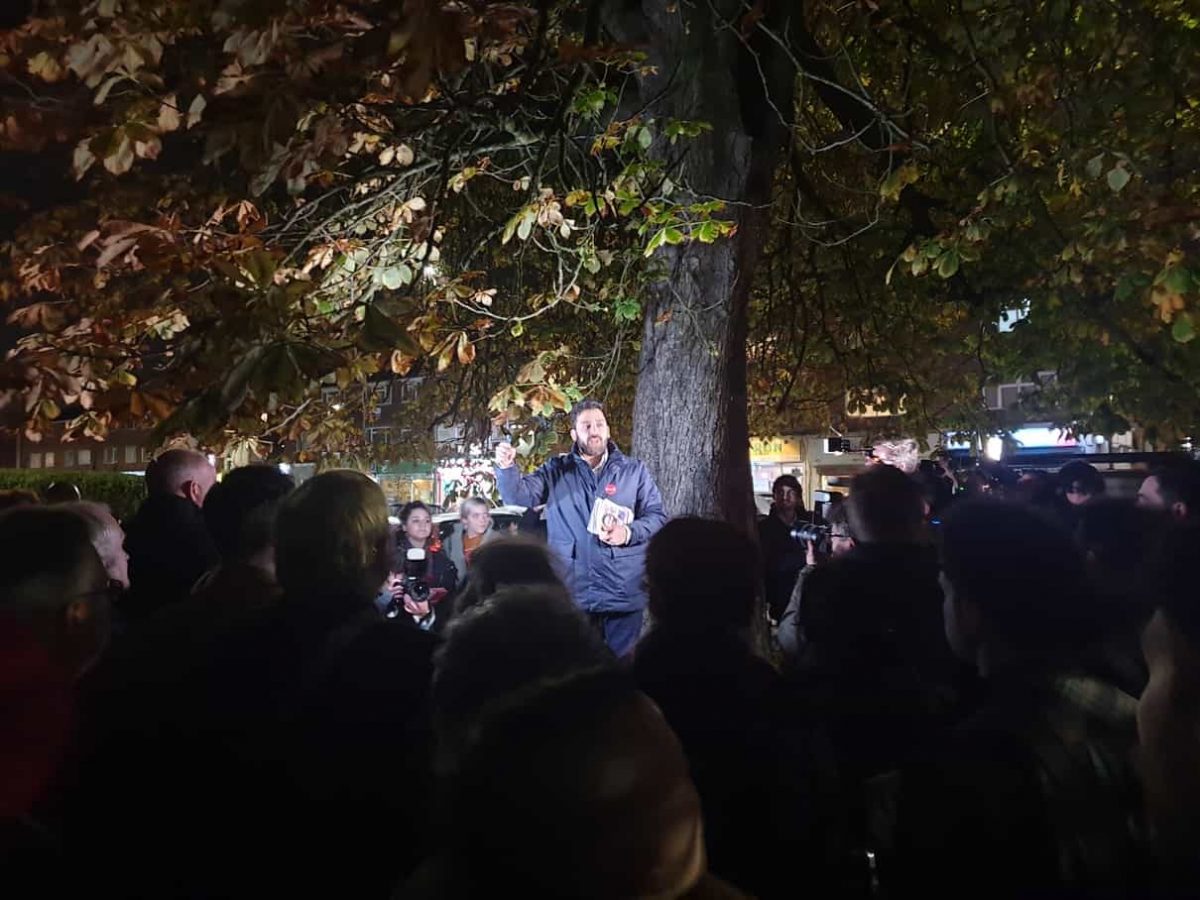 ‘Super, callous, fragile, racist, sexist, Nazi, Boris’ was the message to the Prime Minister tonight as Labour campaigners convened in his home seat of Uxbridge and South Ruislip.

Ash Sarkar took aim at the former London Mayor for calling black people “piccaninnies” and comparing Muslim women to “letterboxes” as she rallied the troops, crediting Ali Milani for representing the opposite of everything Johnson stands for.

On an evening commemorating political revolutionary Guy Fawkes it was the turn of a Muslim immigrant to plot a course to unseat a sitting Prime Minister for the first time in democratic history.

But as headline-grabbing and appealing as that might sound, it was Milani who injected the context that makes him, as Owen Jones put it, a contender for Prime Minister himself at some point along the line.

Addressing jubilant supporters, he said: “I want you to remember when you are out canvassing that we are not here to unseat Boris Johnson alone.

“We are here to tackle climate change.

“We are here to get Brexit sorted and to put it back to the people.

“We are here to deal with food banks and the poverty in our country.

“We are here to save our NHS and to tell Donald Trump and his small hands to go back to America”.

At the tender age of 25, Milani carries energy and enthusiasm while having a wise head on his shoulders.

And it could be the youth that is the undoing of Johnson come December 12th.

Speaking to The Guardian, first-time voter MaryJane Prendergast-Lister said she thinks the youth vote will go against the PM and that the focus will be on Brexit.

For those her age, “this is their first opportunity to have their say, though maybe there’s no point now,” she said, dressed up for Halloween on the day Johnson had pledged that the UK would leave the EU.

In order to topple the Prime Minister in his own seat Milani will have to overturn his 5,034 majority, which was halved in 2017 in the first election since the EU referendum.

Pitching himself as the “local candidate”, that’s something he believes to be achievable.

“I’ve studied here, I’ve worked here, I live here. I had surgery in the local hospital. I tell them on the doorstep: when Boris Johnson is ill, which hospital do you think he will be treated at?” he said.

“[Johnson] has no connections to this area other than as a platform for him to get to No 10. At the time it was a safe seat for him, though not any more.”

Has anyone even seen Boris Johnson?

It was a point touched upon by Sarkar in her opening remarks this evening.

“Has anyone even seen Boris Johnson around these parts?”

A lone Tory voter out to spoil the party claimed he had, but few others could confirm any sightings.

That could be crucial.

Milani intends to woo voters on local issues such as Johnson’s “betrayal” of residents on Heathrow’s third runway, and the future of Hillingdon hospital, parts of which are so dangerous and decrepit that child patients had to be moved out of its paediatrics department because it was deemed unsafe.

With the Prime Minister nowhere to be seen and Momentum pledging to flood the constituency in Milani’s support we could have the upset of a generation on our hands in north west London. Only time will tell whether Johnson can salvage his own seat.

Related: What is Boris Johnson hiding in Russian interference report ‘suppressed’ until after election?