Misleading Liberal Democrat letter sent to voters can't even help their party, all it can do is ensure a Conservative majority on December 12. 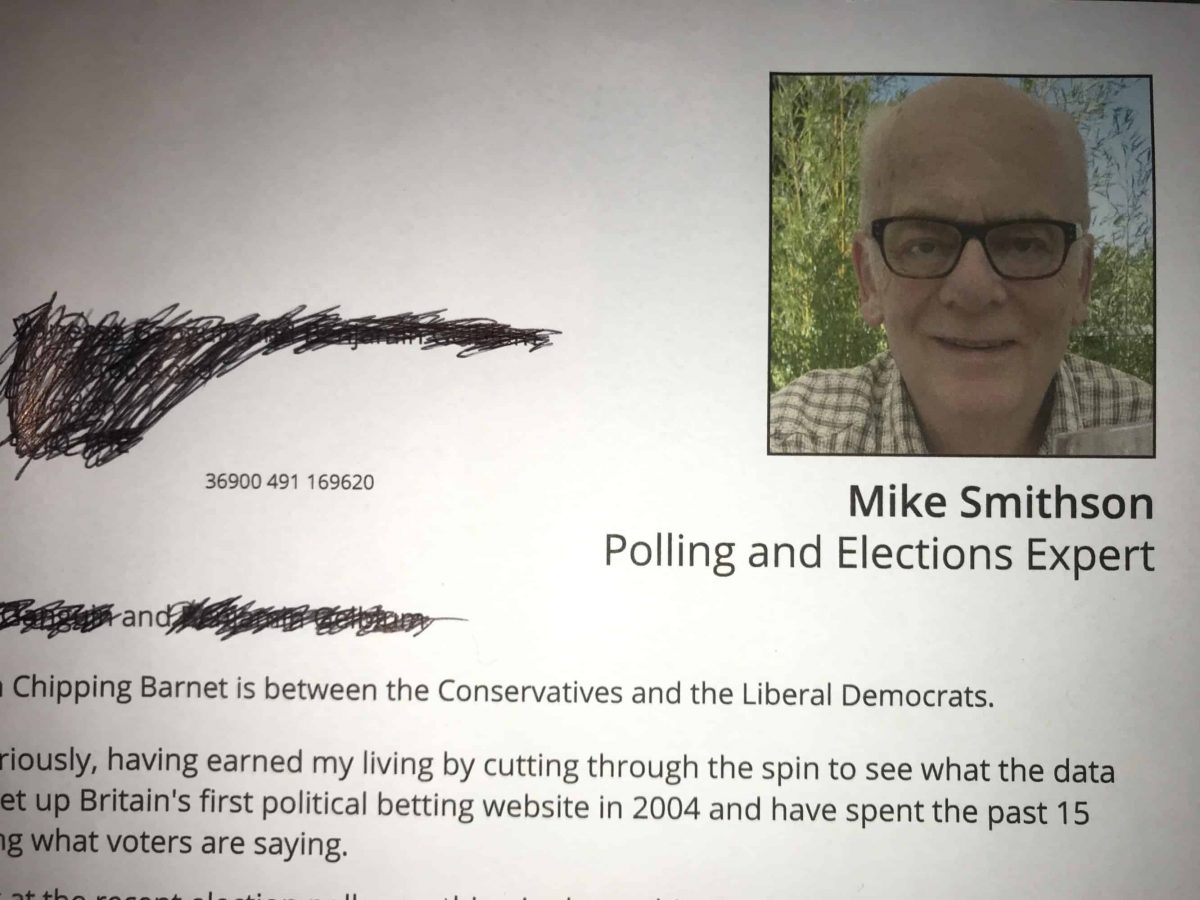 UPDATE: since this article was published we are receiving reports of letters like this all over the UK – including other constituencies where the Liberal Democrats are far behind in third place. please comment below or share a photo on our Facebook or Twitter page if you have received one of these letters.

At the last election in 2017 there were barely 300 votes between Tory DEFRA minister and Brexit champion Theresa Villiers and Labour’s Emma Whysall in the constituency of Chipping Barnet.

The Liberal Democrats have been panned for sending leaflets to voters with fake bar charts showing the party the likeliest to defeat Conservative contenders in two horse races which are actually two horse races between the Labour Party and the Tories. A local newspaper is now threatening to sue the LibDems for passing off campaign literature as voters’ local paper.

But take a look at this ridiculous letter sent in the post to voters:

It purports to be from Mike Smithson, a “polling and elections expert” with no indication that it is Liberal Democrat propaganda apart from tiny print at the bottom which says “published and promited by M.Dixon on behalf of the Liberal Democrats.”

There is also no mention that “polling and elections expert” Mike Smithson is a former Liberal Democrat candidate.

Much more serious than the concealing of Mr Smithson’s Lib Dem connections, is the lie in the letter disguised as genuine polling advice that “the election in Chipping Barnet is between the Conservatives and the Liberal Democrats.”

The seat is a tight two horse race – but one between Conservative MP Theresa Villiers and Labour’s Emma Whyshall. The Liberal Democrats don’t even get a look in.

In the last election the Tory party held the seat by just 353 votes.

When I put this to the Liberal Democrats, the reply from a spokesman was: “The letter reflected data that was correct at the time of printing. As is stated repeatedly in the letter, in these constituencies, Liberal Democrat success depends on Conservative voters lending us their vote.”

This is another blatant lie, as at no point could the letter have reflected correct data. The seat has stayed a two horse race by a long shot since 2017. The latest YouGov MRP polling has Labour and the Conservatives neck and neck at 41% in this constituency.

This misleading missive has no chance of getting a Liberal Democrat elected in the constituency, all it can possibly achieve is misleading enough voters to make sure Labour do not get the 300 or so votes they would need to unseat Theresa Villiers.

It is an expensive and underhand way of attempting to ensure Boris Johnson has a comfortable majority.

The Liberal Democrats refused to answer questions about how many other constituencies similar letters may have been sent to and why there is no mention of the “polling and elections expert” being a Liberal Democrat.

When contacted, Best For Britain were shocked and appalled to find out that they had been named in the LIbDem’s misleading leaflet.

Andrew Gwynne MP, Labour’s national campaign co-ordinator, said: “The Lib Dems have no credibility and should apologise for trying to mislead voters.

“The last time Jo Swinson and her party were as close to the Tories as these charts claim, they were in government voting for the bedroom tax, privatising the NHS, tripling tuition fees and cutting taxes for the super-rich and big business.”