Police are keeping an open mind about the motive for the attack. 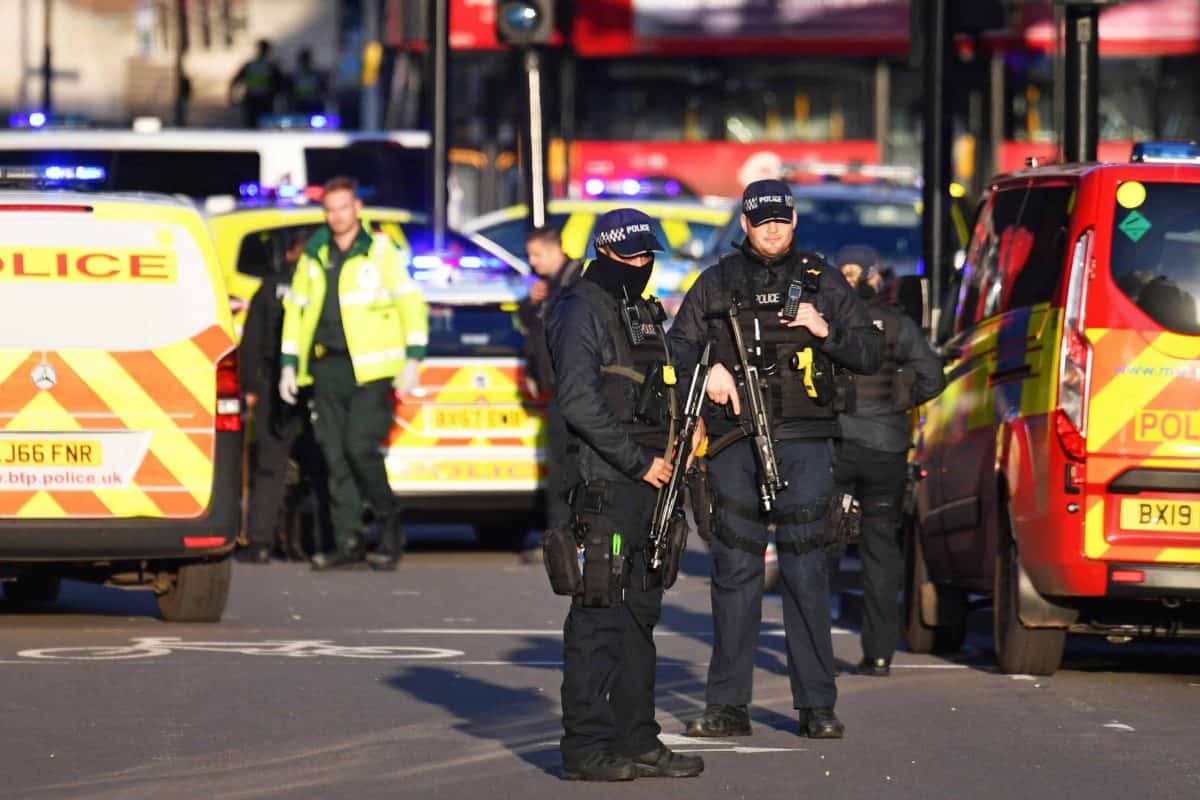 The incident took place on a busy, sunny Friday afternoon as the area – the capital’s business district near a major transport hub – began to swell with people heading to Borough Market for the evening or making their way home from work for the weekend.

Neil Basu, the head of UK counter-terrorism policing has confirmed a knifeman wearing a fake suicide vest has been shot dead on London Bridge after several people were stabbed at around 2pm.

He also added, importantly, that officers were keeping an open mind about the motive, and told a press conference a device strapped to the suspect was a hoax.

“At approximately 2pm today, police were called to a stabbing at a premises near London Bridge,” he said.

“Emergency services attended including officers from the City of London Police and Metropolitan Police.

“A male suspect was shot by specialist armed officers from City of London police and I can confirm that this suspect died at the scene.”

Several people were stabbed by the knifeman before he was grappled to the ground and disarmed by members of the public. Footage on social media appeared to show one man being pulled away by armed officers before the suspect is shot at point-blank range.

Another bystander could be seen carrying a large knife from the scene. Eye-witnesses said the suspect appeared to be wearing a suicide vest but Neil Basu, the head of UK counter-terrorism policing, said the vest was a fake.

He said police were called at around 2pm on Friday to a stabbing “at a premises near London Bridge”. Borough Market, at the opposite end of the bridge to where the suspect was shot, was cordoned off in the wake of the incident.

The bridge and the market were the scene of a terror attack in 2017 in which eight victims were killed along with the three terrorists. After being shot, the suspect in Friday’s attack raised his arms towards his head before lying still.

Mr Basu told reporters: “A male suspect was shot by specialist armed officers from City of London police and I can confirm that this suspect died at the scene.”

Scotland Yard said a number of people were stabbed but did not give any details. The London Ambulance Service declared it a major incident and one picture on social media appeared to show a body covered with a blanket. After speaking to reporters, Mr Basu said he was going to Downing St to brief the Prime Minister. Witnesses described a scene of panic around London Bridge, moments after the incident.

Images and footage of the incident posted online appear to show armed police pulling guns from a vehicle.

Some witnesses reported seeing what appeared to be a “fight” breaking out on the bridge, as a steady stream of people ran from the scene amid shouts from police officers to “keep moving” and a wave of emergency services vehicles raced into the area.

The entire bridge was cordoned off, nearby offices were put on lock-down with staff prevented from entering or leaving, and some businesses were evacuated.

Witnesses run for their lives

Witness Kelby McNally, OK! Online’s editor, works in the Northern and Shell Building on Lower Thames Street near to London Bridge, said she initially thought a fire alarm had gone when she saw “loads of people just running”.

She told the PA news agency. “There were loads of people just running, I thought it was a fire alarm or something, and then I saw two girls from my office who told me not to go back there. “I asked what had happened, and they said they had heard gunshots and now everyone is running.”

Prime Minister Boris Johnson said: “I’m being kept updated on the incident at London Bridge and want to thank the police and all emergency services for their immediate response.”

Home Secretary Priti Patel wrote on Twitter: “Very concerned by ongoing incident at London Bridge. My thoughts are with all affected. I am grateful for the rapid response of our police and I urge everyone to follow their advice.”

Footage from the scene appeared to show a white lorry straddling the northbound and southbound carriageways. The video shows several officers surrounding the vehicle before moving to the rear to check its container. London buses can be seen either side of the lorry while three police cars are parked next to it on the bridge.

Nurse Jackie Bensfield, 32, described how she asked to be let off a bus on London Bridge after she heard “five or six” gunshots. Ms Bensfield, who was on her way home from work, said she exited the bus and “ran like hell” to escape the shots.

Connor Allen, who was in his van on the bridge when it was evacuated said: “Everyone just started running, you heard these pops and that was it. We just got out the van and started running.”

One business owner told the PA news agency she had been crossing London Bridge to get to her shop on the north side when police officers stopped her. She said that was when she heard at least five or six gunshots and said that her store has been evacuated. The woman, who wished to remain anonymous, said: “We heard shooting, it was about five or six shots, I heard five or six quite clearly. “All my staff have been evacuated.”

Onlooker Zack Shooter told the PA news agency that police almost knocked him over as they ran towards the incident.

“Then loads of cars with sirens all rushed past me at full speed,” he added.]

In another video filmed from a nearby bus, passengers could be heard gasping in shock as they watched the apparent suspect being shot as he lay on the ground after another man ran from him, having retrieved a large knife.

Some could be heard screaming after more shots were heard, with someone shouting: “They’ve killed him.”

Nurse Jackie Bensfield, 32, described how she asked to be let off a bus on London Bridge after she heard “five or six” gunshots.

Ms Bensfield, who was on her way home from work, said she exited the bus and “ran like hell” to escape the shots.

Ms Bensfield, who was visibly shaken by the incident, said: “I just ran as fast as I could. Hearing gunshots and running from them is not really a good feeling.

“I was on the bus and there was a lot of traffic, but I remember it stopped. Then all of a sudden I see police officers yelling and people running off the bridge.

Connor Allen, who was in his van on the bridge at the time, said: “Everyone just started running, you heard these pops and that was it. We just got out the van and started running.”

Luke Redman, a 25-year-old data scientist, was in the Monument pub when police entered.

Salih Tasdemir was at Kaplan International College when he saw videos of the attack on social media.

“Then I saw police outside and there was an alarm inside the college,” the 17-year-old told the PA news agency.

“Then the police were telling us to leave.

“I was really scared.”