"Especially the type as the UK has proposed it, negotiated it, and signed the agreement up on it with us.” 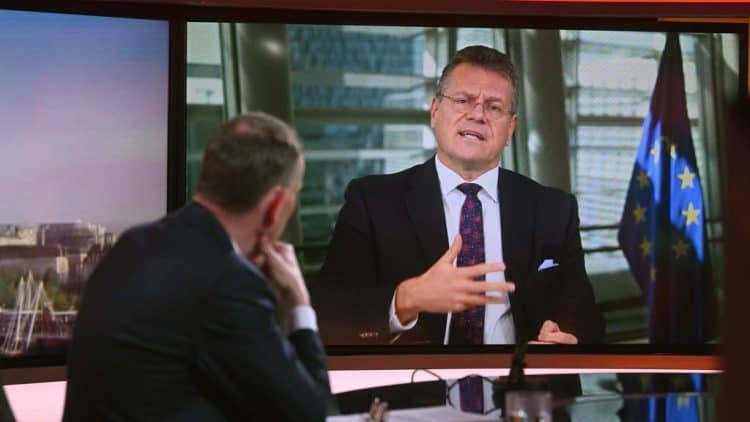 The EU has insisted it must have “an overview” of goods that could enter its single market amid calls for urgency over finding solutions to post-Brexit arrangements in Northern Ireland.

The UK and the EU have been locked in tense negotiations over the implementation of the Northern Ireland Protocol, which is designed to prevent checks along the Irish border.

The UK Government has said this is causing extreme disruption to businesses and livelihoods in Northern Ireland, but the two sides have been unable to reach an agreement on how to proceed.

Brexit minister Lord Frost has warned the UK will have to safeguard its position “in other ways” if consensus cannot be found.

Writing in the Mail on Sunday he said: “The current problems with the protocol go to the heart of our territorial integrity, of what it means to be one country and one market. They will not just disappear.

“I still hope the EU can show the ambition needed to fix the problem by agreement. If they can’t, of course we will have to safeguard our position in other ways.”

However, European Commission vice-president Maros Sefcovic said it was understandable for the EU to want oversight on goods which might enter its single market.

Lord Frost has proposed that goods which were not going to leave Northern Ireland could be treated in one way, while goods that may cross into the Republic were handled differently.

But Mr Sefcovic told the Andrew Marr Show: “Would the UK accept not to have the overview of what’s coming to the UK market? Would they accept it? I don’t think so.

“And you just simply have to understand that if something is coming to the EU single market that we have to have an overview.”

He said the EU had already proposed “gestures and solutions” from their side but added: “We cannot undo the Brexit, especially the type as the UK has proposed it, negotiated it, and signed the agreement up on it with us.”

Speculation has continued for months that the UK Government is preparing to trigger Article 16, which would suspend elements of the post-Brexit arrangements in place in Northern Ireland.

And Mr Sefcovic said he was doing “everything possible” to avoid that.

He said: “We had a change of tone in the discussions over the last week, which I really appreciate.

“Also our discussion of these practical issues like for example medicines was more constructive than before.

“So it’s a decision of the UK Government.

“We are doing everything possible to avoid it because, of course, it will have serious consequences, first and foremost for the people in the Northern Ireland but also for the EU/UK relations, and therefore I want to stay on this positive term.”

However, the Protocol has been fiercely opposed by unionists and loyalists, who object to the creation of a trade barrier with Great Britain.