The farm, which supplies Abel & Cole and Planet Organic, has sacked a worker for cruelty to animals in the wake of the investigation. 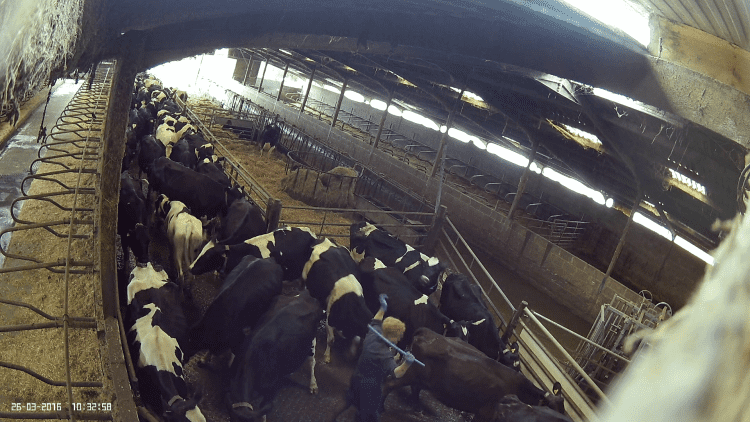 Shocking undercover footage has been released by an animal welfare group that shows cows being physically abused by workers at an award-winning dairy farm.

Animal Justice Project has been filming at Farmers & Growers dairy farm in Kelston, Bath over a period of seven months.

The farm, which supplies high-end cheese to Abel & Cole, Planet Organic and other retailers, is known as the best in its field, winning ‘Supreme Champion’ of the International Cheese Awards and several other important industry awards such as the Gold award for ‘Best Organic Cheese’.

It has a public café, has featured on the BBC and invites people to open days so they can look around.

But footage released byAnimal Justice Project appears to be at odds with their claims and public image.

As part of their ‘Milking It’ campaign, the video shows workers physically abusing the animals, with one kicking a cow in the face and hitting them with an alkathene pipe on their udders and legs.

The group also claim visitors are shown fake large pens that the calves are supposedly housed, whereas the reality is calves are housed in pens more like veal crates.

Professor emeritus of Ecology and Evolutionary Biology at the University of Colorado, Marc Bekoff, who also viewed the footage, said of the abuse: “It is never acceptable to hit and kick farmed animals, particularly when they have nowhere to go, as viewed in this footage.

“Cows can discriminate between people who handle them roughly and who are gentle with them. Thus, any form of abuse, even verbal, is likely to be remembered.

Responding to the allegations, Hugh Padfield told The London Economic that he was “horrified by the scenes of a herdsman hitting cows”, adding that it is “totally unacceptable”.

The member of staff involved, who was recently hired, has been sacked for cruelty to animals.

Padfield added: “Our ethos is to be open, friendly, accessible and honest in everything we do, which is why the farm has public viewing areas. Our aim is to maintain the highest standards of welfare on our farm and we expect our staff to adhere to these standards at all times.

“Our farm has public viewing access because our ethos is that we are a transparent and open business and we actively encourage members of the public to come and see what happens on our farm.

“We are concerned that the footage, which is highly edited to mislead, selectively chosen and portrayed with no context, does not represent what happens on our farm on a daily basis, where animal welfare is at the heart of all we do.”