“Despite all the grand statements… the British government continued to apply current rules that meant they did not welcome Ukrainian refugees." 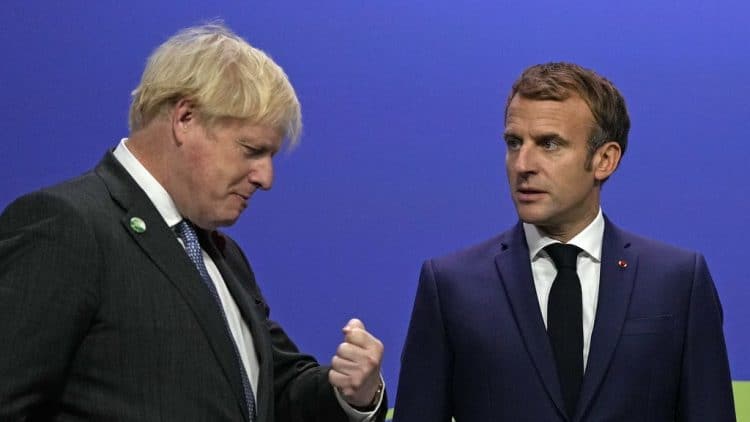 The UK Government has been condemned by French president Emmanuel Macron for failing to live up to its “grand statements” on helping Ukrainian refugees.

His comments came as the Government intends to further ramp up pressure on the Kremlin.

In an update on Saturday morning, the Ministry of Defence (MoD) said fighting to the north-west of the Ukrainian capital Kyiv continued, with the bulk of Russian ground forces now about 25 kilometres from its centre.

Elements of the large Russian column north of Kyiv have dispersed, the MoD added, which it said is likely to support an attempt by the aggressors to encircle the city.

“Despite the grand statements…”

Speaking at the end of an EU summit in Versailles on Friday, Mr Macron reportedly criticised Britain’s visa policy which required applicants to make them in person in Brussels or Paris.

According to The Guardian, the French president said this further exacerbated circumstances for those fleeing the war.

He added: “Despite all the grand statements… the British government continued to apply current rules that meant they did not welcome Ukrainian refugees who wanted to reach British soil saying they have to travel hundreds of kilometres in order to apply for a visa.

In response to Mr Macron’s reported remarks, the Home Office pointed to previous comments from Home Secretary Priti Patel, which stated: “We are now making the process quicker and simpler by removing the need to physically visit visa application centres for many of those who are making the perilous journey across Europe.”

On Thursday, Ms Patel announced that from Tuesday people will be able to apply online for a visa and will no longer have to go to a processing centre to give their biometrics.

Tony Stein, chief executive of Healthcare Management Solutions, suggested on Saturday morning that Ukrainian people fleeing the war could find jobs and a place to live through the UK care sector.

He told BBC Radio 4’s Today programme: “A lot of operators have job-related accommodation. And there must be a way, I think, of putting the two things together and helping some of the refugees coming over, who may well have the skills that we’re looking for… they may be nurses or people who’ve cared before who would be perfectly suited to roles in this country.”

Meanwhile, the Government is intending to further ramp up pressure on the Kremlin with plans to ban exports of luxury goods to Russia in the latest move to isolate Vladimir Putin.

Details of the plans will be set out in the coming days, Downing Street said.

It came as Boris Johnson joined with other G7 leaders on Friday to commit to further increase the pressure on the Russian president’s regime.

The group agreed to take steps to deny Russia “most favoured nation” status on key products, which No 10 said would significantly reduce the ability of Russian businesses to export.

Sharing the news on Friday evening, Foreign Secretary Liz Truss said the UK stood “united with our G7 partners”, and would “continue strengthening our response” to put a halt to Russia’s aggression against its neighbour.

But Labour said the ban on luxury goods “should not have taken this long”.

Nick Thomas-Symonds, Labour’s shadow international trade secretary, said: “Labour has been calling for weeks now for a ban on luxury goods being sent to Russia, so it is welcome that the UK Government have finally listened – but it should not have taken this long.

“We cannot allow Putin, and his cronies in Moscow, to live a Mayfair lifestyle while they kill innocent people in their illegal invasion of Ukraine.”

The announcement followed Britain’s sanctioning of nearly 400 Russian parliamentarians, with ministers seeking to “tighten the screw” on Moscow over the invasion of Ukraine.

Also on Friday, former Tory foreign secretary Jeremy Hunt argued the Russian invasion of Ukraine was “the biggest failure of Western foreign and security policy in our lifetimes”.

Writing in The Daily Telegraph, he said: “It happened because we forgot the most fundamental lesson of the Cold War: the power of deterrence.”

He added: “Instead of peace through strength we caused war through weakness.”

Mr Hunt also suggested the UK should increase spending on “defence, aid and soft power” to at least 4% of GDP over the next decade.

It came as the UN security council met at Russia’s request to discuss claims levelled by Moscow about biological activities in Ukraine.

Dame Barbara Woodward said Russia must not be allowed to “abuse its permanent seat” on the council “to spread disinformation and lies”.

Prime Minister Johnson has previously expressed fears Russia is spreading a “fake story” that the US or the Ukrainians have chemical weapons in Ukraine as a pretext for an atrocity.

The Ukraine crisis is expected to be a topic for discussion when Mr Johnson meets Irish premier Micheal Martin for talks on Saturday.

The UK has now sanctioned more than 500 high-value individuals and entities since the invasion of Ukraine began, while Russian aircraft, including oligarchs’ private jets, are banned from the UK.