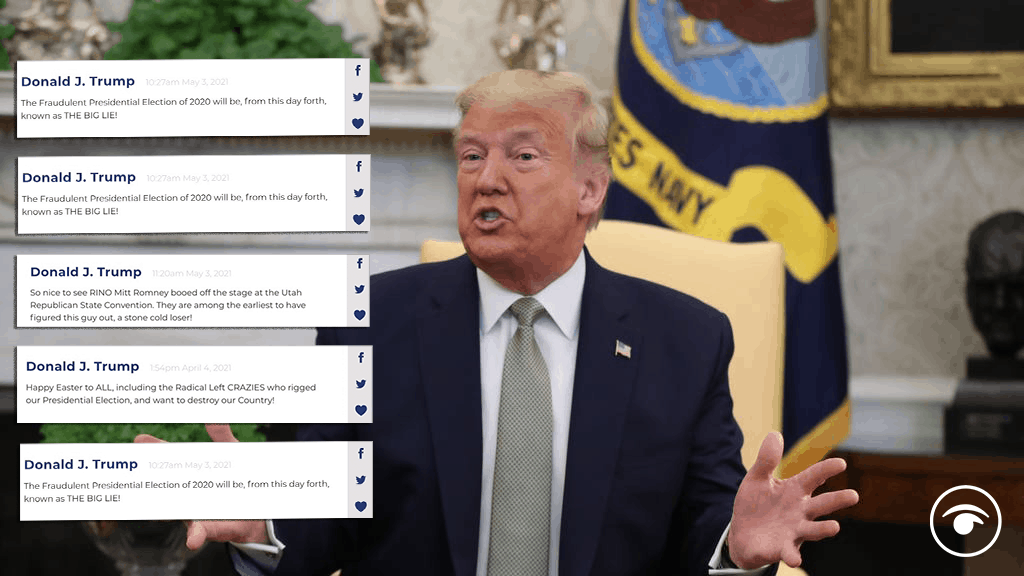 Donald Trump proclaimed the “fraudulent” presidential election of 2020 will be forever known as “THE BIG LIE!” as he launched his own communications channel.

From The Desk Of Donald J Trump looks like a Facebook or Twitter feed and contains short blog posts similar to those the businessman used to send from his social media accounts.

They can also make donations to the 45th president’s political action campaign.

Later on Wednesday, Facebook’s independent Oversight Board will announce its decision on whether the former president is to be permanently banned from the platform.

The board has the final say on key Facebook content moderation decisions referred to it, with the case of Mr Trump the most high-profile it has ruled on since it was set up last year.

A number of the posts already on the new feed, which appears to have been active since early April, make false claims and push debunked conspiracy theories about Mr Trump’s defeat to Joe Biden in the presidential election last year.

Other posts attack political opponents and the social media platforms themselves in a similar fashion to how the former president’s Twitter account operated before it was suspended.

Mr Trump was banned from Facebook, Twitter and a number of other platforms earlier this year for inciting violence, including failing to condemn and even praising rioters who stormed the US Capitol in January.

At the time, Facebook boss Mark Zuckerberg said the social media giant had taken the decision because Mr Trump had used the platform to “incite violent insurrection against a democratically elected government”.

Since leaving office, there had been reports that Mr Trump would look to create and launch his own social media platform as a way to get around his ongoing bans, as well as directly reaching out to his supporters.