Yesterday UK MPs voted through a policing bill which would ‘make a dictator blush’. 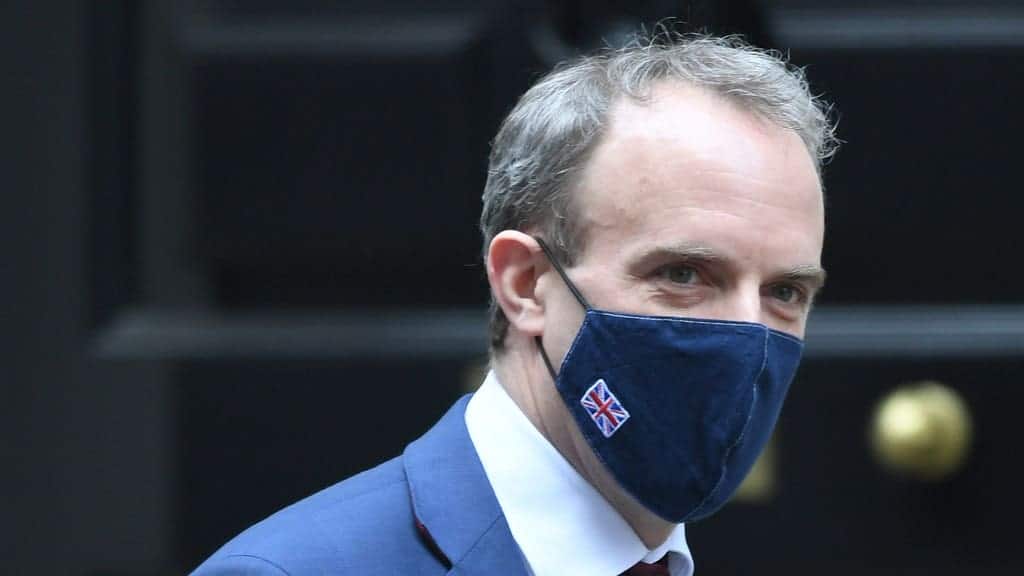 Democracy is “in retreat” around the world, Dominic Raab will warn as he sets out why the UK still has to play a major role on the global stage.

The Foreign Secretary will use a speech to warn that democracies and the institutions that underpin them are facing the greatest threat since the end of the Cold War.

Mr Raab’s speech at the US Aspen Security Forum will set out the UK’s new foreign policy approach at a time when autocratic states are set to eclipse the gross domestic product (GDP) – a measure of the size of the economy – of democracies.

His comments will come after the publication of the Government’s Integrated Review of foreign and defence policy which sets out plans for a shift in focus towards the Indo-Pacific region in response to the rise of China.

It comes as MPs voted through a controversial Police, Crime, Sentencing and Courts Bill in the UK which is set to increase the police’s power to crack down on peaceful protests, with campaigners warning that the government is seeking to “silence dissent”.

You laugh or you cry. https://t.co/pto5Dn0Xqc

“Democracy is in retreat”

But he was also facing questions after being heard telling officials the UK should strike trade deals with nations that do not meet international standards on human rights during a leaked video call.

“Tyranny is richer than freedom, and that matters to us here at home.

“Because stable, freedom-respecting democracies are much less likely to go to war, house terrorists or trigger large-scale flows of migrants, and they are generally, not always but generally, easier to trade with, and easier to co-operate with to solve our shared problems.”

He will insist the UK must be a “force for good” in the world “because without power, without economic, military, diplomatic, cultural clout, we can do nothing”.

The Integrated Review included plans for the UK to boost its nuclear arsenal and maintain a “cutting edge military and world-class diplomatic network” to secure British influence.

However, the UK’s aid budget has been cut as a result of the coronavirus crisis and the review did not set a date to return to the legally-binding target of spending 0.7 per cent of gross national income, only saying that commitment would be met “when the fiscal situation allows”.

Mr Raab will say: “The Integrated Review provides a road map, guided by our moral compass, our history, and our present day mission as a force for good in the world.

“From our inventors to our entrepreneurs, from our diplomats and aid experts to our brave armed forces, all the people involved in delivering global Britain share the unifying sense that we are part of a shared planet.

“We believe that we can and should help alleviate the worst suffering in the world, that we have a moral responsibility and an indivisible stake in our planet, our global economy, our global ecosystem and the conditions of peace and stability that underpin them.”

On Tuesday, Foreign Office minister James Cleverly was unable to say whether the 0.7 per cent target would be returned to next year.

“I can’t say for sure because we don’t know the duration of the economic impact of this disease,” he told BBC Newsnight.

In the leaked audio obtained by the HuffPost website, Mr Raab suggested Britain would not be able to strike many trade pacts in growth markets if it only dealt with nations that met the European Convention on Human Rights (ECHR) standards.

During a question and answer session with Foreign, Commonwealth and Development Office (FCDO) staff, Mr Raab said: “I squarely believe we ought to be trading liberally around the world.

An FCDO spokesman said the “audio has been deliberately and selectively clipped to distort the Foreign Secretary’s comments”, adding: “As he made crystal clear in his full answer, the UK always stands up for and speaks out on human rights.”

Related: Full list of MPs who voted through policing bill that would ‘make a dictator blush’