It has previously been described as the largest remaining working class demonstration in the country. 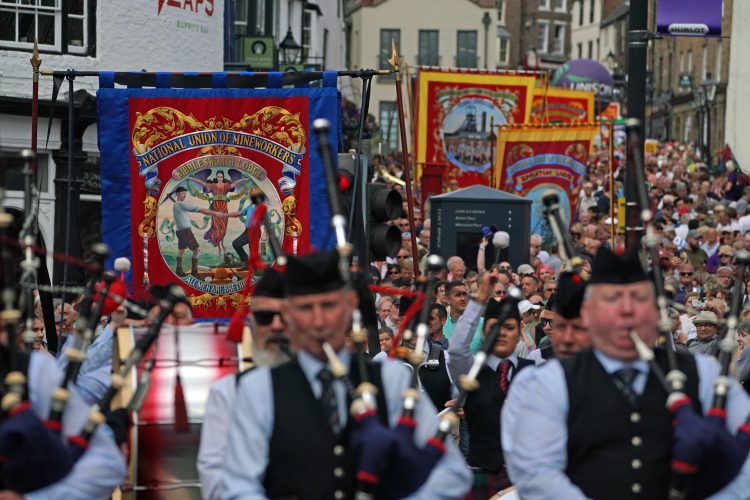 Labour leader Sir Keir Starmer is set to miss a trip to the Durham Miners’ Gala next month, unlike his two most recent predecessors.

One imagines the RMT’s Mick Lynch might be guest of honour after his recent heroics during TV interviews amid the rail strike.

The traditional trade union-backed event, known as the Big Meeting, attracts some 200,000 people to the historic city centre, where crowds watch processions of brass bands and banners.

The gala was cancelled in 2020 and 2021 due to Covid, and its return is dedicated to the key workers who kept society going during the pandemic – a decision organisers announced last year.

Sir Keir, who faces the so-called “beergate” police inquiry over his trip to Durham in April 2021, is not listed among the speakers at the gala.

A decision over whether he should be given a fixed penalty notice for drinking a bottle of beer at the offices of Mary Foy MP, days before the Hartlepool by-election, is due in the coming weeks.

Jeremy Corbyn and Ed Miliband both attended the Durham Miners’ Gala when they were party leader, watching the processions from a hotel balcony before speaking to large crowds gathered on the Racecourse Ground.

Before Mr Miliband went to the Gala in 2012, the last Labour leader to attend was Neil Kinnock in the 1980s.

It has previously been described as the largest remaining working class demonstration in the country.

The Durham Miners’ Association (DMA), which organises the event, said key workers will take pride of place on the County Hotel balcony.

And two will be chosen to speak to the crowds, alongside trade union leaders.

The DMA said the general secretaries of Unison, Unite, NASUWT and the UCU unions will make speeches.

DMA chairman Stephen Guy said: “We are proud to dedicate the 2022 Gala to our key workers and give our platform to them and their trade union leaders.

“As the pandemic showed so starkly, it is the key workers of this country that we truly need.

“They deserve much improved pay and conditions, but it is our key workers who are often bearing the brunt of the cost-of-living crisis.

“I urge everyone to join us in Durham to say a massive ‘thank you’ and to join with the DMA to say: ‘We demand better for our key workers’.”

Before the pandemic only national strikes and the two world wars had prevented the gala from going ahead.

Related: Watch: Corbyn says MI5 and MI6 undermined him as he calls Guardian ‘tool of the British establishment’