“Boris Johnson is a threat to our democracy” says John McDonnell 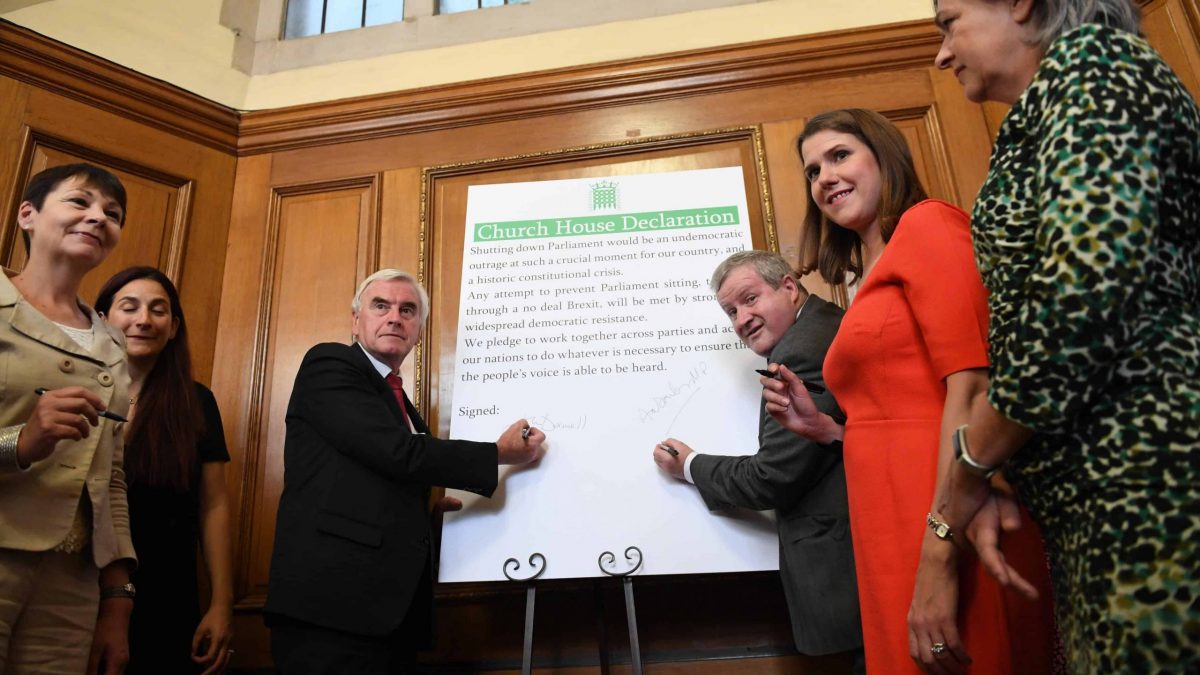 A cross-party group of around 160 MPs has signed a declaration to support doing “whatever is necessary” to stop a no-deal Brexit.

Boris Johnson has been warned he will face a parliamentary battle as opposition leaders and MPs from across the benches united around a plan to stop a no-deal Brexit.

The Prime Minister has repeatedly insisted that the UK will leave the European Union on October 31, with or without a deal. On Tuesday Boris Johnson told European Commission president Jean-Claude Juncker that Britain will leave without a deal unless the backstop is “abolished”. – This despite EU leaders explaining that they cannot leave Ireland without a peaceful border without Boris Johnson proposing a viable alternative.

Now, after cross-party talks led by Labour’s Jeremy Corbyn, a co-ordinated effort to thwart Mr Johnson’s plans has been promised by MPs opposed to leaving the EU with no deal whatsoever.

Meeting at Church House in Westminster – a meeting place for the House of Commons during the Second World War – the MPs signed what they are calling the Church House Declaration.

The declaration said shutting down parliament would be “an undemocratic outrage at such a crucial moment for our country, and a historic constitutional crisis”.

It warned: “Any attempt to prevent parliament sitting, to force through a no-deal Brexit, will be met by strong and widespread democratic resistance.”

Speaking at the event as Labour Leader Jeremy Corbyn was still in meetings, Shadow Chancellor John McDonnell said Prime Minister Boris Johnson was threatening democracy by not ruling out proroguing Parliament to push through a no-deal Brexit.

He added: “Prime ministers come and prime ministers go. But actually I don’t think we have ever seen a Prime Minister like this who has the potential to threaten the very nature of our democracy.”

Former Conservative ministers Guto Bebb, Dominic Grieve, Sam Gyimah and Phillip Lee are among those to sign the document.

Ms Berger said she would back MPs meeting at an alternative location – such as Church House – if Parliament was prorogued in order to push through a no-deal Brexit.

She said: “There are lots of things that MPs collectively can do together and we will have to make that decision if and when that moment definitively presents itself.

“The challenge at the moment is the hint of prorogation. The Prime Minister has failed to rule it out.”

She added: “I wouldn’t purport to be an expert on (parliamentary rule book) Erskine May, but the fact that we come together in this place, where MPs have in the past come together, and it has been officially recognised, is indicative of the fact that it could take place again in the future.

“We have come together because we face the hint of – the prospect of – a Prime Minister who might use tools like prorogation to subvert our parliamentary democracy and we will not allow that to happen.”

She continued: “I will certainly do everything I can within my means to hold the Prime Minister to account and to ensure he doesn’t pursue that reckless and very dangerous path.”

The text of the “Church House Declaration” reads: “Shutting down Parliament would be an undemocratic outrage at such a crucial moment for our country, and a historic constitutional crisis.

“Any attempt to prevent Parliament sitting, to force through a no-deal Brexit, will be met by strong and widespread democratic resistance.

“We pledge to work together across parties and across our nations to do whatever is necessary to ensure that the people’s voice is able to be heard.”

Meanwhile, Jeremy Corbyn has written to 116 Tory and independent MPs, including Theresa May and Philip Hammond, asking them to support efforts to block a no-deal Brexit.

The Labour leader said: “We know there is a majority in Parliament against no-deal. As MPs, we’ve voted against no-deal on a number of occasions and we did so in the largest number on March 27 of this year.

“As you were one of 116 Conservative or independent MPs who voted against no-deal that day and are not on the Government frontbench, I am writing to you to offer to work together, in a collegiate, cross-party spirit, to find a practical way to prevent no-deal.”

Meanwhile Boris Johnson  told European Commission president Jean-Claude Juncker that Britain will leave without a deal unless the backstop is “abolished”.

During a phone call on Tuesday evening, the Prime Minister told Mr Juncker that nothing short of reopening negotiations and removing the Irish backstop would be good enough for his Government to consider signing an exit agreement.

A Downing Street spokeswoman said: “The Prime Minister set out that the UK will be leaving the EU on October 31, whatever the circumstances, and that we absolutely want to do so with a deal.

“The PM was also clear however that unless the Withdrawal Agreement is reopened and the backstop abolished there is no prospect of that deal.”

A spokesman for the commission said Mr Juncker used the exchange to repeat his willingness to “work constructively” to look at “concrete proposals he may have, as long as they are compatible with the Withdrawal Agreement”.

Mr Juncker said the EU was “fully prepared for a no-deal scenario” but added that the bloc would do “everything it can to avoid such a situation”.

“No-deal scenario will only ever be the UK’s decision, not the EU’s”

“A no-deal scenario will only ever be the UK’s decision, not the EU’s,” he told Mr Johnson.

The backstop was a joint arrangement agreed between the UK and the EU in a bid to avoid border checks in Northern Ireland after Brexit. Former PM Theresa May signed Britain up to a number of Brussels rules to ensure an open border, until a friction-free solution could be decided.

During the discussion with Mr Juncker, the first the pair have had since July 25, Mr Johnson repeated what he told German Chancellor Angela Merkel and French President Emmanuel Macron during his visits to Berlin and Paris last week, by declaring that the UK would “never place infrastructure, checks or controls at the border” in Ireland.

The move effectively creates a stand-off between the two parties, with Mr Johnson testing the EU over whether it would demand Irish border checks to protect the integrity of goods in the European single market after the October 31 Brexit deadline.

Mr Juncker told the Conservative Party leader that the EU 27’s support for Ireland was “steadfast” and they would “continue to be very attentive to Ireland’s interests”.

Mr Johnson is set to send his EU “sherpa” – his Europe adviser David Frost – for talks with Brussels officials on Wednesday to discuss the backstop further.

The move comes after Mr Johnson said on Monday he was “marginally more optimistic” about the prospect of a deal following meetings with key players including Mrs Merkel, Mr Macron and European Council president Donald Tusk.

But there was still a “substantial disagreement” with Brussels over the terms of the existing deal, which has been rejected by MPs.

British officials believe there has been a “rhetorical shift” in recent days from the EU side, who have previously viewed the Withdrawal Agreement and backstop as “sacrosanct”.

While sources do not yet believe there has been a substantial change in the EU’s position, the UK wants to use the perceived shift to prise open space for negotiation.

Mr Johnson is due to meet Irish counterpart Leo Varadkar in early September for talks which are viewed as crucial if there is to be any movement on the backstop.

A Downing Street spokeswoman said Mr Johnson believed there would be enough time to achieve a revised deal before October 31.

Boris Johnson will face a parliamentary battle when MPs return to Westminster next week now opposition leaders agreed earlier on Tuesday to work together to stop a no-deal Brexit.

After cross-party talks led by Labour’s Jeremy Corbyn, a co-ordinated effort to thwart Mr Johnson’s plans has been promised based on passing new legislation when the Commons returns from its summer break on September 3.

The leaders agreed to prioritise a legislative approach rather than an effort to oust Mr Johnson.

Mr Corbyn confirmed he would not immediately push ahead with a move to replace Mr Johnson through a vote of no confidence.

That idea had met resistance because of his plan to lead a caretaker government. Other opposition figures had called for a compromise candidate who would be more likely to command a cross-party Commons majority as an interim prime minister.

Mr Corbyn said: “We are putting first the legislative proposal next week and that’s what the agreement was reached this morning to do, that’s what we are doing.

“The motion of no confidence will be put, by me, at an appropriate time but obviously not the first item next Tuesday, because I believe it’s important that we get on with a legislative process which prevents the Prime Minister acting in defiance of the will of Parliament – which was demonstrated by an enormous majority saying that we do not believe this country should crash out without a deal.

“The Prime Minister needs to respect Parliament and understand the role of Parliament is to question and challenge the executive.”

SNP Westminster leader Ian Blackford said Mr Johnson had “no mandate or majority” and the numbers were stacking up against him.

“Parliament must grasp this opportunity, unite to stop Boris Johnson shutting down democracy – and be ready to use all mechanisms to block a no-deal disaster, including deploying legislation as a priority,” he said.

Liberal Democrat leader Jo Swinson said: “I am pleased the meeting focused on a legislative route which we have agreed is the best way forward and are now looking at all the scenarios to deliver this.”

Independent Group for Change leader Anna Soubry said: “We agree we will work together to stop a no-deal Brexit by legislation.”

Plaid Cymru leader Adam Price said: “We committed to work co-operatively with every other opposition party and do everything in our power to avoid a catastrophic crash-out Brexit.”

Over the coming days contact will be maintained at lower levels, with representatives “wargaming” strategies to create a legal barrier to a no-deal Brexit.

Mr Corbyn said he would put forward a proposal for the process, but the legislation would be a cross-party effort with support from some Conservative MPs.

“Boris Johnson is now making progress because it is clear we will be leaving the EU on October 31st – no ifs, no buts. All Corbyn offers is more delay and uncertainty.”