Doctors' union BMA has projected the number of deaths on to its headquarters with the message “we will never forget”. 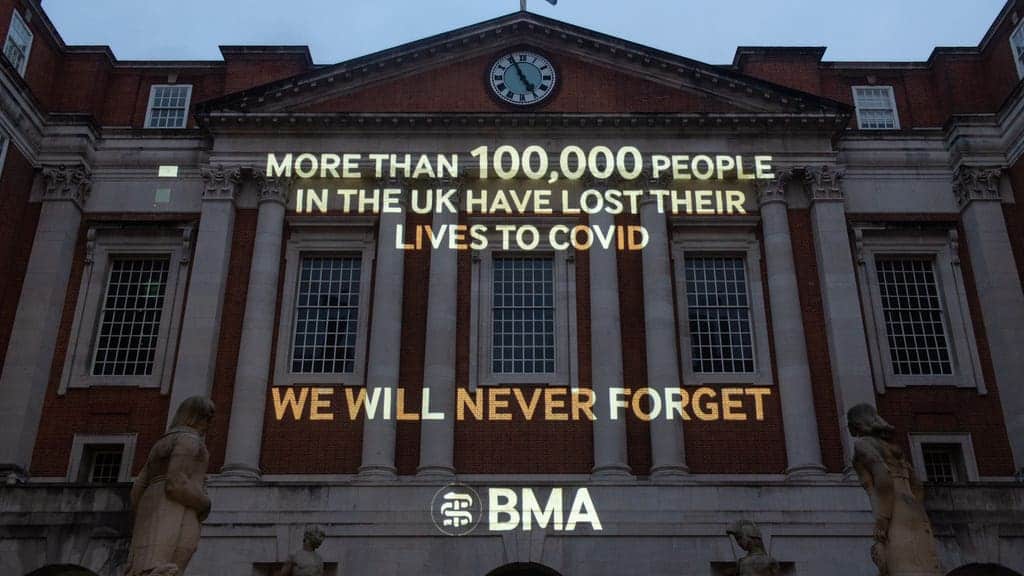 The Conservatives have taken a five point lead over Labour in the polls thanks to a ‘vaccine bounce’.

In a rare pandemic success, the government is winning praise for its vaccination programme which has seen it produce double the number of vaccinations per person per day of any other European country.

More than six million people in the UK have received a first dose of a COVID-19 vaccine to date as part of the largest vaccination programme in British history.

According to the latest polling this has led to a bounce in the polls for the Tories, despite their questionable pandemic response up to now.

New figures from the UK’s statistics authorities show there have now been 108,084 deaths where Covid-19 was mentioned on the death certificate, with 98,450 in England and Wales plus 2,186 in Northern Ireland up to January 15, and 7,448 in Scotland up to January 17.

The chairman of the doctors’ union has reflected on the “unimaginable” loss of life from Covid-19, as he paid tribute to the hundreds of healthcare workers among those.

Dr Chaand Nagpaul, a GP practising in north London and chairman of the British Medical Association (BMA) council, said lessons must be learned to prevent more “excessive” deaths from occurring, and that the world needed to prepare for another “inevitable” pandemic.

To remember those who have died, the BMA projected a message on to its headquarters in Tavistock Square, in Bloomsbury, London, with the message “we will never forget”.

Speaking to the PA news agency, Dr Nagpaul said: “The projection at BMA house is a moment to pause and reflect on the tragic loss of life that has wreaked havoc on our nation from this dreadful disease.

“This time last year it would have been unimaginable that we would have lost more than 100,000 people from a new virus in the space of just 11 months.

“It’s sometimes hard to comprehend what these statistics mean, but behind each number is a real person – a parent, a child, a friend who has left behind grieving loved ones.”