The environment bill, a centrepiece of Boris Johnson's 'green industrial revolution', has been put off until autumn at the earliest. 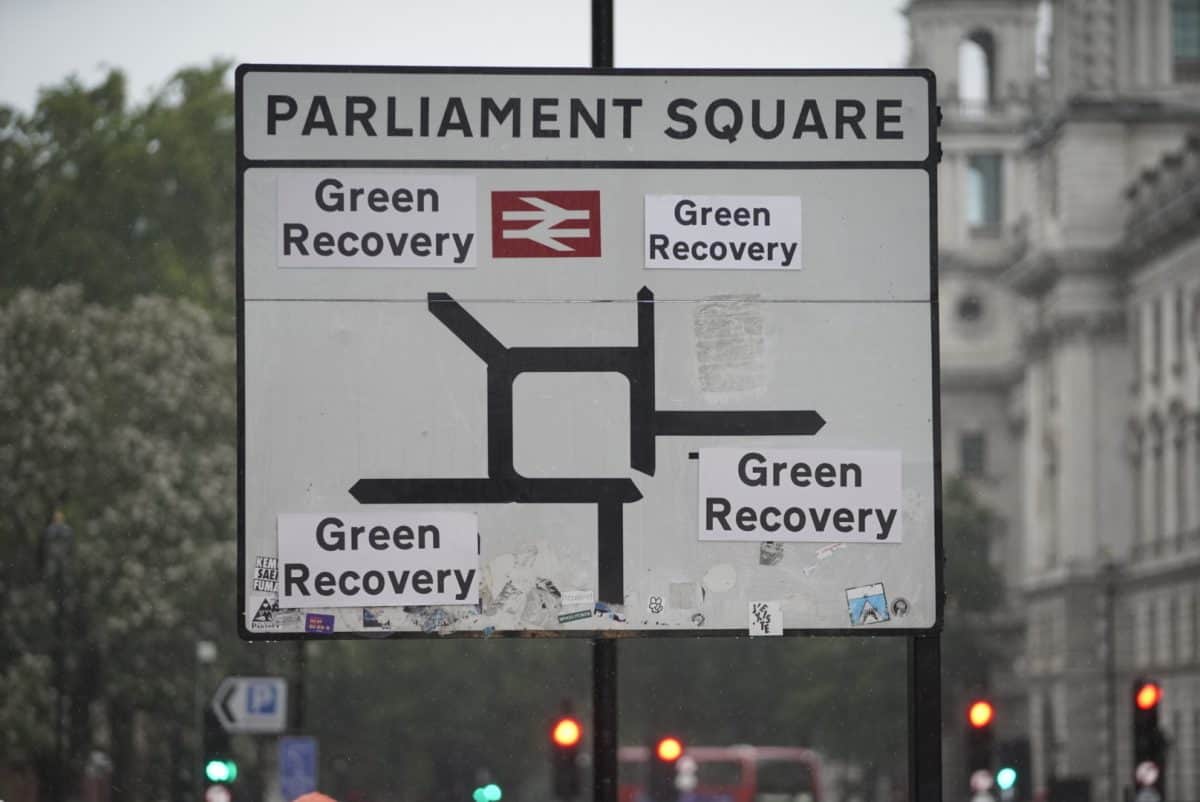 Greenpeace activists replace the destinations on the road signs around Westminster to read ‘Green Recovery’. Sending a message to the government that it only has one option with its economic recovery package, and that much greater investment is needed to green the transport, energy, housing and waste sectors, create new green jobs and tackle the climate emergency.

Boris Johnson has delayed his long-awaited environment bill, a landmark piece of legislation which promised to rewrite green rules and regulations following Britain’s departure from the European Union.

Campaigners lashed out at the delay, claiming it would hinder action on air pollution, water quality and wildlife protection. The legislation includes setting targets for air quality, water, biodiversity and waste reduction – and outlines what standard must be achieved by when.

It also includes measures to ensure UK consumers no longer contribute to the destruction of forested land overseas, through new rules aimed at stopping the import of goods from areas of illegally deforested land.

Ministers said the delay – which means the flagship legislation is unlikely to pass before the autumn – was necessary because dealing with the coronavirus crisis left too little time for parliamentary debate.

Rebecca Pow, minister at the Department for Environment, Food and Rural Affairs, said: “We remain fully committed to the environment bill as a key part of delivering the government’s manifesto commitment to create the most ambitious environmental programme of any country on earth.

“Carrying over the bill to the next session [of parliament] does not diminish our ambition for our environment in any way.”

But the delay is a setback to the UK’s efforts to establish itself as a global pace-setter on environmental action, in the year it will host the crucial UN Cop26 talks in Glasgow this November.

Pow promised that work on the bill – which was first announced in July 2018 and introduced in 2019 – would continue, including the establishment of the Office for Environmental Protection, a new environmental standards watchdog.

But campaigners said this was the third time the bill had been delayed – and voiced fears that the new watchdog will not be independent or powerful enough without new legislation.

Rebecca Newsom, head of politics at Greenpeace UK, said: “Time and time again the government tells us that ‘urgent action’ is needed to restore nature, that it will ‘build back greener’ and that we can’t afford to ‘dither and delay’.

“What then is it playing at by delaying the most important piece of environmental legislation for decades?”

He said: “Recently, the Prime Minister explicitly committed to taking urgent action to put nature on a path to recovery by 2030 as part of the UN ‘Decade of Action’.

“But over a year into the decade, very little progress has been made. To make up for lost time, the Government must substantially ramp-up its environmental ambition.

“This must start with putting a legally-binding target to reverse nature’s decline by 2030 on the face of the Environment Bill when it returns, and proper funding for landscape recovery to deliver it.”

Others, including the Labour Party, said the decision to postpone the legislation would damage the UK’s credibility ahead of Cop26 and other international environmental summits.

Shadow environment secretary Luke Pollard said: “In the year when Britain is hosting the Cop26 climate talks, it sends all the wrong messages about the Government’s approach to the climate crisis, if this bill is not prioritised and it doesn’t reach the statute books until the autumn.

“We don’t need a go-slow government on the environment, we need one that recognises the urgency of the crisis and doesn’t go backwards, like they’re doing by lifting the ban on bee-killing pesticides.”

Ruth Chambers of Greener UK added: “The UK government has consistently claimed environmental leadership, but after four years of delays we are still without crucial laws to restore nature and tackle climate change. Ministers must now use this extra time to improve their plans around upholding green laws.”

The National Trust said the government should be prioritising the environment bill – not putting it on the back-burner.

Harry Bowell, director of land and nature at the trust, said:  “Our environment continues to decline, with species and habitats being lost and climate change impacts increasing.

“Now we are outside the EU, we urgently need our own laws to protect and restore our environment – not delays.”